“Battenfield shares her success stories but also discloses her professional foibles, which creates a sense of ‘we are all in this together’.” 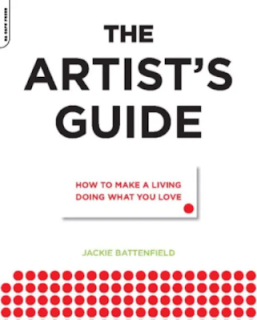 Under normal circumstances, is The Artist’s Guide: How to Make a Living Doing What You Love (Jackie Battenfield, Da Capo Press, 2009) a book that I would stay up into the wee hours of the night reading? Most likely, yes. I read it cover to cover on the bus ride to Canada, finishing it while the sun rose over Burlington, Ontario this morning. Because of the organization of information, it functions like a reference book so readers could also easily skim it for an overview of the issues they may face during their careers and then revisit particular chapters on an as-needed basis. Another way that it acts as a reference source is by including annotations of recommended books at the end of each chapter.

I really like the tone of Battenfield’s writing, which is firm, but not heavy-handed, not to mention empathetic. Her voice has not been diluted to the extent that it sounds neutral; the advice sounds like it is coming from a mentor or teacher. Battenfield shares her success stories but also discloses her professional foibles, which creates a sense of ‘we are all in this together’. I think this tone is very appropriate, especially after leaving the author’s presentation at the NYPL the other night. I rode the elevator with a group of artists who sounded excited to take control of their careers, but there was definitely a collective hint of trepidation that made the enclosed space seem a bit suffocating. Her ability to establish trust and camaraderie with the reader, if such a thing is possible in a one-way exchange, is a strength of this book. Her presence is not overwhelming though; it is not as though the book reads as one woman’s journey through the art world. Even if it did, Battenfield has balanced her own perspectives by including side bars of quotations from arts professionals about topics as varied as proposal writing and tax preparation.

Unlike so many artist career guides, this one has pictures, and lots of them. Occasionally they are images of work by an artist who has been quoted in the book so their presence is not critical (though it is certainly welcome), but usually the images are of artworks that illustrate a specific point. Since artists are visually oriented and presumanbly, many of them are primarily visual learners, breaking up the text with images shows that Battenfield really knows her target audience.
Book cover reproduced in 2020 via fair use/dealing. Source: https://www.hachettebookgroup.com/titles/jackie-battenfield/the-artists-guide/9780786748068/
Posted by Heather Saunders at 5:57 AM