Chick lit in the kitchen


"Her apron has the seemingly innocuous moniker, 'The Happy Baker' embroidered on it--innocuous unless you've heard of a little book called The Happy Hooker..."

I arrived at the YYZ airport shortly before 5 am today, and I suspect I would have fallen asleep standing up had I not brought along some supremely sweet caramels. Yesterday was chilly in Toronto, so it was nice to stir caramel over the stovetop. The tasty combination of chocolate, caramel and sea salt made me a little less sad that Starbucks' signature salted caramel hot chocolate is no longer available.

The recipe was printed in The Toronto Star on Friday to promote the book, The Happy Baker: A Dater's Guide to Emotional Baking (Happy Baker Publishing, 2009). Toronto-based Erin Bolger invites the lovelorn to find solace in baked goods. The format of her chick-lit cookbook, as she calls it, is a mixture of recipes and laughable tales of dating that are bringing her acclaim. The concept alone makes me nostalgic for the book, Like Water for Chocolate by Laura Esquievel in which recipes punctuate the story and function as romantic narratives unto themselves. Meanwhile, Bolger's recipe names--such as 'Internet Dating Fondue' and the aforementioned caramels (full name: 'It's Not Me It's You Sea-Salted Caramels')--make me want to watch the 2007 movie Waitress again. Its female lead, Keri Russell, plays Jenna, a woman seeking escape from an abusive marriage. She makes pies for a restaurant in the American South with such memorable names as 'I Don't Want Earl's Baby Pie' and 'I Can't Have no Affair Because it's Wrong and I Don't Want Earl to Kill Me Pie'.

The Star review by Susan Sampson presents Bolger as a kitchen-savvy Carrie Bradshaw, an image that Bolger evidently encourages. Her Twitter page, for example, shows a photograph of a woman's glossy pink lips about to envelop a cupcake held by manicured fingers (painted pink, the same colour as Bolger's hammer and apron in a photo on her MySpace page). Her apron has the seemingly innocuous moniker, 'The Happy Baker' embroidered on it--innocuous unless you've heard of a little book called The Happy Hooker by Xaviera Hollander.

Make no mistake: I am not passing negative judgment. In fact, I would argue that Bolger endorses female empowerment (through wielding a hammer in the kitchen and choosing recipe names like 'Who Needs a Man on Valentine's Day Biscotti'). The endorsement is suitably packaged for a generation of readers raised on BUST magazine, although the Ms. generation may feel bewildered and the in-between Sassy generation divided. 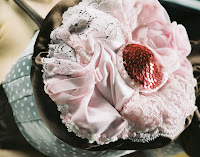 (Double click to enlarge image.) Admittedly, I am intrigued by the line Bolger is treading. The reason is that I have been making sketches over the past few days for a skirt and apron to accompany my 'cupcake bra' that is on exhibit until June 28 at the Port Moody Art Centre in British Columbia. Sugar & Spice, shown above, is a feminist response to the early and persistent association of the cupcake with females, which is visually represented by icing that consists of juxtaposed fragments of lingerie and baby dresses. The displacement of breasts presents cupcakes as fetish objects. Further prompting male fantasy and conjuring images of women jumping out of cakes at bachelor parties are the red pasties. Not only do they stand in for cherries, which are cupcakes’ characteristic topping, but they play on the sexualized slang term ‘cherry.' Oversized and oversexed, these cupcakes allude to women’s body issues like augmentation and gluttony. Also referenced is the (sometimes conflicting) dual role of breasts, as providing sustenance and sexual pleasure.

On the topic of bodily issues, the release of The Happy Baker may be perfectly timed--as Barbara Amiel wrote in last week's issue of Macleans, First Lady Michelle Obama has promoted such a healthy body image that women might end up worrying that they are too thin. Erin Bolger comes to the rescue, noting on her blog, "If any of my recipes are low fat, I'm sorry, it wasn't intentional." Three cheers for ushering in a new era of how women view their bodies.

I made sure to finish off every last morsel of caramel that I had brought to the airport. After all, I could just picture the confusion/displeasure that might otherwise arise when clearing customs:
Q: Do you have anything to declare?
A: Yes. It's not me, it's you.

Posted by Heather Saunders at 8:23 AM