The one and only

I think I’ve found some answers to my questions from my last post, thanks to the chapter ‘One and Only One Correct Interpretation’ from Joseph Margolis’ The Arts and the Definition of the Human (Stanford University Press, 2009). My first attempt to read this philosophy book was compromised by the sound of teenage girls on the Metro North train snapping their gum and chattering so loudly that I can only assume their generation is near-deaf from overusing portable listening devices. Oh dear, I hope I’m not going to become one of those shushing librarians.

Magnolis argues against the notion that there is but one correct interpretation of a work of art, and against the concession that multiple interpretations are possible only if they are compatible. The essence of his argument is that art is not objective, exemplified by his question, “...is the meaning of a poem simply the meaning of its words?” In keeping with the poetry analogy, he could easily quote Yeats' exquisite line, “...how can we know the dancer from the dance?” because one of his many arguments centres around intentionality and the presumed inseparability of the artist from the artwork. I won’t get into the minutiae of his other arguments because I don’t have a background in philosophy, but I will touch on this one as a follow-up to my previous blog post.

He states that artworks contain intentional properties, unlike physical objects that occur naturally in the world. I think of this as ‘Rather than finding artworks in the world, we make them and share them with the world’. Of course, sometimes artists use 'found objects', most famously Marcel Duchamp who exhibited a urinal and turned art history on its head, but let’s disregard that complication for now, shall we? While Magnolis doesn’t entirely disagree with philosophers who insist that artists’ intentionality is of great import (Arthur Danto, for example, sees intention and interpretation as inextricably intertwined), he says that interpretation shouldn’t depend on awareness of the artist’s motivations.

To bring this idea out of the realm of philosophy and into the gallery setting, it would mean that viewers should be able to appreciate art without an artist’s statement. I suppose I agree with this in principle, but what does it mean when the artist consciously approaches art making differently to encourage appreciation in the absence of expository text? 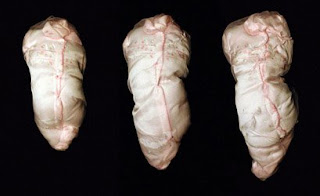 I have no qualms about admitting that the inability to include an artist statement in many gallery submissions has prompted me to change my cocoon sculptures. My Aberration Series (above) is an outgrowth of this concern; I felt that having three works represent a cocoon at different points in time was a better surrogate for my artist statement than one-offs.

Another point that interests me is that we cannot separate the artist from human culture. Magnolis gives the example of Michelangelo Buonarotti’s Pièta, the marble sculpture of Mary holding her crucified son, which really is as beautiful in person as you would expect. He sees the act of chiseling the sculpture as the artist giving form to a mental image but also as the application of an age-old tool, which is a compelling way of merging philosophy, anthropology, and art. Without the development of tools, the Pièta could not exist in its present form. Likewise, my art is not just the product of one person’s inability to let a problem go; it’s the byproduct of human invention and it binds me to a lineage of people armed with needle and thread. There are two things I really like about Magnolis’ perspective: (1) it could be just the ticket for reuniting art and craft, which didn’t always occupy separate classes and (2) it could be extrapolated into a feminist take on art history because it minimizes the emphasis on great masters and by association, male genius.
Posted by Heather Saunders at 8:25 AM