Out of the (glossy) mouths of babes


“While Doonan’s account of ‘tarted up tots’ vying for ‘the pink spotlight’ may have been tongue-in-blushed-cheek, he took an objective stance on pageants that bordered on defensive.” 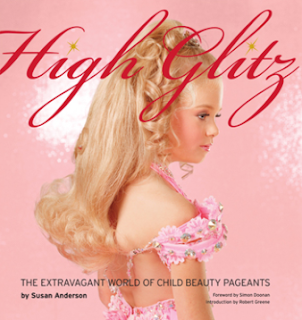 Barbie may be 50 this year, but her youthful likeness thrives in today’s beauty pageant world. I thought so instantly when I saw Susan Anderson’s photographic portraits of child contestants at a book launch and discussion held at Brooklyn’s Powerhouse Arena on Thursday night.

Viewing the homogeneous group of petite pretties featured in High Glitz (2009, powerhouse Books), I had two reactions in quick succession. Initially, I experienced shrill delight at seeing the prominence of feminine signifiers; it means that I have no shortage of inspiration for my artwork, which is about gender socialization through clothing, or simply put, why little girls like pink. Once this excitement subsided, I felt nauseated. Maybe if I watched the TLC show, Toddlers & Tiaras, I would have been prepared for the degree of artifice. I was aghast at the fake eyelashes, fake tans and fake dental veneers that replaced fresh-faced girls with tiny versions of over-processed women. Truthfully, I felt like the entire cohort of ‘popular girls’ from my high school was staring me down, reminding me of their supposed superiority. I felt freaked out for today’s generation of young girls, but I also felt freaked out for adolescent and adult women. The photo of a girl in a high-cut swimsuit that showed off her hairless body served as a scathing reminder that women in their natural state are incompatible with society’s notion of attractiveness.

I have spent more time and more money than I would like to admit sourcing out little girls’ pink formal wear from clothing stores to use in my artwork. At the checkout, there is the inevitable cooing from sales clerks and fellow customers, none of them realizing that my purchase is the first stage in a feminist critique. I felt a similar feeling of being the odd-one-out at this event, both when the audience cheered for the real-life pageant winner who graced us with her presence, and when Barney’s creative director Simon Doonan read his essay from High Glitz. Everyone laughed at all the right parts while I scribbled frantically in preparation for this blog post. While Doonan’s account of “tarted up tots” vying for “the pink spotlight” may have been tongue-in-blushed-cheek, he took an objective stance on pageants that bordered on defensive. He praised them for teaching skills like endurance, and cautioned against knee-jerk reactions, saying that it’s “easy to act disdainful and superior.” Slinking down in my seat, I felt like the feminist curmudgeon, a stereotype that I detest.

Anderson, a Los Angeles-based artist, also took a fairly neutral stance. Although she is “not a performer,” she said that if she had a daughter, she would not be opposed to her entering pageants. Anderson also emphasized the dedication of contestants’ mothers being on call for their daughters during 14-hour days, with their tasks ranging from sewing sequins to curling ringlets. Hearing Anderson speak about her series, I perceived the stellar portraits as having an anthropological bent, but it disturbs me that they could just as easily be featured in a pin-up calendar if the subjects were older.

I tried to follow their lead and be more objective in my reaction. Thinking about the fact that the subjects selected their own props and posed themselves, I conceded that they had a role in constructing their identity. But that made me think back to Grade One, when many of my classmates elected to dress as Madonna for Hallowe’en, oblivious to the fact that they looked like prostitutes. Looking at Anderson's photo of a little girl wearing Go-Go boots and a mini-skirt, or a backless, off-the-shoulder dress, I got shivers, thinking that the pageant contestants don’t even understand the implications of their attire. Doonan, however, defended the over-the-top nature of pageant aesthetics: it is “like Liberace, like Elvis, like Siegfried and Roy—it’s fabulous.” But is it fabulous to cast girls in sexy roles and to suggest that their worth hinges on their looks? Is feminist antithetical to fabulous?

Later, I ruminated on Doonan’s comment that it is “easy to act disdainful and superior,” asking myself if making critical feminist art is easy. I don’t think so. For one thing, I struggle with hypocrisy. I can ask scholarly questions about gendered preference, but I am not opposed to buying my niece a fancy pink dress for a Christmas gift because let’s face it, she’ll love it. And she is not alone. Looking at the portraits in High Glitz, the pageant winner remarked to the audience, “All the dresses look pretty and their hair.” Out of the mouths of babes…