“It was disappointing to learn that my ‘gender aptitude’, or what I think of as gender conformity, was precisely in the middle of the spectrum, under the category ‘gender novice’. Ouch.” 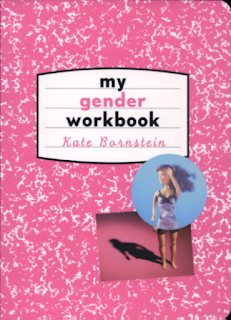 In spite of a minor car accident that foiled our Canadian Thanksgiving plans, my husband and I made it to Toronto in time to catch the public preview of the Textile Museum of Canada’s BMO Shadowbox Fundraiser, which includes a piece by me. Once we boarded the overnight bus on Tuesday, I asked for my passport back. My husband held both of them out and quipped, “Which one of us do you want to be?” To appreciate the joke, you need to know that in my post-grunge oversized knit sweater phase, and when he had long hair, we were mistaken for each other from behind on more than one occasion. The joke was also in response to my reading material, Kate Bornstein’s My Gender Workbook (1998, Routledge).

I found the book accidentally at Bluestockings in the Lower East Side of Manhattan while looking for theory to contextualize a bibliographic analysis of feminist erotica that I am planning with a colleague. For once, I had a commercial transaction related to my art that didn’t embarrass me. Maybe it’s because the prospect of being taken for the brave sort of person the book is geared towards is flattering. Written by a transgender author, My Gender Workbook is intended for individuals who currently transgress gender or are flirting with the idea of it. Bornstein points out that even asking questions about gender is transgressive, so it could be argued that as an artist, I am marginally part of the target audience. However, while I regularly ask questions about gender in my work, it’s on a societal level, not an individual level. Even so, based on my latest blog post, I thought it might be prudent to see where more self-reflection could take my practice.

It was a treat not being the one asking questions about gender for once. From the many open-ended questions, I felt my most noteworthy answer was to the question, “What does simply being the gender you were assigned at birth give you?” (p. 68). My answer? “Consistency.” From the many multiple choice questionnaires, the answer that most resonated with me was the question about defining gender: “Gender is what happens to me when I get dressed in the morning” (p. 15). In my art, I argue that clothing is a means to construct gender from infancy onwards. Interestingly, when the author tries to liberate the reader, her advice is to engage in genderless behaviour that makes you feel “like a little kid” (p. 77) but I would argue that adopting that mindset does not entail escaping gendered constraints. I remember being a little girl who refused to wear pants, who thought it was impossible for women to have jobs like firefighter, police officer, doctor and principal. Maybe the two are related, maybe not, but the adult version of me cringes at these memories. It’s odd that clothing plays such a strong role in gender construction since Bornstein points out that gender and sexuality get confused, making genitals the qualifier of gender in society. Clothing just covers them up.

I don’t feel personally conflicted by the hierarchical dynamic the author exposes in which two socially privileged monogendered identities are the only options. Where my personal struggle exists is in fitting the bill for the feminine ideal (based on the author’s criteria, not my own arrogance) but also being a feminist. I was surprised that the author encouraged readers to look at visual art as a way of working through gender issues. She takes it to the next level, asking, “Can your gender become a work of art? Can you become your own work of art?” I was bewildered because I can’t seem to reconcile the relationship between my personal and artistic leanings, between my inclination to strive for the feminine ideal while simultaneously critiquing it.

Overall, this book was a delight to read even though I have no aspirations to bend my gender. It was disappointing to learn that my ‘gender aptitude’ or what I think of as gender conformity, was precisely in the middle of the spectrum, under the category ‘gender novice.’ Ouch. As someone who has been reading gender studies theory a lot lately, I had hoped I would do better. But maybe that’s right where I, the fickle feminist, belong. After all, I take liberties with my artistic presentation of gender but not my personal expression of it. I have no desire to live outside the system, but I do wish for a world where there is increased consciousness about gender assignment and reinforcement.

Bornstein, Kate. My Gender Workbook: How to Become a Real Man, a Real Woman, the Real You, or Something Else Entirely. London: Routledge, 1998. Print.