“You don’t have to be very visually literate or media savvy to get that Kirstie Alley’s finger in the ad is only marginally bigger than the average erect penis.”

I started sewing at 6 am yesterday, and then it was a mad dash to pack and return to Canada for an artist talk at my alma mater, Sheridan College. On the Metro North train en route to Penn Station, I wondered if I was hallucinating the poster of Kirstie Alley, her head about five times the size of my own. I had been sewing images of cupcakes ad nauseam for the past two weeks; was I just imagining the daub of icing on her nose and lips for the poster advertising her show, Big Life? (To view the image, see http://www.aetv.com/news/images/news_generic_kirstie-alleys-big-life.jpg)

The dominant text on the poster reads, “Life. Lick it.” She isn’t licking her lips, and we don’t see the dessert that is the source of the icing, so the implication is that she is licking her finger (instead of or in addition to ‘life’, apparently). You don’t have to be very visually literate or media savvy to get that Kirstie Alley’s finger in the ad is only marginally bigger than the average erect penis. The finger is surrounded by lips that are about as glossy as could be, making them look like female genitalia primed for intercourse. All the poster is missing is male hands pushing down on her head or shoulders in bad form to cast ‘lick it’ as the linguistic imperative. 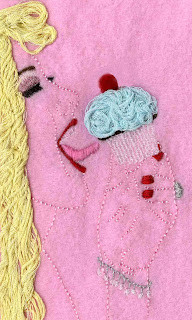 Persistence of sexualized images of women eating dessert? Check. Oh, good—not in the sense that I want women to be portrayed like this, but it makes me glad that the series I’ve been toiling away at (Girls I Went to High School With--double click image on left to enlarge) is in fact relevant. I’ve been having a grand time making these embroideries of women eating cupcakes. I start with images found online and alter them, in part for copyright reasons, but also because there’s something satisfying about making them resemble girls I went to high school with. Had the Internet been the social force that it is today, I’m sure many of my classmates would have happily posed with cupcakes in a similarly outrageous manner.

Conceptually, they are enjoyable, but formally, they are as well. I work with printouts of the images pinned to a felt base. I try not to feel sadistic inserting pins into their faces in voodoo fashion and cutting away their features one by one so I can replicate the contours exactly. I assumed I would be fixated on the sculptural elements—i.e., the areas of upraised thread wound around each other, mostly in the girls’ hair and cupcake icing. It turns out that I’m also enchanted by the contours. I wanted to them to be virtually unreadable, so that all of the attention would be on the girls’ features covered in cosmetics, so I chose a pearly pink that is the same colour as the felt and unreadable from a short distance. I find myself taken by the negative space that is created once I cut out the arm, hand, and cupcake, as the arm reads like the shaft of a penis and the icing like its head. After noticing this effect, I jokingly referred to the embroideries as ‘craft porn’ and said I was cautious about aligning myself with that. My husband asked, ‘Which? Craft or porn?’ It’s a good point—one that I’ll save for another post because I do have to get back to sewing.
Posted by Heather Saunders at 8:56 AM