In defense of the lethargic bride

“…chances are she’s going to be bitter”

It’s a toss-up as to which commuting incident was more alarming today: (1) making my way through a crowd of squealing Justin Bieber fans on a narrow platform in Toronto, ready to fend off potential trampling with my safety whistle…if only it weren’t somewhere deep within my purse OR (2) reading this in a Metro article: “…a girl should start working out as soon as she thinks the guy is about to propose.” I cannot in good conscience deconstruct the group behaviour of the Bieberettes, for I am a former NKOTB fan. (That is to say, as a pre-teen, I walked five kilometers on a regular basis to the general store for New Kids on the Block collectable cards and had my first and only foray into ‘fan fic’). Thus, I will turn my attention to the Metro.

I’m not sure what possessed me to read an article on bridal fitness. It’s probably because after a ten-year hiatus, I’ve started jogging regularly. (I’ve joked that the reason I gave up jogging was that it raised my metabolism so much that I was eating dinner twice a night, which was impractical. The part about two dinners is true but there were other reasons I stopped jogging). Pragmatism cannot be overrated, and I appreciate that brides may want to maintain a specific size because of gown alterations. However, the article didn’t seem to appeal to women’s pragmatic side. Rather it capitalized on their insecurities. A case in point: “…every fat bulge, is meticulously captured on high-def camera.”

Why should a prospective bride feel pressured to become more fit (read: slender) anyway? After all, if her beau—or belle—loves her enough to propose, subsequent changes in physical appearance should be irrelevant. If it’s for others’ impressions, like Facebook friends or wedding guests, may I suggest that the bride reassess her values and how much she loves herself? External validation is not the best kind, as intoxicating as it seems. Also, can we please leave behind the assumption that it is the man who must propose? I know several women who have waited for years to be asked that magical question. If a woman pushes herself because she expects something in return and the man—not being a mind reader—doesn’t deliver, chances are she’s going to be bitter. (Indeed, several months after I made this post, Ana Perez from Chicago threatened her boyfriend that if he didn't propose, she would call 911...which she did, prompting criminal charges. Actually, in this case, working out would probably take the edge off, though therapy would be a useful complement).

I thought society had started to move away from idealizing the female figure, based on buxom models like Doutzen Kroes and Portia De Rossi’s autobiography on anorexia, Unbearable Lightness. However, I changed my stance after purchasing my first bridal magazine for art research. I was stunned that every bride featured, without exception, was waif-like. If this is the type of visual input facing today’s bride, it’s no wonder she feels pressured to shed a few pounds. 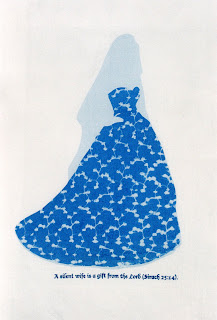 The piece I made wasn’t about body image. It was an investigation of positive and negative space; a juxtaposition of contemporary bridal imagery and ancient religious garb; and a commentary on a verse from the Apocrypha (“A silent wife is a gift from the Lord. Sirach 25:14) used in a reading at our convalidation ceremony. [Click image to enlarge sample for larger piece, aprx. 1 m x 1 m].

To sum up, I was not an aerobic bride, nor am I am a silent wife. I hope that the Bieberettes—those children with ringlets and eye makeup you may have spotted on tonight’s train—grow up to realize that self-assertion and self-acceptance trump vanity.