"Her allure, in my opinion, lay not in the femme fatale reference..."

Well, Judgment Day has not yet ensued as predicted and the dire hour of 6 pm has passed. Even if it happens tonight, I can regale the world with at least one more blog post in this final hour.

My husband and I headed to Toronto the other night to catch Alex Prager’s installation, curated by Bonnie Rubenstein, in the Scotiabank CONTACT Photography Festival. The Week-End series features panels and billboards of women evocative of a by-gone era of cinema. These staged photographs of starlets and femme fatales reportedly celebrate the “trappings of femininity” (1), which—big surprise—caught my attention. Without actually referencing Baudrillard's concept of the simulacrum, the artist's statement mentions the victory of female-generated illusions over reality. Irony is a tricky business, as the image Four Girls (2007, not included in this particular installation) demonstrates: the central figure is shot from below with her back to viewers, tantalizing them in a string bikini top and bottoms wedged to emphasize the contours of her buttocks. Rubenstein isn’t kidding when she writes that it’s difficult to see beyond these facades. It’s no wonder Prager’s voyeuristic style has occasionally been misinterpreted as that of a male artist, undoubtedly reinforced by her gender-neutral name.

The previous CONTACT exhibition I saw was Suzy Lake: Political Poetics, a retrospective curated by Matthew Brower and Carla Garnet at the University of Toronto Art Centre. After seeing her seminal works, notably On Stage, in which she plays dress-up and vamps for the camera, I paused at the entrance of Prager’s installation to consider the novelty of her female figures. The curatorial text notes Prager’s examination of cinematic tropes; after seeing Lake’s performative photos made before Prager was even born, I had a hard time not seeing them as tropes within tropes. Or, as more simply put by one commenter on the MoMA blog in response to Prager's inclusion in the group show, New Photography, 2010: “How is this new photography?” (2) What overcame my misgivings was the simple act of walking through the site and appreciating the photographs in an urban landscape.

When I read that Prager’s installation was at the site of a former drive-in theatre (3), although this was not confirmed by the curatorial text, I grasped the role of nostalgia in appreciating the work. I have maybe one memory of attending a drive-in, so that’s not a source of nostalgia I can tap into personally. In fact, I think my generation takes movies for granted. (This past week, I started watching one movie a day while embroidering and found myself feeling shortchanged because there were no outtakes on the DVD of Gray Matters I rented and that I couldn’t get the extended version of Forgetting Sarah Marshall to play on a rental the day before. Also, I once teased my frightened mother when we watched The Birds--one of the films to which Prager has paid homage--because I was reared on superior special effects...though my reaction might differ now after a recent Hitchcock-style attack from a red-winged blackbird I experienced at the Port Credit harbour). Today, I was reminded of the power of movies while I was waiting for film to be developed at Photo Metro in North Bay. I started reading George Tremblay’s book, Break at Nine! (4), about the author’s career as a projectionist. The opening chapter recounted his receipt of a red ticket at elementary school in 1935 for the first film he ever saw; how his classmate missed out on the perfect seats because he ran down the aisle and slipped; how the author got so excited he stood up on his chair and bonked his head. It wasn’t just the film itself, but the entire experience, that rocked his world. The same is true of installations and it would be unfair to assess Prager’s work as stand-alone photographs when they are part of a curious setting.

The film I had developed contained images of Prager’s work in situ to jog my memory while writing this post. As I pulled out my camera to snap a two-dimensional, glamorous redhead behind a three-dimensional dumpster, a neighbour scowled at me and later, a man on a rooftop patio yelled, “I wouldn’t do that if I were you” (I imagine I have misremembered his proper use of the subjunctive). I wasn’t operating outside Ontario law, so I was perplexed about what was so infuriating. The patio man got his wish because my film ran out before the final image I encountered of a female figure in profile called Barbara (2009). Her blond locks, heavily lined lids and fur coat channeled Marilyn Monroe and Edie Sedgwick. Her allure, in my opinion, lay not in the femme fatale reference, but rather in the combination of high and low contrast, and I'm not referring to darkroom technique. Like the redhead behind the dumpster, her image competed with an urban setting, namely graffiti in the lower right corner. At the same time, its beige-grey colour morphed seamlessly into the fur of her coat, tarnishing her glamour. (These and other images can be seen here).My favourites were the works that functioned like chameleons in the environment, like Lois (2009), the buxom blond amidst broken down cars above vehicles at an actual dealership/autobody shop; and a woman descending a red brick building via a rope, installed, fittingly, on a red brick building (below). 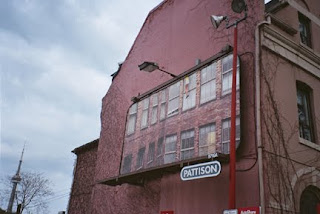 I found myself—to borrow wording from Dermot Wilson’s exhibition that I was glad to catch today at Art on Main in North Bay (5)—embracing the faux. Something he wrote about his own nostalgic works resonated with me when I thought back on Prager’s installation: “We’re immersed in the ersatz. So why not incorporate it into our visions of the landscape?” I suppressed my feminist impulses and decided to give Prager a break in spite of her scant artist statement and her rather pedestrian description of her artistic concept in live interviews, which could otherwise do wonders to defend her visually appealing work. Today, it turns out, is not Judgment Day.