Artists in transit: Riding the rails with Galerie du Nouvel-Ontario

“Art in Motion…involved 30 artists travelling from Sudbury to Chapleau…”

Back in May 2009, I chose the title and concept of my blog on a whim and started the next day without a plan. As an artist-commuter, I wanted to write about my artistic experiences and influences in the context of transit. Over time, it became taxing to tie art and transit together creatively, but I still cherish the moments when they converge and present a potential hook for a new post. For instance, two days ago on the Go train out of Toronto, I was reading the Shout Outs in the t.o.night newspaper when I saw this compliment paid from one Go train passenger to another: “When Botticelli painted, he was dreaming of you.” Ha! 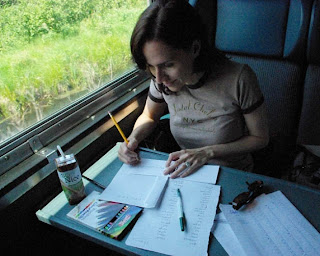 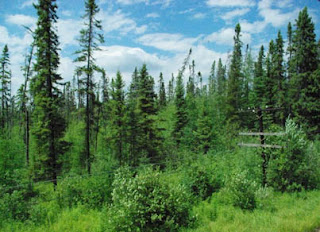 By far, the best pairing of art and transit since I began blogging has been the residency and exhibition I participated in today with members of Galerie du Nouvel-Ontario. The theme was Art in Motion and involved 30 artists traveling from Sudbury (almost 5 hours northwest of where I live) to Chapleau (an additional five hours in the same direction). It's hard to believe it takes 10 hours to get from Mississauga to Mississagi River. I knew we were going into the great beyond when my cell phone lost service, and it sure felt off the grid when we reached our final destination and there was no Tim Hortons in sight. We travelled by Via Rail, making art en route from a Budd car. The scenery was spectacular and the ride was smooth—a relaxing combination conducive to art making, though my concept was actually rooted in tension.

I deviated from my usual practice of feminist fibre art and made a flip book called Les mots que je comprend (The Words that I Understand), based on snippets of French conversations surrounding me. I’ve been interested in the social element of language learning ever since I taught ESL after art school. Recently, I’ve been reflecting on the isolating nature of language—in preparation for a presentation at the International Conference on Image and Imagery at Brock University with the theme, Silence and the Silenced, I’ve been making sculptures with baby clothing containing perplexing statements like ‘Dangerously Cute,’ ‘I Heart Shoes,’ and ‘Gentil gamin, je suis très chic’ that speak for pre-literate girls. Back to the piece at hand, I was interested in the social experience of an Anglophone artist (me) amongst Francophone artists (including my husband), since I’m interested in the concept of the Other in general in my work. I wanted to capture the experience of being in transit and taking in conversations in a foreign language, where my impulse is to fixate on a familiar term until leapfrogging to the next one. The end result is a bit like poetry. I chose the flip book format because of its dependence on motion and its easy fit with the theme. Rather than creating an animated image, I opted for a nonsensical blur with overlapping words in keeping with the anxiety of FSL. I keep thinking if it were an instructional piece by Yoko Ono, it would go something like this: Ride a train in a foreign culture. Write a word you hear on each page of a small book. Watch the words fly. Serendipitously, the word I recorded on the final page of my notebook was ‘encore’; it was the perfect segue to volume 2, which I plan to make on the return trip tomorrow and display at the second Art in Motion exhibition at the train station in Sudbury.

Artists came from as far as Ottawa, Cochrane, and Thunder Bay and explored an impressive range of media: sculpture, works on paper, photography, film, relational performance, storytelling, poetry, and music. At the debut of the works tonight at Aux Trois Moulin Motel where we stayed, I lost at Bingo, got fingerprinted, and was implicated in a murder mystery (the last two were unrelated), but it was still a great day. À demain!
Posted by Heather Saunders at 7:39 PM