I learned about Bill Wrigley’s Little Free Library from the Toronto Star, which I still read in spite of Mayor Rob Ford’s vocal boycott (1). The library is the first of its kind in Toronto, and was even rumoured to be the first in Canada. On December 3rd, it opened to the public on Lee Avenue in The Beach with a ribbon cutting ceremony. When I visited seven days later, my husband and I were the only ones there. Even so, I could picture it becoming the neighbourhood equivalent of a workplace water cooler for generating conversations in warmer weather. The idea is simple: take a book, leave a book. 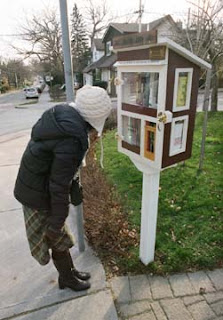 Wrigley’s library sits at the edge of his front yard, within reach of the sidewalk. A quick scan reveals a large birdhouse on the side of his house, making the new addition complementary. These structures, which have been popping up across North America since 2009 in association with the US-based Little Free Library, are modeled on birdhouses. Comparable in size to a medicine cabinet, the Little Free Library in the Beach has a glass door to reveal the contents while protecting the collection from the elements. It sits on a post, meaning little kids would need to be hoisted up, which is probably for the best. You wouldn’t want someone in primary school to grab the copy of The Girl with the Dragon Tattoo that was in the upper of two shelves when I was there. I decided to donate a paperback that would appeal to most ages, Wicked: The Life and Times of the Wicked Witch of the West.

There are a number of things I like about the Little Free Library concept. As security in libraries becomes more sophisticated with RFID technology, starting a Little Free Library is a gracious gesture that assumes the honour system will work. It also makes us rethink the definition of a library, bringing to mind initiatives like the living library, which allows users to ‘check out’ a person and spend time with them. The Little Free Library is similar to the living library in appealing to the emotional side of sharing and community building. Or maybe I was just charmed by its darned cuteness. After all, with its architectural setting, it feels more celebratory than your run-of-the-mill laundromat pile of books that operates on the same principle.

I opened the gold closure gingerly, made my selection, and rearranged the books to prevent pressure on their spines. (Old habits die hard.) Since I like to put a feminist spin on my blog posts, I had hoped to read the chapter on girls in The Dangerous Book for Boys, which was mentioned in the Star article. Alas, it was gone, demonstrating the circulation potential of libraries with 24/7 access. (To give an indication of how much use a Little Free Library might get, one outside a shop in Madison had over 1,000 transactions in ten months).

I ended up going home with a hardcover biography of Christo and Jeanne-Claude by Burt Chernow (St. Martin’s Press, 2000). Christo and Jeanne-Claude (d. 2009) were an artist couple who, like Wrigley, made delightful public interventions, although theirs were anything but little. The introductory chapter was a fitting tie-in to the Little Free Library concept, underscoring the power of books with tales of Christo’s Bulgarian family burning volumes of Russian literature illustrated by avant-garde artists to avoid the wrath of the Nazis, followed by his discovery of modern art through unauthorized books shared discreetly at the Sofia Academy of Fine Arts. As the story of his political asylum unfolded in tandem with Jeanne-Claude’s glamorous upbringing in Casablanca and Paris, leading up to his commissioned portraits of her family, a brief dalliance with her half-sister, and finally, a first kiss between Christo and a then-engaged Jeanne-Claude so powerful it broke a tooth, I was totally engrossed. Great week-end reading…all thanks to the Little Free Library!


(1) For background on this ongoing controversy, see http://www.thestar.com/news/article/1095141--rob-ford-boycotts-the-star-but-we-ll-fight