Although I recently bought my first car, I wasn’t about to drive seven hours by myself from North Bay to Montreal. To get to a book launch and panel discussion at La Centrale Galerie Powerhouse last Friday night, I had to choose between taking a bus at 2 am or taking two six-hour train rides that connected at Toronto’s Union station. That’s when it hit me that I had really moved to northern Ontario. I opted for the train since it meant breaking up the trip with a night of sleep. It also meant that I got to bid farewell to the Northlander in its penultimate week of operation.

I’ve been spoiled traveling with my husband, not just because he loves driving, but because he is bilingual. As I looked unsuccessfully for a map in a Gare Centrale store, I fretted about what I would say if the clerk didn’t speak English. Simple answer: improvise. (“Je desire de chercher pour les directions dans la grande papier [I want to look for directions on large paper]”). The French translation for ‘map’ came to mind an inconvenient five hours later, which was doubly frustrating since I’d had a teleconference with map librarians earlier in the week in which French terminology was discussed. 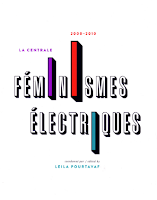 I didn’t fare much better at La Centrale, where I could only catch a string of four French words at a time, and only two of the six panelists spoke in English. So much for having called ahead to ask if all presentations would be in English. Here’s the punchline of my visit: the following evening, I was having dinner at the home of a former La Centrale board member when she pointed out that the book is being launched at Art Metropole. In, ahem, Toronto. Alas, I’m glad I attended the standing-room-only event to show my support. And perhaps this post will bring people to the Art Metropole launch, which happens tonight. Therein lies the power of self-publishing in the Internet age. As Chris Kraus argues in said book, Féminismes Électriques (2012), blogs are the new zines.

At the launch, editor Leila Pourtavaf spoke about the desire to give feminism “renewed life” through the book’s essays, interviews, and artist project (the latter by G. B. Jones). In short, this means enhanced inclusivity, encompassing trans and queer artists as well as artists with diverse ethnic backgrounds. Trish Salah provides a compelling account of the risks inherent in pluralistic feminism, such as treating male artists as special or as non-men of sorts. Interestingly, La Centrale, Canada’s first gallery for women, recently programmed its first show for a man, the late Will Munro. This shift is the outcome of the gallery spending six years reworking its mandate through consultation with members and colleagues. The publication is equally thoughtful.

Why would six years of contemplation be necessary? Consider that, according to Bernadette Houde, ‘lesbian’ remains a radical term. Helena Reckitt suggests that gender is equally (and relatedly) radical, provoking genderqueer art that experiments with gender rather than accepting existing anatomically-derived definitions. If feminism in its initial iteration focused on the needs of traditional women, how can its contemporary counterpart advocate for those labeled as Other?

Féminismes Électriques is a fitting title, because its content reminds us how electrifying feminism is: it is feisty, inspiring, sometimes serious and other times fun. Often, feminist art evokes the familiar, such as Women with Kitchen Appliances, a collective that blends images with audio work created using kitchen appliances. ‘Familiar’ doesn’t mean banal, though, as proven by a video by Palestinian artist Jumana Manna featuring her adult self breastfeeding from her mother. Sometimes feminist art takes the familiar and reworks it to emphasize clichés, like Lesbians on Ecstasy, which does ‘performative sampling’ of lesbian folk music from the Second Wave, to resist the association between women and nature and the disregard for female musicians’ technical skill. Arguably opposite to playing with the familiar is indulging the imagination as Stéphanie Chabot and Dominique Pétrin do, with role-playing involving vampires and cannibals. In an interview with Manon Tounigny, Pétrin emphasized how universal art is but also how open to interpretation it is: in performances involving monsters, she found that children have a literal interpretation, teens are impressed, intellectuals interpret it as subversive, gays think it’s queer, and older people find it exciting. Sometimes a rose is a rose is a Rrose.*

The book concludes with a chapter by Aneessa Hashmi, who writes, “The circulation of knowledge cancels out hierarchy” (p. 191): a fantastic mantra for feminists and librarians alike.

On the occasion of my 100th post, I would like to thank everyone who has read, commented on, or encouraged my writing.

*Apologies for the inside art joke, but I couldn’t resist.

Image: reproduced in 2019 via fair use/dealing. Source: http://www.editions-rm.ca/livres/feminismes-electriques/
Posted by Heather Saunders at 5:19 AM