The College Art Association conference was worth every second of the twenty hours it took me to reach Manhattan by bus and train from North Bay. One of the events I attended was a curatorial tour of the annual CAA Queer Caucus for Art exhibition. Rare & Raw at the Leslie-Lohman Museum of Gay and Lesbian Art in Soho (the first and only dedicated LGBT art museum in the world) features work by Tom of Finland, G.B. Jones, William E. Jones, Will Munro, Kent Monkman, Nina Levitt and Tara Mateik. Once curators Steph Rogerson, Kelly McCray, and I returned to Canada, we chatted about the exhibition.

H - Since you’re both Toronto-based, have you ever co-curated with one another before?

K - Steph and I have been working together on projects since the 2006 XVI International AIDS Conference in Toronto. The initial curatorial project developed for the AIDS conference was called In Tents City. Images from local, national and international artists were projected onto carport tents for a month-long period. We re-mounted this exhibition at the Theatre Centre a year later.

Other projects included the InterAccess Electronic Media Centre in Toronto. It was a film screening called Rare & Raw.  The title of the Leslie Lohman exhibition was derived from this particular event.  We selected queer films from the early 1900’s to the 1970’s that were projected to a Toronto audience both inside the gallery space and to street level audiences through linen-covered windows.

H - Can you comment on your choice of title?

K - Rare & Raw fits perfectly with our intention to feature what we consider to be rare works of iconic artists and ephemera from archives exhibited in an accessible raw state and contextualized alongside or through the eyes of contemporary artists.

S - We wanted a title with a visceral feeling, like something you could taste or touch.

H - Do you think the exhibition functions differently in a museum with a mandate to support LGBTQ artists and issues than it might in a more generic venue?

K - Yes. For example, when the Rare & Raw exhibition ran into New York Art World politics, the Leslie Lohman museum staff supported the exhibition and needs of the curators above and beyond the call of duty.

S - I agree. The specific mandate of LLM allows us as curators to explore LGBTQ themes without fear of censorship or concern about “offensive” content.

H - I read in Art Journal that the Queer Caucus for Art used to be called the Gay and Lesbian Caucus. The earlier version of its name was in keeping with the times if you consider that, say, the first book of its kind was called Gay Art: A Historical Collection. As the field has become more inclusive, encompassing bisexual, trans, and intersex individuals, do you find it challenging as curators to give adequate representation while balancing other (aesthetic, thematic, etc.) concerns?

K - I feel fortunate to be working with Steph in that the two of us are able to agree on a balance of the aesthetic outcome with the necessary representation of varying sectors of communities. We have a strong trust in one another and our varied experiences that allows for a rich outcome. 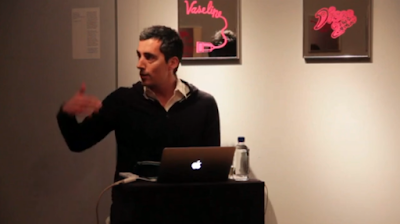 S - Queer communities are continually evolving and part of being queer means being open to change. Inclusivity is part of queer discourse and its politics. There is engaging work being produced by queers around the world – case in point the brilliant Kent Monkman. Kelly and I are a great team and process ideas, images, meaning, and feeling about work with great candour. We are committed to creating exciting intersections dealing with queer representation.

H - Steph mentioned that the exhibition is dedicated to the late Will Munro, “the guy who made nighttime so much fun.” What do you think he would have made of the show?

K - I think Will would have set up one of his music/performance nights where all would be invited to dance beneath the glow of his mirrors.

S - Will would have shit his pants with joy. His work looks beautiful and paired with William E. Jones’s Tearoom, both works speak to each other and create an elevated experience.

H - Were there any difficulties getting the Canadian works across the border?

K - We used a very reliable local shipper who is quite experienced with customs and cross border “situations.” I also ensured that the artwork from Canada was well packaged/wrapped/crated to make it more difficult to take issue with the pieces.

H - Zoe Leonard’s The Fae Richards Photo Archive, 1993-1996 was removed from the exhibition at the request of its owner early on in the exhibition. I’m reminded of the Robert Mapplethorpe court case where only a fraction of the offending photos were discussed, prompting one director to note, “Pictures speak to each other; they become part of a totality” (1). Back to the Leonard series, did you get a sense of viewers’ response to it before it was taken down?

K - Hard to say; the opening was packed, but we did get indications from people later that they felt fortunate to have been able to see the work and were quite appreciative of the curatorial efforts to exhibit elements of the Fae Richards Photo Archive.

S - People were very excited about The Fae Richards Photo Archive. Some had seen it years ago and for others it was new. The Fae Richards Photo Archive was an important component to the show. Its removal is a slap in the face to the other artists in the show, us as curators and LLM, the only institution of its kind in North America. The removal of this piece was based on conflicting demands that the museum and we bent over backwards to appease. The work was removed for reasons of capital and commerce, although that was never directly stated. We were “New York-ed” by powerful art people. What’s so painful about it is that Zoe Leonard has built her career on the back of queer politics as a member of Act Up & Fierce Pussy. I have admired her work for decades. Pulling The Fae Richards Photo Archive out of a queer show, in a queer venue, curated by politicized and passionate queers makes me angry, but even deeper than that is a profound sadness. Zoe Leonard broke my heart.

H - Archives are referenced a lot these days in art. This was true of the panel discussion at Leslie + Lohman that followed your tour, where Nina Levitt spoke about responding intuitively to archival images and Ken Moffat spoke about desiring the archive. Do you think the archive as an institution or concept has a unique resonance with queer artists?

K - I believe there is a growing awakening that is happening throughout, where many communities are beginning to realize the significance of the past and attempting to reclaim/re-contextualize history for present and future generations.

S - The archive is a valuable topic right now. From exhibitions, such as Lost and Found: Queerying the Archive curated by Jane Rowley and Louise Wolthers, to authors such as Ann Cvetkovich and Heather Love, to massive creative outreach in queer archives, such as The One Institute & Archives in LA, the attention on queer pedagogy, queer memory and feeling is at a fascinating point that has the potential to raise awareness about the past in order to possibly have greater understandings of the future.

S - I hope not! Because we have civil liberties in Canada, it’s easy to forget the rest of the world, gay bashing and abuses of power. Subverting, questioning and challenging the status quo continues to be important, specifically with issues of capital and commerce. Queers have become embedded in the corporate ladder, globalization and the race for economic power in ways that need, even demand, fresh discourse.

K - To clarify, what I am saying is that the “new normal” is beginning to incorporate a queering of the “normal.” The dominant culture is no longer dominant in Western society – even though there is still much pressure to accept that it still is.  It isn’t.


Kelly McCray is founder of BANKonART.net and co-founder of ArtBarrage.com. Steph Rogerson is a PhD candidate in Communication and Culture at Ryerson University.

Posted by Heather Saunders at 7:21 PM