What happens when the lights go out


"I'm always amazed that writing inevitably leads to epiphanies, however small they may seem..."

I took an earlier bus at the end of the work day yesterday so I could hit the mall in search of baby clothing for a series of sculptures. Stuck standing for the second day in a row, I couldn’t write notes, but I did reflect on my day, which was unusually productive art-wise.

There was an electrical shutdown at work, which prompted me to work on things that didn’t require a computer. I was delighted by the headway I made first thing in the morning, without the distraction of the Internet. Specifically, I banged out a proposal for a call for submissions about fibre art.

Through the process of writing about the work, which is about three-quarters done, I managed to clarify for myself why I had made certain choices. I'm always amazed that writing inevitably leads to epiphanies, however small they may seem to other people.

Here is some background about the work: 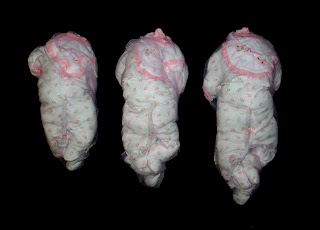 My work positions gender as a social construct. I scour clothing stores for garments that highlight the virtually immediate exposure of baby girls to feminine signifiers (namely sensuous fabric, floral patterns, and the colour pink) and incorporate these ‘found objects’ into stitched assemblages. Most often, these take the form of wall-hung abstracted cocoon sculptures.

Using the cocoon as a metaphor for female socialization, I bind and encase girls’ baby clothing in transparent fabric, allowing the garments to stand in for the human form. Hopeful and hopeless, the cocooned forms simultaneously appear to break free from their fibrous restraints through rips and gouges yet become further bound by layers of stitching while being smothered by additional fabric.

My focus over the past two years has been on cocoons that incorporate baby clothing with printed or embroidered text featuring seemingly innocuous messages like ‘I’m a baby doll’. These cocoons are an exploration of text-based socialization imposed, ironically, on a pre-literate group. In the work in progress, part of the word on the bib is hidden, alluding to gender labeling. The piece may be interpreted as questioning whether the hypothetical child will be assigned the label of ‘prince’ (male) or ‘princess’ (female), and whether the child will resist or conform to this label.

After making what I thought was the final text-based piece, I began the Aberration series, which consists of multiple, mostly identical cocoons representing a single cocoon at various points in time. Conceptually, they celebrate the impulse to delight in the growth of newborns and nature alike, but they also highlight the dark side of conformity through malformations that threaten the pink bundles of perfection. From a formalist standpoint, the Aberration series is an exercise in sculptural reproduction and ultimately a defense of fibre as a valid sculptural medium.

At any rate, the realizations I had were these: I had found the same baby outfit in a preemie size, so I decided to add a fourth cocoon to the far left. (I just started a preemie series, the first of which will be in the National Small Works Exhibition in Grosvenor Gallery at the SUNY Cobleskill campus in New York). I concluded that by using a preemie outfit, I was underscoring the vulnerability of baby girls, but also pushing back the timeline of socialization: through this work, I am arguing that gender construction begins even before a baby has been born, through actions like selecting colour swatches for nurseries and accepting gender-specific gifts at baby showers.

I also decided that in this work, the umbilical cord functions symbolically as a link to the previous generation and its conceptions of gender, but that it also refers to a biological lifeline. I felt relieved because Toronto artist Margaux Williamson had recently suggested I read Stephen Pinker to account for the possibility that maybe nature does trump nurture, which could nullify the basis for my work. The umbilical cord may be a very abstract way of accounting for both sides of the nature/nurture debate, but in the world of sexualized fabric cocoons, who is going to argue that abstraction is out of place?
Posted by Heather Saunders at 2:08 PM