“Even in the context of a gallery, the idea of a man paying a woman for services in bed disturbs me...”

As I was walking briskly along Park Avenue towards Grand Central Terminal last night, a man sitting on a set of stairs called out to me. It wasn’t so much his initial comment that was infuriating (“Shake it when you walk, sexy bitch”). What made my blood boil was his triumphant-sounding “That a girl!” that followed a few seconds later. His implication that I altered my walk to please him and perform for him not only cast me as being complicit, but it defined our exchange incorrectly as mutual flirtation rather than harassment. Also, by calling me ‘girl’ and by using an expression of encouragement typically reserved for children, he went from sounding crass to perverted. If I needed justification for combining lingerie and girls’ baby clothing in my artwork, all I would need to do is remind myself of catcalls like this.

Once I boarded my train, I tried to keep my mind off the incident by reading an exhibition brochure. Earlier in the day, I had taken a docent-led tour of The Generational: Younger than Jesus, which closes in a week at the New Museum. Curated by Lauren Cornell, Massimiliano Gioni, and Laura Hoptman, it showcases the works of 50 artists born in 1976 or later. That would make them 33 years old at most, which is the age that Jesus is believed to have been crucified. Since I was born in 1976 (and I have the button from the gift shop to 'prove' it), I was keen to see the first museum exhibition dedicated to my generation. I was planning to write about the exhibition in general, but because of my current mindset, I’m going to focus instead on two works by male artists from China about the consumption of females. 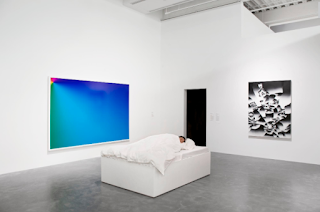 Chu Yun’s contribution to the exhibition is an installation of a woman sleeping under white bedding on top of a museum-like white pedestal. A rotation of women between the ages of 18 and 40 have taken on shifts during the gallery’s hours of operation for ten dollars an hour. They were found by posting an ad on Craig’s List, which serves as a reminder that the transaction for virtually anything can be negotiated online these days, even a woman’s virginity. As Katy Hall points out in a review in The Columbia Journalist (‘Sleeping Beauties in the New Museum’, May 4, 2009), there are art historical precedents for using sleep as performance, such as Andy Warhol filming his lover sleep; Yoko Ono and John Lennon holding Bed-Ins; and the Guggenheim inviting visitors to sleep overnight in The Revolving Hotel Room. What sets Chu Yun’s work apart, in my opinion, is that money is exchanging hands. Even in the context of a gallery, the idea of a man paying a woman for services in bed disturbs me, especially because I noticed a difference in my reaction to the piece when I looked at the sleeper up close compared to when I looked from afar at two burly men leaning over top with a security guard lurking nearby. However, what interests me more is that Chu Yun acts as both artist and patron—the art cannot exist without the participants whom Chu Yun is paying. Also, the fact that there is a rotation of women, rather than just one woman, suggests an eerie interchangeability of identity, which segues to the next work I want to describe.

Liu Chuang likewise acts as an artist/patron hybrid when putting female identity on display in Buying Everything on You. He visited three cities in China and convinced one woman in each to sell literally everything she had on her for five hundred dollars. Along with photo identification, the women sold everything down to toiletries and undergarments. Because of our culture’s fixation on privacy, I couldn’t help but wonder if the women were informed about the artist’s intention to exhibit their belongings. If the display were consensual, it would encourage a different interpretation of the piece entirely. Although the belongings, which are carefully arranged on white plinths, can be seen as merely objects used to construct an identity rather than the identity itself, I can’t avoid seeing the clothing as stand-ins for the body. Each woman gets her own plinth, which keeps the identities intact, but the fact that the same price was apparently offered to each of the women suggests interchangeability: no woman’s possessions are worth more than the others’, just as no woman’s slumber is worth more than the others’ in Chu Yun’s work.

Art is a relatively safe haven for talking about female identity and the consumption of the female body, compared to ‘real life’ where identities are stolen outright and bodies consumed in various ways against will. This is not to say that the boundaries between this safe haven and the real world don’t blur in art: take Yoko Ono, for instance. Her film Rape, made in collaboration with John Lennon, involved a cameraman following a woman from a London cemetery and into her apartment until she essentially broke down in despair. In this case, the subject’s sister was complicit, by providing a key to the apartment in advance, while the subject, Eva Majlata, was the unwitting performer. When I saw it in last year’s Street Art Street Life: From the 1950s to Now at the Bronx Museum—where it was jarringly displayed on four separate monitors, each showing a different point in the film—my reaction was disbelief that a woman could put another woman in this situation. Looking back now however, I must concede that Yoko Ono has made herself (comparably?) vulnerable in the distant and recent past with Cut Piece. In this performance, audience members were invited to cut off portions of her clothing until she was left virtually naked on stage. Such breadth definitely substantiates her receipt of a Golden Lion award for lifetime achievement at the Venice Biennale yesterday.

The younger-than-Jesus generation produces interesting work indeed, but let’s not forgot about the lifetime achievements that span more than 33 years.