"...the memories of mural production are equally important to preserve [as the murals themselves], based on the authors’ riveting stories." 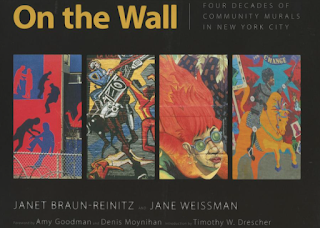 I knew Bluestockings was my kind of place when I walked into the volunteer-run radical bookstore in Manhattan's Lower East Side last night and (a) heard Disintegration by The Cure and (b) saw a child’s t-shirt for sale that featured a pair of eyeglasses and the words ‘future librarian’ next to the classic ‘this is what a feminist looks like’ t-shirt.

Muralists Janet Braun-Reinitz and Jane Weissman were there to discuss their book, On The Wall: Four Decades of Community Murals in New York City (University Press of Mississippi, 2009) with Amy Goodman from Democracy Now! I ordered the book for our library, so I was excited to have this opportunity, and to have a seat since it was standing-room-only, or perching-room-only to be exact.

Although the mural movement began in Chicago, Janet and Jane stressed the importance of New York for the decades-old art form. For one thing, the first mural slated for preservation through the Rescue Public Murals program is Eva Crockcroft’s Homage to Seurat: La Grande Jatte (1986) in Harlem (later this summer, it will be coated in primer and painted on top with the same colour palette). New York also hosted the first conference about murals in 1976, and one of its attendees was even in the audience at Bluestockings.

In writing the book over the past six years, the authors were determined to honour the murals themselves and beyond that, to capture the memories of murals that have already been irreparably damaged or bulldozed. It seems that the memories of mural production are equally important to preserve, based on the authors’ riveting stories. Two that spring to mind are Jane describing Bronx spray artist Lady Pink helping in the rain to seal a mural coordinated by the authors long after she had completed her own portion, and Janet recounting the risks and rewards of commemorating a murdered Pensacola abortion doctor and escort in a mural (a poignant story in light of the recent murder of Wichita’s Dr. George Tillman).

Jane points out that mural artists tend to be as much activists as they are artists, which the latter example demonstrates. It strikes me that muralists’ activism is enhanced by the performative and participatory (read: public) elements of mural production. Murals are borne out of communities, which is why Janet says “the real fun begins” once the murals are constructed in front of members of the community, eliciting feedback that often shapes the final product. This is where murals interest me as an art librarian: they exemplify a vague but oft-discussed concept, that of visual literacy. Everything from historical figures to symbols (down to colour choices) must be carefully selected with the visual vocabulary of the community in mind. For example, if Seurat’s pointillist style were unfamiliar to the general public, its appropriation in Crockcroft’s mural would be pointless…no pun intended.

Entering the Delancey subway station after the discussion, I looked at the wall mosaics inside with fresh eyes. As two-dimensional public art that is intended to be permanent, it must have an equally interesting story behind it as the ones told by Jane and Janet about New York’s murals.

Book cover reproduced in 2020 via fair use/dealing. Source: https://www.upress.state.ms.us/Books/O/On-the-Wall
Posted by Heather Saunders at 6:03 AM