“...the implication of Nair down there has made a comeback in contemporary portraiture...” 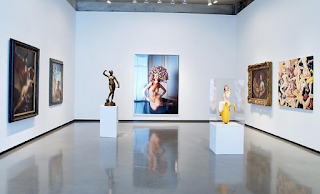 Naked!, the group exhibition that opened last night at Paul Kasmin Gallery in Chelsea, seems to have been curated by Adrian Dannatt to get a rise out of people. It’s all there in the phallic exclamation point.

The press release’s wording, “Women like to look at themselves, and they like to be looked at; they like to be looked at looking at themselves” invites a Bergerian analysis. By that I am referring to chapter 3 of John Berger’s Ways of Seeing (The Viking Press, 1972). In saying “...the classical nude often pretends to itself that it is not just plain naked,” the press release challenges the distinction between ‘naked’ and ‘nude’ as established by Berger. Feel free to disagree with my paraphrasing of Berger: to be naked is akin to visiting the gynecologist or getting dressed in the morning—it’s a lack of clothing for pragmatic reasons or in situations where there isn't a gendered power struggle; to be nude, on the other hand, involves objectification, either imposed or self-imposed, and it is associated with women. If the works in the exhibition are indeed naked(!) and not nude, it follows that idealism should be absent.

The exhibition purports to celebrate the physical beauty of “attractive naked females.” Here’s the bad news: beauty appears to be equated with slender, predominantly Caucasian women who have not yet experienced the onset of grey hair. On the topic of hair, which Berger noted is a symbol of sexual power, you won’t see a lot of it. The inclusion of historical portraits dating back to the Seventeenth Century—which is a curious curatorial choice—serves as a reminder that women were idealized in visual art, sans pubic hair, until the advent of photography, with ripple effects felt in paintings like Gustave Courbet’s L’Origine du Monde from 1866. Interestingly, the implication of Nair down there has made a comeback in contemporary portraiture, as seen in Naked! with works like David LaChapelle’s Nature’s Naked Loveliness, Moscow (2003) and Mark Ryden’s Sophia’s Bubbles (2008), and to a lesser extent in Mel Ramos’ Rita Ritz (2008). My question is, can the show really be considered post-sexist, as suggested by the press release, when idealism abounds? At least there are representations of homosexuality, portraits of women by women, and portraits of men by men included for good measure. As to the latter, I’m not sure that the press release’s mention of “male flesh...sully[ing] the haremic purity of this exhibition” puts me at ease though, if only because of the choice of words.

I think Dannatt’s writing in general is intelligent and mindful of gender issues, so I fear I may have missed the punch line of the exhibition, that its irony eluded me. Perhaps I was distracted by surveying myself instead of surveying the artwork? At any rate, it got me thinking about the possibility of nakedness and nudity converging in the studio. Last week-end, I paired a baby dress of mine with a garter in a cocoon sculpture to emphasize the uncanny and disturbing similarity of their pink floral embroidery. At first I was thinking that the dress relates to nakedness, since self-consciousness is a non-issue for babies, but that the garter connotes nudity. Then I realized that the baby dress involves objectification, in the sense that we take pleasure from dressing baby girls a certain way, which means that the dress could be about nudity as well. Even though I don't work in the realm of the figurative, the same issues are still very much present, and not necessarily any easier to tackle. Maybe the distinction between naked and nude can only be unclear.