Empowerment in the Empire State


“…[Marcia Tucker] enforced affirmative action hiring policies, fought for equal pay for equal work, gave herself permission to be emotional in the workplace when it was warranted, and didn’t let the obligation to run a meeting interrupt her breastfeeding schedule.” 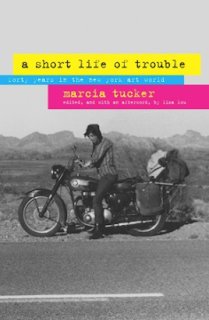 I’m new to New York and still getting a sense of who’s who, so I didn’t realize that Marcia Tucker was no longer alive when I began reading her heartwarming autobiography, A Short Life of Trouble: Forty Years in the New York Art World (University of California Press, 2008). I was standing on the platform of the White Plains train station when I turned the page to her epilogue and saw that it was written by someone else (that someone else is artist Liza Lou, who worked tirelessly to complete the book after Marcia’s death).

It felt like I had been sucker punched. A wave of nausea followed and persisted for at least half an hour. Surely it must have been a case of my body remembering the insatiable grip of cancer, of having my father—who, like Marcia, was afflicted by lymphoma—whisked away to the afterlife as fast as the express train that was hurtling through the station just then, leaving me reeling. The hardened part of my personality insists that this was the reason for my visceral response to the autobiography. I mean, it’s not possible to become that attached to a person you don’t know in 208 pages is it?

Language has transformative powers though, and learning about Marcia’s resilience in the New York art world was encouraging to me personally. Reading about her transition from a poverty-stricken, fearless young woman living in a cockroach-infested apartment to the founder and gallery director of the New Museum gave me hope that moving here was the right thing to do. It’s the kind of reassurance I’ve needed since I got trapped in my broken apartment elevator the first week I was in New York and had to call 911, causing me to fear it was somehow symbolic, that I was fated to be an artist in transit to nowhere, literally and figuratively. It’s the kind of reassurance I would normally seek from my father but can’t.

Enough about me. I want to devote some space to Marcia Tucker's feminism and related contributions to the art world. A Short Life of Trouble: Forty Years in the New York Art World follows this incredible woman from 1945 to 2004. It is a candid account of how personal life and professional life can be bound by a keen interest in and great respect for, contemporary art. She brushed elbows with artist celebrities and made celebrities out of other artists. However, her greatest pride seemed to be in contributing to feminism from the then unusual position of female curator (first at the Whitney Museum of American Art and later at the New Museum).

A self-described “die-hard feminist” (p. 110), Marcia channeled her dissatisfaction with the treatment of women artists and her own treatment as a female professional (she was objectified by select individuals inside the institution on top of being seen as the enemy from some women outside the institution). She organized solo exhibitions for women artists and fought against the 'art apartheid' that has traditionally segregated ethnic minorities from the rest of the art world. As an administrator, she enforced affirmative action hiring policies, fought for equal pay for equal work, gave herself permission to be emotional in the workplace when it was warranted, and didn’t let the obligation to run a meeting interrupt her breastfeeding schedule.

Her feminism extended beyond the workplace, although it was all related: in 1968, she helped develop Redstockings, a consciousness-raising group that still exists today, and two years later, she participated in the first Women’s March down Fifth Avenue. She was a risk-taker who really put herself out there. Her boldness came through not just in daring exhibitions but also in her ‘extracurricular activities’; she started an a cappella group of untrained singers called the Art Mob, and she embraced stand-up comedy classes which culminated in her quirky persona, the art-centric Miss Mannerist. Her tendency towards openness led her to unexpected and enriching relationships, from a husband seventeen years her junior to friends twice her age. All of these tales are delightful to read, but summarizing them doesn’t do them justice, so please check out the book yourself. You’ll find it on our new book shelf at the library, as soon as I return it, that is. Book cover added in 2020 via fair use/dealing. Source: https://www.ucpress.edu/book/9780520265950/a-short-life-of-trouble
Posted by Heather Saunders at 12:52 PM