“When used to tell the truth,” she [Beverly Naidus] told the audience, “[beauty] can be really powerful.” 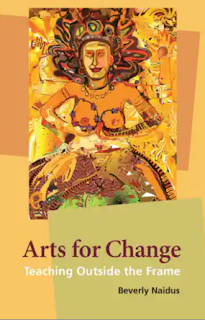 I missed my train at Grand Central Terminal by seven minutes last night, but it was worth it to stick around after a Bluestockings book reading. In that critical seven minutes, I got to meet the featured author, Beverly Naidus, and pick up her book, Arts for Change: Teaching Outside the Frame (New Village Press, 2009). Although I went to get ideas for an eco-art course that I’m developing in collaboration at Purchase Collegewith an environmental studies instructor, I found her talk to be very helpful for contextualizing my own artwork and for mitigating some of my insecurities as an artist.

Naidus made and defended feminist art in its early days, so I value her opinion. While listening to her presentation, I realized something about the creative process: inclinations can become convictions in the moment that someone you respect not only echoes your sentiments but manages to articulate them in a way that you cannot because you’re too close to the issue. It’s validating, and I don’t mean that in an egotistical way. For me, there were two things that Beverly said that resonated with me.

Early in her presentation, she defended the role of beauty in contemporary art. “When used to tell the truth,” she told the audience, “[beauty] can be really powerful.” Sometimes I wonder if I should make my work grotesque (picture Cindy Sherman’s use of vomit or Jana Sterbak’s raw meat), but it’s just not my style. Frankly, I like the idea of seducing the viewer with silky fabric in pretty shades of pink because it’s a reminder of the power inherent in feminine signifiers. I too am seduced by them in spite of myself, and that tension drives the work. Hopefully, by drawing viewers in with beauty, I can capture their attention long enough to get them to contemplate the underlying message, which is that girls are socialized through clothing that reinforces seemingly innocuous stereotypes that are potentially damaging from a feminist perspective.

The other thing that clicked with me was Naidus’ use of the term ‘socially engaged art’ rather than ‘activism’ because it is more inclusive. Her definition of “art that intends to provoke social change” made me really happy. (I feel that I should write something more profound and scholarly but that is the truth—it made me happy). I once knew someone who delighted in his ‘quiet rebellions’, bucking convention by doing things like wearing mismatched socks. I’ve always felt my work was more of a quiet rebellion than activism. It is not community-based, nor does it feed into a cause that would provoke a formal protest, and it is unlikely to get me arrested like some of the actions my artist friends have undertaken. Naidus’ use of the term ‘socially engaged art’ made me feel like there is a legitimate niche for me in the art world.
Posted by Heather Saunders at 12:52 PM