Putting the femme in femmage


“Although I wondered about the ironic risk of essentializing feminist artists by singling them out in an exhibition, I tried to let my mind relax and think about what these artists could teach me.”

I should probably take the subway more often instead of being frugal. Walking from Grand Central Terminal to Chelsea last night proved to be doubly frustrating. First of all, I was stopped multiple times by a Democrat wanting to know if I was a registered voter, meaning that I had to endure the quizzical-bordering-on-annoyed expression I receive when I say, “I’m not American.” It gave me a strong urge to read Edward Said. Second of all, I got stuck in a downpour, so I had to squeeze out the bottom six inches of my trousers before entering Pavel Zoubok Gallery, which made me feel anything but glamorous. The effect of gravity on wet fabric in combination with flats made for a tripping hazard, and I found myself wondering if the Manhattanites in high heels were onto something good. (Note to self: stop being smug about sensible footwear).

The exhibition that opened last night, Daughters of the Revolution: Women & Collage, showcases the works of over 30 fantastic modern and contemporary artists. I decided to go because I had written a paper on Hannah Wilke’s collages, which are severely underrepresented in scholarship. The paper was for a course on collage taught by David Moos, the curator of contemporary art at the Art Gallery of Ontario. It was the most intense class I had in my art history masters. A small group of us sat in a windowless room one afternoon a week to debate the importance of ‘the cut’ and other collage-specific phenomena, and confided in each other about feeling invigorated but mentally drained afterwards.

I was curious to see Wilke’s work in relation to collages by other feminists because it represents the opposite approach to what I argued. Unfortunately, I couldn’t really get a sense of the context because of the crowds at Pavel Zoubok. However, I can say that the first image to confront me was a checkerboard pattern of breasts, so seeing Wilke’s work a few seconds later naturally made her collaged forms seem corporeal even though she herself resisted a singular interpretation. Allow me to explain how my approach was opposite: in my essay, I suggested that the best way to insert Wilke posthumously into the lineage of collage—read: the old boy’s club—was to put her on equal footing with her male counterparts. Specifically, I called for a formal analysis over a feminist analysis (the latter is typically applied to her work). This was a difficult decision for me because there is nothing I would have loved more than to focus on the feminist nature of her work.

A formal analysis reveals Wilke’s contributions to the medium of collage, namely: her conceptually significant introduction of gum and erasers to the roster of collage artists’ media (her work in Daughters of the Revolution—Köbenhavn [1975]—features multiple eraser forms, a fascinating choice of material for an additive process); her blending of collage and assemblage through the addition of tiny sculptural forms on two-dimensional backgrounds; her playful enhancement of perspective through subtle changes in the scale of collaged forms; and her provocative merging of collage with performance. These developments warrant the attention of art historians, and not exclusively feminist art historians, for they represent a unique departure from collage while remaining firmly committed to its principles. 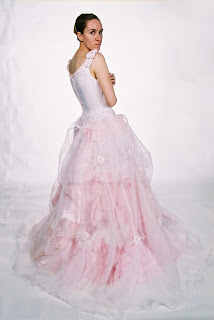 Although I wondered about the risk of essentializing feminist artists by singling them out in an exhibition, I tried to let my mind relax and think about what these artists could teach me. Here’s what I learned: ever since Toronto artist Vladimir Spicanovic asked the participants in our seminar if any of us worked in collage, I have felt like a fool for piping up about the assemblage of 30 dresses I was in the middle of making (see image above and below; double click to enlarge). I questioned the validity of the labels ‘collage’ and ‘assemblage’ because the dress was neat and tidy, devoid of the violence that is associated with ‘the cut’.

However, last night, seeing Donna Sharrett’s symmetrical and carefully rendered work made me feel less foolish and as I write this, I realize that Wilke’s placement of forms in her postcard collages was equally deliberate and also considered collage. Additionally, discovering Ann Shostrum’s wonderful piece, Strawberries (2009), with its jagged edge and hand stitching, made me feel justified referring to my cocoon sculptures as assemblages in my artist statement—even though a member of the art world has already done so. If only we could live in a world without labels.

After the downpour came to a halt, I made my way back to Grand Central Terminal and picked up some gelato. The cashier said with a warm smile, “Enjoy your 4th of July.” Thank-you, I will enjoy my 4th of July, even though I am not American, even though I am not a daughter of the revolution. I’m thrilled to be here, to be living in a city where I couldn’t catch all the gallery shows if I tried. Funny, I no longer feel the need to read Edward Said.

Click here to view images from the exhibition.
Posted by Heather Saunders at 9:38 AM