“So many cakes. So many girls.”—Dustin Wayne Harris

Cupcake magnate Magnolia Bakery recently opened up shop in Grand Central Terminal, the news of which excited me so much I actually clapped my hands and squealed. My roommate and I enjoyed a piece of cake there today, setting the tone for the exhibition I headed to afterwards in the Lower East Side of Manhattan. Cake Mixx by Dustin Wayne Harris at Heist Gallery, which closes this week, features nine close-up colour photographs of cakes and one sculpture.

I take issue with work that depends on expository text. I appreciate the supplemental role that text can play, but I feel that if a viewer cannot ‘get it’ without text in the form of a press release or artist statement, the work might be better presented in the form of a book so that the two are integrated. Cake Mixx is an example.

The cakes were made upon request and without direction by women Harris has dated. They run the gamut, with no two looking alike. According to him, they are reflections of their makers, a notion that makes me nostalgic for the television show Just Like Mom in which parents had to guess which culinary creation their child made after a disgusting taste test. Although Harris sees the photographs as psychological portraits, without the back-story of his approach, they simply read as cakes. The artist says, “Cakes tell it all” but I would argue that it is the press release that tells it all. Furthermore, the viewer is not privy to the details of the makers’ personalities or the nuances of each relationship (as in, say, Sophie Calle’s work) so it becomes an inside joke for the artist and the female participants. Even with the ‘portraits’ being named for the women who made them, it doesn’t function in a biographical way or more broadly in an anthropological way, nor does it function as mere entertainment. The press release says, “The viewer’s head is whizzing” but without the inside story, viewer engagement seems impeded. Unlike the artist—who had the opportunity for continued or revived romance with the bakers and a vested interest in the symbolism of cake decoration as an indicator of relationship potential—the viewer has nothing at stake, no motivation to probe deeply.

The press release encourages extrapolated meaning: “Is Saran Wrap code for safe sex or daddy issues? Because the frosting is messy, she’s probably wild in bed”. Really? Let me say that again. Really?! I can relate to the impulse to cast baked goods in a sexy light, having recently finished fabric cupcake sculptures with lingerie ‘icing’ (see image below) but ultimately, I fail to see these photographs as sexy...and I’ve read Erin Bolger’s The Happy Baker, which is geared to single women wanting to send messages to their lovers or would-be lovers. At most, I can see the heart-shaped cakes as gendered because they seem like too sappy of a choice for men. 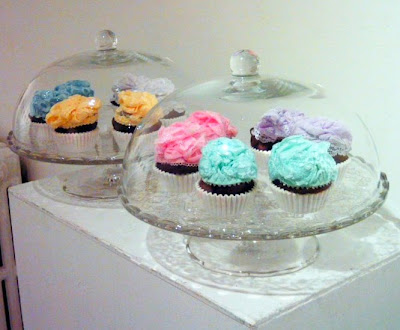 The press release verges on melodramatic by stating, “The cakes cease to be merely relics invested with all the intense beauty and suffering of memory and longing, and instead become infused with a heightened sense of uniqueness, of introspection and of self.” This contrasts the artist’s flippant attitude: “So many cakes. So many girls.” His comment strikes me as the verbal equivalent of making notches on a bedpost. What introspection might occur is interrupted by the perplexing sculpture, Glitter Butt. I actually asked, “Is this by the same artist?” What to make of the disco-ball-like buttocks of a man with a very prominent anus? Is the message that all the concoctions come out the other end looking pretty much the same?

p.s. After writing this post, I found Perry Sanatanachote’s “Baked With(out) Love” (DNAInfo, April 2,2010), which states, “Harris admits he liked the idea of forcing domesticity and femininity on these women who weren't any good at traditional female roles.” As you can well imagine, this comment made me want to toss my cookies—er, cake.
Posted by Heather Saunders at 9:16 PM