“For any cynic who has survived art school or served on a gallery programming committee, 'Trite Tropes' is a ‘must read’.” 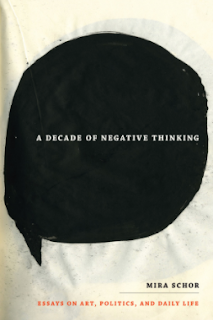 Even though it would mean being exhausted on my birthday, I booked the overnight bus last week so I could attend an artist talk by Lynda Benglis before heading home to Canada. I’m embarrassed to admit that when I learned her talk at the New York Studio School had been cancelled, I did not act my age: I sulked for the better part of the day. And what does a librarian do to cheer herself up? She goes book shopping, naturally. I chose Mira Schor’s A Decade of Negative Thinking (2009, Duke University Press) because I felt the dark title would be a good match for my mood.

My own negative thinking was quickly abated. The only criticism I can make is that Schor’s writing is so luscious that I wanted to relish and reread each sentence before moving on, which slowed the entire experience. Her series of essays on contemporary art is so compelling that I forgot all about the overwhelming stench of urine as I began reading in the bus lineup outside Penn Station. Since Schor is a native New Yorker, I trust that she’ll perceive that as the highest form of compliment should she ever read this post.

It’s much easier to write a post about a book that makes me want to bang my head against the wall than a book that makes me want to nod my head, and Schor’s falls into the latter category. Unfortunately, head nodding contributes little to academic discourse, unless it’s to emphasize the continued relevance of a classic. Nonetheless, it’s worth mentioning that Schor’s observations and opinions rang true for me repeatedly. The book begins with ‘She Said, She Said: Feminist Debates, 1971-2009.’ When reading the first essay from this section, ‘The ism that dare not speak its name’ in which Schor identifies a troubling trend of women artists not associating themselves overtly with feminism, I found myself thinking, “Yes! Elizabeth Sackler spoke about that very problem at Invisibility to Visibility: Are the Major Museums Opening Up to Women Artists?” (Brooklyn Museum, March 27, 2010). In the same essay, Schor writes about the importance of the feminist perspective to media literacy and includes excerpts from disturbing news stories as proof. The following morning, I read the free Metro newspaper on the Go Train to stay awake after losing a night’s sleep. Rather than falling mercy to fatigued head bobbing, I engaged in deliberate head nodding with Schor in mind as I read two shocking stories: one about a seven-year-old New Jersey girl whose step-sister allegedly facilitated sexual abuse of the child by multiple men in exchange for cash (no author, Associated Press); and the other about a convicted 27-year-old rapist from Ontario who said one of his victims should now “know to keep her doors locked” (Mattos). These are just two examples that I found myself heartily agreeing with Schor about.

The middle section is on painting. As a non-painter, I’m going to take the liberty of skipping over it in my discussion even though I did enjoy reading it. The final section, ‘Trite Tropes,‘ prompted me to vacillate between head nodding and defensive head shaking. For any cynic who has survived art school or served on a gallery programming committee, ‘Trite Tropes‘ is a ‘must read.‘ Schor considers what makes art predictable. I was laughing along as she rhymed off clichéd elements to which contemporary art is prone: “On one jury in which I participated, we decided that a moratorium should be declared on family photos, cartoons, waifs…” (221). Then, as if a slide of my work had been inserted into the carousel, “underwear, childhood, dresses…” Hmm, it would seem that using dresses and underwear (or ‘intimate apparel’ as I delicately referred to it in a recent grant report) to critique childhood socialization puts me in dangerous territory. I’m too invested to change now, though.

In this same section, in a priceless essay called ‘Recipe art,’ Schor facetiously establishes a formula for art world success, which basically involves combining tropes to create one-liners. Although my artistic preferences lean toward the cerebral (but not at the expense of accessibility), I was reminded of the value in one-liners from a current call for submissions for a wearable art competition taking place next month. The instructions underscore the importance of being able to ‘read’ the work from at least six feet away. If accepted, I’ll probably have between 30 seconds and a minute on the runway, so modelling a one-liner is arguably the only viable option. I’m keeping my fingers crossed for Sugar & Spice, my cupcake bra, or a variation of it. That brings me to another element of Schor's book that provoked me.

Schor subscribes to the tenet that women are still seen primarily as sexual commodities in spite of major advances. Reading this, I nodded my head once again, acknowledging its regrettable relevance even to a seven year old. Reflecting on my own work, I immediately thought of the cupcake bra and the title of my recent show at Gallery 1313 (Toronto), Titillate. I’m not confident that complicity and self-righteousness (i.e., my belief that I’m creating titillating work for a higher feminist purpose) can co-exist. Someday, someone may call me on it, so in the meantime, I’m trying to sort it out.

Truthfully, I didn’t buy Schor’s book because of the dark title, but rather because of its coverage of feminist art blogs, as I’m preparing a presentation on my blog for the Art Libraries Society of North America conference later this month. As much as her coverage of the 2.0 world is exciting, it’s intimidating for me to respond to it from a 2.0 platform. The reason is that Schor critiques the inconsistencies and confusion about feminism that characterize many art blogs. I fear that mine is shaping up to be a combination of head nodding and head shaking, with a fair bit of knee jerking thrown into the mix. If Schor has focused on a decade of negative thinking in her book, in my blog I have chronicled a year of conflicted thinking. For those of you who know me well, you know I’m not referring exclusively to my art, and I appreciate your support. Thankfully, art offers much needed respite.