The California Gurl & the Canadian Girl


“Am I envious that Perry’s video is all the rage and that the cupcake bra has been called genius…?”

Friends have been writing from as far away as Korea to give me the head’s up about Katy Perry’s California Gurls video, which was released mid-June. The reason? Among the many sweet treat brassieres worn by the singer and her entourage is a cupcake bra that bears a striking similarity to my wearable art piece, Sugar & Spice (to see Perry’s in action, see 2:10+ here and for still photos click here). 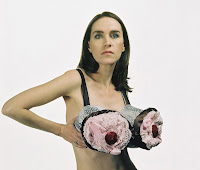 Without friends, I would be oblivious to the video’s existence. I’ll admit to once thinking Snoop Dogg—who is featured in California Gurls—was called Snoopy Doopy Dog until a more culturally informed friend clued me in; I wish I were kidding. I may not know music, but I do know art: after seeing only a few frames of the video set in a candyland, I thought with admiration, “It looks like an animated Will Cotton painting.” Sure enough, he is the artistic director.

I’m relatively up-to-date on the ins and outs of copyright, having co-presented a workshop on the topic two weeks ago. Thus, I am aware that an artist cannot copyright an idea, including something as specific as a cupcake bra. Even if Will Cotton knew my work (a notion I’m only indulging for the sake of argument) or if Katy Perry herself had seen Sugar & Spice, I doubt I could make a reasonable case for copyright infringement. Sure, I could say with a childish tone that I made mine first, and that I have three public presentations to prove it, dating back as far as April 2009. However, I can picture the counterargument unfolding like an absurdist play.

Perry’s representatives could actually argue for transformative use, which is one of the conditions allowing the reuse of content in US copyright law. Whereas my piece has an explicitly feminist intent (see my artist statement alongside the detail photo here), Perry seems to be objectifying women. At least this is the conclusion I come to based on context—in light of her shooting two cans of whipped cream from another bra, and in light of her lounging naked on a cotton candy cloud. We may be polar opposites in this regard, but we’re more alike than it may seem on the surface. In a behind-the-scenes clip of the filming of California Gurls, Perry refers to her breasts as her assets. When I stepped out of the Green Room in a wearable art show last month in Boston, provoking bold and instantaneous responses with my own cupcake bra, I was well aware of the implications of selling sex. 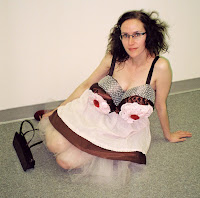 Am I envious that Perry’s video is all the rage and that the cupcake bra has been called genius (Trendhunter Magazine) while my piece, which took a week of non-stop sewing to make, lies on the fringes of art world obscurity? Not really. If anything, it gives me the illusion of having my finger on the pulse of popular culture (which, for my Snoop Dogg-confusing self, is admittedly flattering). No, if there are any sour grapes (or cherries?) it’s harmless envy about Perry’s personal association with Russell Brand and her professional affiliation with Will Cotton. In my opinion, much of the bad feelings related to copyright lie in people’s insecurities about one work being confused for another, which seems to be bound up in identity and ego. Frankly, I don’t think there’s any risk of me being confused with a singer who straddled a microphone onstage the other day. I’m happy to let the focus stay on similarities between Perry’s ejaculating bra and Lady Gaga’s gun holster bra from the Alejandro video.

Besides, at the end of the day, can I really harbour bad feelings for someone who says she ‘lurve[s]’ my homeland?