I shuffled off to Buffalo on Friday to hear an artist talk by Erin Finley that coincided with the opening of her exhibition at Hallwalls. The show consists of “knockout drawings” featuring “coyly transgressive subjects,” to borrow curator John Massier’s wording. He described the act of seeing her work in person during a studio visit as startling, because reproductions couldn’t do them justice. One could imagine that he was referring to the teeny narratives surrounding the main action, which are rendered intricately with a cartographer’s pen. Or maybe he was thinking of the glint of light hitting a sparkly baby Jesus atop Marlon Brando’s head or on a glittering Louis Vuitton sandal in a self-portrait of the artist with maxipad wings exposed. 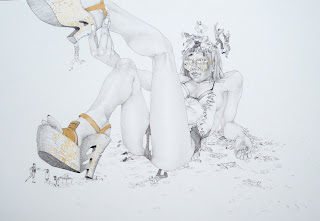 What I recall most vividly from visiting Finley’s Calgary studio and later, her present Toronto studio, was the denseness of imagery cluttering the walls. Early 80s Madonna hung alongside an oversized colouring book picture of Alice in Wonderland and across from a leaflet for the theatre production of Legally Blonde that Finley picked up while exhibiting at CBGBs. It was as if she had gorged on popular culture and hurled onto the wall, where her entire visual schemata was seeping into the works created below. Thus, it was fitting that she began her artist talk with an overview of images that inform her current work, which ranged from Miley Cyrus with her pants around her ankles to documentation of torture in Guantánamo Bay.

The content of her irreverent drawings makes them au courant, yet they possess a timeless quality by virtue of their style. There are several artists that come to mind whose purposeful disregard for drawing conventions makes them easily confused for one another; this aesthetic, however suited to quirky subject matter, runs the risk of a pressing expiration date. Finley’s deftly drawn and equally imaginative works stand in contrast. It doesn’t hurt that she inserts references to art history, like Borromini’s architecture, Mannerist proportions, and Greco-Roman stories, situating her work firmly in the realm of art and preventing it from being confused with children’s book illustrations like the work of some of her artist contemporaries. 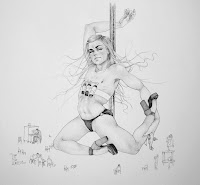 In the context of this blog, I would be remiss to discuss Finley’s work without tackling the prickly issue of feminism, for she is a self-described feminist. At best, feminism is a contentious issue, but it is even more so with her work. A case in point: Rape fantasy (2010) features a scraggly haired girl lying on the ground while reading a short story of the same name by Margaret Atwood. Though her back is arched and her naked bottom is thrust in the air like a cat, she appears absolutely in control. The toe of her running shoe digs into the ground, giving her the ability to sprint away if need be. Her male-like torso, devoid of cleavage, is suggestive of superheroism, conjuring images of Buffy the Vampire Slayer slamming a classmate’s head into the steering wheel when he makes a pass at her after locking the door against her will. There are numerous representations of androgyny in the exhibition, notably in self-portraits, which address the malleability of gender head-on. At first glance, works like Portrait of the artist as a suicide bomber (2010) may seem aggressive and not just because of connotations of terrorism. However, she credits children’s literature as a source for this so-called magical imagery. This perspective casts them in a tender light and reminds us of the endless possibilities that exist in children’s minds before they place limitations on themselves because of gender. And, just as androgyny avoids prescriptive behaviour, so does a portrait of two men kissing, Simon + Jimmy (2007), which she showed in her presentation. Finley noted that the viewer does not watch them perversely. If anyone is the voyeur, it is the birds and the bees in the background, which underscores the naturalness of this encounter. Her inclusiveness of queer sexuality and her prevention of voyeurism are ultimately feminist. 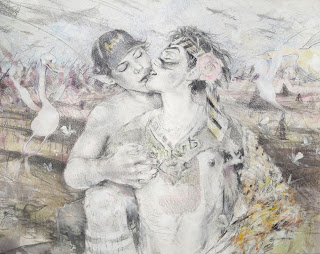 At the end of her talk, I asked what her barometer was for gauging whether her subjects were too lukewarm or too far-gone, expecting a self-conscious answer (like wanting to provoke a reaction from family members but not wanting to hide the work from them). Instead, she had the perfect quotation on the tip of her tongue that fused art history with pop culture: as Andy Warhol told the Velvet Underground, “Always leave them wanting less.”