SlutWalk: A protest outside police headquarters

Today Dan Savage posted a video on Slog called What Guys Think of Modesty. (1) The pious maker, identity313, implores females to—I kid you not—“have your dad screen your wardrobe,” lest they “lead men down to death” by revealing “skin that should not be on display” and acting as “bait.” I’m at a bit of a loss, since my dad is dead. I guess I should defer to my husband? 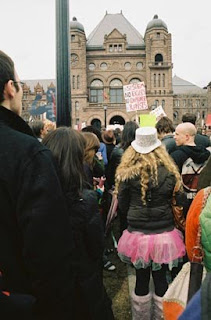 Over 3,000 people gathered at Queen’s Park yesterday for SlutWalk. To the casual (or cynical) observer of women donning corsets, thongs, and fishnet stockings, it might seem like an in-your-face flaunting of the right to sexual pleasure without judgment. Although there were cheers for “hot, consensual sex” (2) and a reclaiming of the pejorative term ‘slut,’ that assessment would overlook the all-important irony of the march, which ended outside the Metro Toronto Police headquarters. 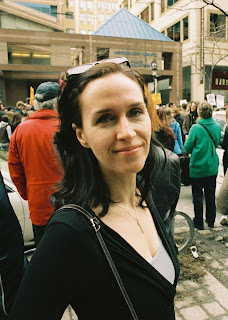 Organized by five women, SlutWalk was a reaction against a Toronto Police Constable advising York University students in January that women “should avoid dressing like sluts in order not to be victimized.” (3) Although the comment was retracted, and reportedly addressed by Metro Toronto Police (4), the incident indicated a need to redress outdated, offensive, and—frankly—dangerous viewpoints. In the first of 70+ SlutWalks, protestors turned this advice on its head by wearing whatever they liked, ‘slutty’ or not. The idea was to put the onus for corrective behaviour on perpetrators and to stress women’s right to agency without being subjected to sexual profiling. As the marchers walked through blocked-off streets, they chanted, “Whatever we wear, wherever we go, yes means yes and no means no.” Or, as one sign summed it up: “Don’t get raped!” edited as ‘Don’t rape!’

I remember the first time I was called a slut because of my clothing. It was on an elementary school trip to Canada’s Wonderland. The stranger’s comment was probably provoked by my bicycle shorts, which I actually thought were extremely practical for a day of getting soaked on rides. I couldn’t have been older than twelve, back when the extent of my involvement with boys was dancing arms’ length apart inside a supervised and well-lit classroom. Slut indeed! I have to admit, there is part of me that feels I won the lottery: I grew up in a country where I was not prevented from going to school because of my gender, nor do I run the risk of being shot at during a peaceful demonstration, as happened recently to Ivory Coast women. Is it really so untenable that every time I am sexually harassed, I evaluate my clothing and whether it played a role? (I know the answer is affirmative, but still…). Another reason I felt uncertain about my place at the protest is because of my position as a feminist artist: I believe that gendered stereotypes matter and that clothing matters, and that the two intersect. I am just as concerned about a baby sleeper that says, “Your crib or mine?” as I am about the padded, push-up triangle bikinis introduced last month by Abercrombie and Fitch for their kids’ line. If I feel clothing is loaded, do I belong at a protest that argues the opposite? (Obviously, there is a difference between how we dress and socialize our children and how we dress ourselves once we’ve already been socialized. I suppose the common ground between my artistic concerns and the protestors’ concerns is in pointing a finger at society and wanting the best for females).

Personal conflict aside, there was every reason for me to attend SlutWalk. For one thing, it’s a high profile event, and I feel that is a better approach than Denim Day, which I blogged about last year. (5) It’s easy not to notice an apparently activist pair of jeans, but it’s impossible to ignore sobering signs like “Dykes don’t need correcting” and “I was wearing a sweater + pants. Was it my fault too?” Others, which quoted Mahatma Ghandi or appropriated the look of John Lennon and Yoko Ono’s famous poster with ‘RAPE CULTURE IS OVER! if you want it’, underscored SlutWalk’s pacifist mandate while rooting it in a trajectory of historically important protest. The signs were easier to take in than the speeches, because random chanting competed for attention, not to mention the men standing on the rooftops of cars holding questionable signs like, “We love sluts.” Organizer Sonya Barnett rallied the crowd by saying, “We need and expect better.” Jane Doe, a survivor who sued Toronto Police in 1986 for negligence, called on Mayor Rob Ford and the MTP to restructure police training and to be accountable to high-risk groups like transgender people, women with disabilities, Aboriginal women, and sex trade workers. And, I can’t remember who made this comment, but as a librarian, I don’t want to leave it out: a female student shouldn’t have to think twice about staying late at the campus library. Agreed.

Scanning the crowd, I was mesmerized by the women whose clothing bordered on art, like the strapless dress made entirely of caution tape. In the realm of performance art, there were a lot of outfits, such as a wedding dress, a retro housewife dress, and parasols toted by goths, which put the ‘demur’ in ‘demure’; that is, they balked at the adjectival meaning of ‘sedate’ in favour of the verb meaning ‘to object.’ Impressively, the crowd didn’t have the Lilith-Fair-like ratio of women to men that I was expecting. I felt a compulsion to hug each of the many men in the crowd (save for the ones on top of the cars) who came out in support of friends, lovers, sisters, and mothers, or just to give a face to the men who don’t confuse a dress for ‘yes’. Alas, I held back, because I wouldn’t want to be called a, you know, slut.

POST SCRIPTUM: Thanks to Statcounter, I’ve learned a lot about my blog. For instance, this is my most popular post to date, which is interesting because it’s less art-focussed than my usual posts. Another thing I’ve discovered is that somewhere out there in cyberspace, people (i.e., not singular) conduct image searches for sluts at Canada’s Wonderland. I feel vindicated, thinking of them arriving here accidentally and getting a dose of feminism.

(1) What Guys Think of Modesty
(2) Jane Doe
(3) www.slutwalktoronto.com
(4) For the perspective of the police, click here
(5) To view that post, please copy this link (for some reason the URL can't be linked): http://artistintransit.blogspot.com/2010/04/redress-through-dress.html
Posted by Heather Saunders at 4:33 PM