Last night, I stopped by White Box in the Lower East Side of New York eight hours into Amy Stoker’s durational performance, X. Somewhat reminiscent of Ai Weiwei’s Remembering (2009), which used 9,000 student backpacks to spell out 'Remembering' in Chinese on Munich's Haus der Kunst to memorialize well beyond 9,000 child deaths in the Sichuan earthquake of 2008, Stoker cut a 600 square foot American flag into the same number of pieces as the projected number of casualties in the US-Iraq War. 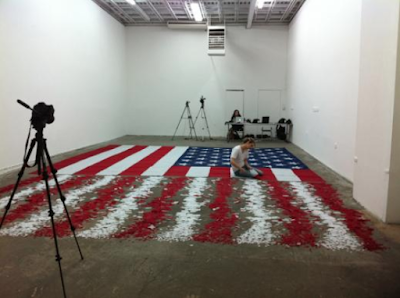 In spite of precision weapons meant to minimize so-called collateral damage (Brewer, 2009), the death total—according to Iraqi Body Count—is currently considered to be over 120,000. Arguably contributing to the Western desensitization to this figure is the media portrayal of Middle Eastern people as “…violent, and fanatically religious” (p. 234, Brewer, 2009). This bias dates back to 1958, when President Eisenhower described the Middle Eastern “campaign of hatred against us, not by the government but by the people” (p. 240, qtd. by Chomsky, 2003). The censorship of media images also weakens the intensity of this number; Americans have been spared “armless children, crushed babies, [and] stunned mothers” (p. 256, Brewer, 2009) that figured prominently in local media. One photojournalist was asked by Time Magazine to stop submitting pictures of wounded civilians. To approach this issue visually, then, is fitting. Also fitting is Stoker’s use of a flag to protest war, considering this pairing emerged during the Civil War and peaked in the Vietnam War (Welch, 2000).

The gallery’s Facebook page billed the event as the dismantling of a flag. It’s a curious description that evokes bombs instead of flags and sidesteps the term ‘flag desecration’ that is used in state and federal law, not to mention the Library of Congress classification system. Was this word choice a strategy to avoid controversy? It would be reasonable, based on what the School of the Art Institute of Chicago experienced in 1989 when Dread Scott placed Old Glory on the floor (like Stoker) in What is the Proper Way to Display a US Flag? Interventions from offended veterans; 7,000 protestors in a single day; and prohibitive municipal legislation ensued. Stoker’s undertaking could be considered equally risky. One viewer wrote in the guest book, “…what if the popo shows up? oy.” Public understanding of the repurcussions is murky at best**, in part because of shifting laws and inconsistent rulings in court. When Vice President Joe Biden was a Senator, he noted that a jury would treat differently a veteran who placed a flag on the ground in front of a monument that an obscure artist like Dread Scott (Welch, 2000).

In the US, dissidents have been beaten, jailed, and executed for flag desecration. Still, it’s an issue artists have embraced. High profile artists like the now deceased couple, Nancy Spero and Leon Golub, have supported flag desecrators. Memorable works have been exhibited, like Kate Millet’s The American Dream Goes to Pot (1996) in which a flag is stuffed in the toilet (Welch, 2000). Amazingly, despite being a recurring motif in art, the flag has not lost its resonance. Here’s why.

The double negative in a defensive comment by a high school senior in Randolph, Massachusetts says it all. Susan Shapiro refused to stand for the national anthem in 1984 and afterwards said, “The flag don’t mean nothing” (qtd. in Welch, 2000). Semantically, one can infer—correctly—that the flag means something. President George Bush concurs: “To the touch, this flag is merely fabric. But to the heart, the flag represents and reflects the fabric of our nation—our dreams, our destiny, our very fiber as a people” (p. 129, qtd. in Welch, 2000). Sylvester (1996) similarly notes, “Certainly the flag is a quasi-religious entity to many Americans and has a collective corporeal status beyond that of object. It represents the body politic, as did the king in pre-revolutionary France....Any attack on the flag constitutes an attack on the body politic” (p. 7). At the risk of oversimplifying the issue, the perspective on the right is, “If you’re not with us, you’re against us” while the perspective on the left is that you can’t have your cake and eat it too, referring to flag protection and free speech.

Although strategies like defecation have been used, burning is the most common form of desecration. (In fact, flag burning made headlines last fall when Abdullah Ismail died after inhaling fumes from the charring of an American flag. Although it was in protest of a film, the fact that American-Pakistani relations deteriorated after the killing of Osama bin Laden (Greenwood, 2012) links it to Stoker’s area of concern). In my research, I did not find any examples of cutting a flag. The closest I found was prominent hippie Abbie Hoffman painting the Vietnamese flag on his back and wearing a shirt with an image of the American flag that said, “I’m more American than you.” His plan, which worked, was that the police would rip it off, making them the culprits. To understand how deeply such an act of defiance affects the American psyche, consider one man’s comment in 1970 to a news reporter. He said that he would kill his own son “without compunction” if he were to rip an American flag (p. 103, qtd. in Welch, 2000).

Stoker’s performance relates to Yoko Ono’s Cut Piece. Ono’s performance involved sitting on a stage on multiple occasions while members of the audience removed pieces of her clothing with scissors. Bryan-Wilson (2003) argues that Cut Piece was a war protest, citing as evidence photographs of Hiroshima survivors whose clothing was blasted into pieces. The pieces Stoker cut were initially as small as these smithereens. Laid in rows of alternating red and white to maintain the pattern of the flag, they became gradually larger over time, giving viewers an incentive to return to White Box because the end result could only be predicted to a degree.

While rich connections can be drawn between X and works like Cut Piece or What is the Proper Way to Display a US Flag? as well as to the history of flag desecration, what hardly passes for an artist statement on Stoker’s website suggests that these links are coincidental. Unlike more substantial statements (Canadian Scott Waters’ comes to mind because of the comparable subject matter), her site simply says that her work addresses “difficult topics surrounding war and the military” (http://www.amystoker.com/index.html/bio.html). It’s as brief as her Twitter self-description as “photographer, video performance artist of all things war and the military” (https://twitter.com/jokerstoker). Unfortunately, no statement was visible in the gallery. Perhaps I'm expecting too much: as Rubin (1994) noted, Jasper Johns ushered in the American flag as a viable subject in contemporary art and he was tight-lipped about his concept.

The two-day performance continues today, from noon to 8 pm.


**To the best of my understanding as a lay person without any legal expertise, statute 136d of General Business Law in New York State would prohibit the cutting of a flag for artistic protest, while the Constitution would defend it.

Faine Greenwood, “Pakistani Protester Dies From Smoke Inhalation After Burning the US Flag.” The Global Post. Retrieved from http://www.globalpost.com/dispatch/news/regions/asia-pacific/pakistan/120918/pakistani-protester-dies-smoke-inhalation-after-b, September 18, 2012

Posted by Heather Saunders at 4:33 AM