“…‘we’ is no longer a dirty word.”—Allyson Mitchell

North Bay felt noticeably cooler on Friday, not because we’ve been in a deep freeze (which is true), but because Allyson Mitchell and Deirdre Logue paid a visit to Nipissing University to talk about Toronto’s acclaimed Feminist Art Gallery.

“Now we get to say FAG, FAG, FAG all the time,” says Logue, referring to their acronym. Reflecting a queer sensibility, their stance—as Mitchell puts it—is, “Why would we want to be a winner in this hierarchy?” Logue elaborates on the need for an alternative to an art system favouring straight white men: “As a generation of women in our very late forties…enough is enough.” Simply put in their crocheted banners exhibited last May at the Tate Modern, “We can’t compete,” “We won’t compete,” We can’t keep up,” “We won’t keep down.” Much like graffiti artists, Logue says, “We’re healing through agitation.” 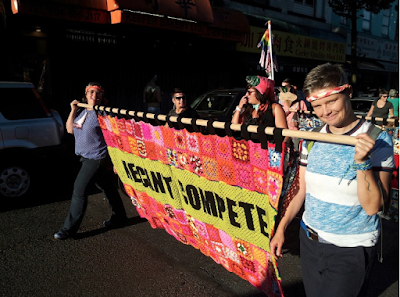 As much as the gallery emerged “out of this place of anger” (Mitchell), its co-founders have a cheerfulness about them. An example that comes to mind is Logue interjecting with, “Snip, snip” as Mitchell spoke about film censorship. It’s a winning combination that seems to have permeated their entire approach to the gallery. Logue notes that even the heart-shaped cookie with the FAG acronym on their Facebook profile photo has a tending element. The same goes for the pairing of crocheted granny squares and agitated statements at the Tate. Mitchell notes, “By using the model of ‘tending towards,’ people don’t try to run away as fast.” If anything, people are running towards.

400 people attended the first opening in the 450 square foot exhibition space within their garage. “We didn’t know if we had enough toilet paper or cheesies!” Logue recalled. Leading up to that big night, they adopted a radical business model. They chose to forgo a business plan, because as Mitchell says, “That perfect moment may never happen.” Instead, they got together with about 100 people and asked what they would like to see in a feminist gallery. Following the shift that other feminist centres like La Centrale Galerie Powerhouse (Montreal) are experiencing, they decided against having a women-only space, feeling that it would be restrictive. Mitchell points out that ‘we’ is no longer a dirty word. It can reference, say, the 99%. Drawing a connection to the Occupy movement, Logue later clarified, “We are not for capitalism.” Rather than relying on public funding, FAG accepts donations from the public. Through this ‘matronage program’, they pay artist fees and travel stipends.To cultivate a sense of belonging, they kick off openings by serving home-cooked meals and their house is a billeting hot spot.

Initially, they planned to have about 10 per cent of the programming they currently coordinate. Suffice it to say, the project snowballed and administration now accounts for at least four hours of each day. Their “feral curating” or “fairal curating” is guided by intuition. Although there are elements of artist-run centres to be found (which is not surprising given their professional backgrounds), they don’t have a programming committee and they don’t accept submissions. With one ear to the ground, FAG shows artists recommended by the couple’s friends and colleagues. They basically give the artist or curator carte blanche and support. “We don’t choose feminist work,” says Logue. “We try to create a feminist approach to what curation is.”

In a time when intellectual property is guarded, it is refreshing to hear them endorse the appropriation of their model. The audience cheered when they suggested North Bay establish a feminist gallery. Major institutions like the Power Plant Contemporary Art Gallery and the Tate Modern have taken note of their generosity of spirit. Mitchell says that they are still doing the math about whether these partnerships are worthwhile, but either way, she’s alright with being co-opted because she feels that FAG can co-opt the bigger institutions even better. For instance, at the Tate, they brought along eight other artists to deliver their workshop. Logue compared the strategy to putting a brick in the back door. With content like cruising and misandry in the mix at the workshop, Mitchell says, “If they don’t know what’s coming, they can’t really keep you out.”