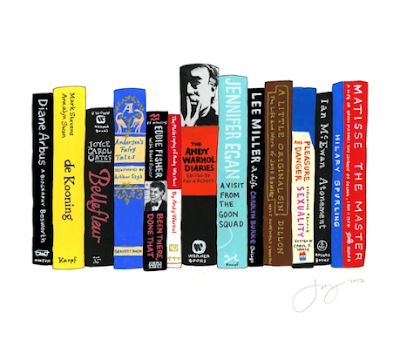 I have a bad habit of breezing through galleries, but I had to tear myself away from Jane Mount’s My Ideal Bookshelf at Jen Bekman Gallery in Soho (http://archive.jenbekman.com/shows/jane-mount-ideal-bookshelf/). It’s an interesting counterpoint to the last opening I attended in New York: at Art in General, Meric Algun Ringborg displays uncirculated books from a particular library in Library of Unwanted Books. Mount’s show, in contrast, features painstakingly painted reproductions of beloved books recommended by creative luminaries. The inclusion of books written by the likes of Herman Hesse and Naomi Klein make the project resemble a university reading list, but authors like Gary Larson (cartoonist for The Far Side) prevent it from coming off as pretentious. As for recommenders, a range of public personalities is covered, from comedy producer Judd Apatow to Kim Gordon and Thurston Moore of former band, Sonic Youth, to Bekman herself.
In the gallery, each painting has the recommender’s name written on the wall underneath. In the catalogue (Little, Brown and Company, 2012), text written in the first person sheds light on some of the tomes that made the shortlists. These accounts reveal that books tended to be included in the individual’s ideal bookshelf in relation to their vocation or as a marker of personal development. It’s not all serious though: a chef includes the books from his restaurant bathroom and a writer admits to picking up The Little Sister for the “hot chick” on the cover. (Side note: this reminds me of a recent news story about Anne of Green Gables, Canada’s precocious literary heroine, who was represented on a reprint as a buxom blonde instead of as a gangly redhead. And this Lucy Maud Montgomery classic is one of the featured titles). There are certainly stories left untold. Patti Smith, for example, says nothing of the fact that Allan Ginsberg, whose book is central to her collection, was a personal friend (who initially hit on her, mistaking her for a man).

The books are reproduced as if on a shelf, either upright or stacked. Resembling little cityscapes, the books look--quite reasonably--like bastions of civilization. The shelf is not represented so the books float on a white background, as if by magic. Only the occasional cover faces out so the aesthetic is heavy on fonts. Mount even teases the viewer with some spines that lack text. With a cheerful colour palette; text aligned imprecisely; and contours that quiver here and there, the exhibition is wonderfully whimsical. If you are the type of person who walks into someone's home and immediately peeks at the bookshelves out of curiosity rather than judgment, chances are you will enjoy this exhibition.