"To crack a nut is truly no feat, so no one would ever dare to collect an audience in order to entertain it with nut-cracking. But if...one does do that and succeeds in entertaining the public, then it cannot be a matter of simple nut-cracking." ~ Franz Kafka

After driving two eleven-hour days to Halifax to celebrate our wedding anniversary, my husband and I were in dire need of a long walk. It was fortuitous, then, that we spotted a poster for D’Arcy Wilson’s performance art hike through Point Pleasant Park on our first night there, July 31. 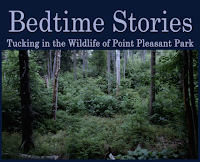 Wilson is an interdisciplinary Halifax-based artist and Point Pleasant Park artist in residence who is concerned with the lack of connection between humans and animals. In Bedtime Stories: Tucking in the Wildlife of Point Pleasant Park, she led a small group of adults to various locations in the wooded park, where she read children’s stories aloud to the wildlife at nightfall. In doing so, she tapped into a long line of artists like Joseph Beuys and Richard Long; the former interacted performatively with a live coyote and a dead hare, and the latter walked extensively through the wilderness. At the same time, Wilson tapped into the 21st century trend of relational aesthetics, the non-object-based experience of art where community is key. A quotation from the recent book, Spheres of Action: Art and Politics (Tate Publishing) comes to mind. Maurizio Lazzarato, in describing Kafka's character, Josephine, singing and piping for the mice people, says, "Josephine does not measure herself up to the list of artist traditions, but she plugs into the outside, into what happens. She makes art as much with small events as she does with large ones."

Wilson’s first destination was a pond surrounded by vacant picnic tables; at that hour, aside from a few dog walkers, we had the place to ourselves. We sprawled on the grass and she kneeled down, perched in such a way that her voice was directed at the water and not the void above it. She began reading Arnold Lobel’s tale of Frog and Toad and the missing button with enunciation befitting a children’s librarian or primary school teacher. Ribbits sounded throughout and conveniently, after her final goodnight wishes.

The photographer and videographer both had a privileged viewpoint, because they were able to move around and position themselves opposite the artist, who always read with her back to the audience. Documenting performance art is necessary in terms of enriching art historical research, enhancing artists’ grant applications, etc., but for the participants—the ones who, in Wilson’s words, made a big commitment by coming out—there is a trade-off. The documentation will surely convey tranquility, not capture tranquility tempered by the distraction of documentation.

Since adults are no more accustomed to being the audience for bedtime stories than animals, some of the distraction is our own doing. One individual, for instance, was spotted checking a cell phone. Folks, please power down in the face of nature and culture! I don’t mean to suggest I was a perfect audience member. When Wilson pulled out a megaphone for one of the stories, I stifled a giggle. Rather than blaming the performance for my waning attention, I chose to dig deeper and question whether I might have lost my sense of wonder. How would the child version of me react in my place? Rapt, undoubtedly. And that is a powerful realization.

Wilson, in contrast, was not short on wonder. She delivered the stories in her shoulderbag in a cheerful tone and was exuberant as she guided us from site to site. With her hair swept up in a bun, it was easy to see her expressions in profile as she marvelled at her surroundings. At one point, she gestured to the sunset and whispered, “So pretty!” As night fell, she took to reading by a headlamp, and the pages assumed a magical glow.

When the performance was over, a group of complete strangers made their way through the dark forest. Personally, I spent most of that stretch feeling grateful that I had never watched The Blair Witch Project. Finally, we arrived to the parking lot, and said goodbyes in hushed tones. Seconds later, five motorcycles careened through the street, making excessive noise. The fact that I bristled is an indication that I was indeed charmed. Image: Poster detail advertising event. Reproduced in 2019 via fair use/dealing. Source: https://www.darcywilson.org/recalling-your-presence-while-calling-your-name/jtuzkmi2d103eksc1mz17tec3os1r1
Posted by Heather Saunders at 2:17 PM