“The work then becomes a living entity…” 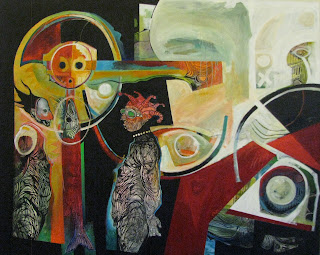 North Bay artist David Carlin is at once serious and silly: when we toured his mixed media exhibition, INTRANSIT, at the Alex Dufresne Gallery in Callander, Ontario, like a seasoned self-promoter, he made sure to mention his exhibition, Caged, in Englehart at the Englehart and Area Historical Museum with Lionel Venne. “My work is in two museums,” he said in a serious tone. He followed the comment with, “I must be getting fossilized,” and his giggle turned into a snort.

After a celebratory pasta dinner with much giggling, I strove to get David back into serious mode with the following questions.

H-You work in painting, printmaking, ceramics, video, collage, and probably some media I have overlooked. Do you have a favourite?

D-Not really...all the media are becoming integral factors in my work, although presently, I am enjoying video, which I find to be a medium consistent with my tendency to layer in non-video works. In recent years, I have developed a schedule of working on rough ideas for video, cutting blocks, and proof printing in Havana. Then in May when I return to Canada, I print and work on ceramic sculptures. In June, I begin the integration of the prints, sculptures, and painting into mixed media works. I also begin the final video pieces at that time.

H-Your opening is the first I’ve attended with Aboriginal drumming and smudging. When we initially spoke about that choice, you said that there is spirituality [present] before you make something. Do you see yourself as something of a facilitator of images that already exist and are just waiting to materialize, or did you mean something else by the comment?

D-The ceremony is a blessing and a way to give thanks for life...for creation. It is an important act. I think the seeds of my images grow from my life experiences. In the multitude of physical actions used in creating a work, a multitude of associations are being made. The work then becomes a living entity, one which is always changing and prompting its creator into developing its life form.

H-This is a follow-up question: when you looked at the piece, Mothman Transformation, you said, “The more I look at it, the more I wonder if it could be a self-portrait," as if the genesis of the image were somehow out of your hands. Is curiosity a critical component in your assessment of your own work?

D- Yes...sometimes...actually, oftentimes...I ask, “What is this?”  It may be months or years before the work speaks to me of its meaning.

Q-On occasion, you've referred to your works as ‘things’ and said, “I’m just a maker of images.” Is this democratization of art-making the result of years of working as an art teacher?

D-I think that “ART” and “ARTIST” in the eyes of many, if not most, are elevated terms that set them above others...but most people, in some way, are creators, are thinkers. I am a creator of images and a thinker. Most of my images pose questions not only to the viewer but to me as well. (I have included some commentaries in the show about me...visionary...etc.)

Although I taught “art,” I strove to make people think, to ask questions, and to evaluate.  A couple of years ago, I received a small wooden sculpture and a card from a former student. The card said, “To a great teacher who challenged us to think outside the box.” This was an important gift for me. The sculpture hangs on a wall in my studio alongside the card as a constant reminder to me...our artists, scientists, engineers, gardeners, mechanics, politicians with vision all have to think outside the box...at least sometimes!

H-My favourite work in the show is An Interesting Conversation before the Emperor of the Sun (pictured above). You reworked this piece at the eleventh hour, after a brash comment from your wife. It’s an interesting anecdote, because she's also demonstrated great support for your work. Do you care to comment on how the dynamic of your relationship impacts your work overall?

D-This is a large work done in a small space. When I put it up at the gallery, I went, “Aaaarrrgh!” It was not working, and Judith [Carlin’s wife] implied that it was not a conversation with the viewer, but bullshit, and we had a good laugh. I repainted it on the wall! We joke around a lot. I will say things like, “Judith, inspection time” or, “What do you think?” I value Judith’s opinion and sometimes I even listen! Hahaha.

H-You split your time between Canada and Cuba. How do the technical challenges impact your creative process?

D-I love my studio in Canada because it allows me to make ALL the components of my work. Facilities are limited for me in Cuba. I work on printmaking in the Taller Grafico de Guanabo in Havana with Norberto Marrero and Janette Brossard. While in Cuba, I also concentrate on video where I have a small green room for video production.

H-How do reactions to your work differ between Canada and Cuba, especially in light of the fact that the emperor (and arguably by extension, totalitarianism) is a recurring motif in your work?

D-My work has always had underlying and sometimes blatant social commentaries. So does much of Cuban art. The reactions are not much different.

H-Next on your plate is Entrevistas, an installation that includes painting, video, and sculpture for the exhibition Reel Northern 2 at White Water Gallery in North Bay. What’s next after that?

D-Rest! I intend to work on oil paintings in conjunction with printmaking, video, and drawing.

*Carlin studied mural painting with Siqueiros in Mexico. He and his first wife, Sheila Elspeth McRae (a classmate from the Ontario College of Art), lived in Cuernavaca and Taxco in 1968.

Posted by Heather Saunders at 6:54 PM