Anita Steckel at the National Museum of Women in the Arts

“Not one to mince words…”

This week, Exposure: Anita Steckel’s Fight Against Censorship opened at the Betty Boyd Dettre Library and Research Center within the National Museum of Women in the Arts (Washington, DC). En route to a conference in Atlanta, I made a four-hour detour to visit this archival exhibition. Steckel (1930-2012) was a Second Wave feminist artist and educator. Her personal papers were donated to the NMWA, and excerpts are on display until May 9, 2014. 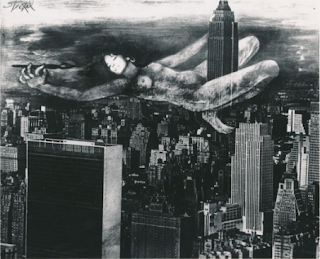 Steckel was an easy target for censorship, because of the directness and brazenness of her work. Consider the collaged piece from 1971 in the exhibition: a colour reproduction of the American $1 bill, it had ‘Legal Gender’ handwritten along the top and Washington’s face enclosed in the shaft of a sketched penis. Equally ‘to the point’ is a photograph with an altered New York skyline. Skyscrapers are extended by Steckel’s hand with their rooftops converted into phallic heads--as if anticipating a plot on How I Met Your Mother in which the character Ted gets his big architectural break by pitching an alternative to a design that looks like a penis with its pink colour, apex, and bulbous forms at the base. Another cityscape, pictured here, shows the Empire State Building as a shaft being straddled.

At Steckel’s 1972 exhibition at Rockland Community College, “one of the less controversial works,” as The Journal News put it, was a Statue of Liberty postcard, on exhibit now at NMWA, containing a hand-drawn female symbol emerging form the fiery torch. The newspaper included an image of said work, but not the more contentious images featuring male and female genitalia. Legislator John Koman wanted to shut the show down for its reportedly pornographic nature, but after a closed meeting of trustees and pushback from students, the artist was victorious. In an unsurprising move based on the show’s title, The Sexual Politics of Feminist Art, Steckel used the experience as a springboard for forming the Fight Censorship Group. Its members included Hannah Wilke, Louise Bourgeois, Joan Semmel, and others. In its ten years of activity, they did things like pressure curators not to follow Koman’s lead, and petitioned major New York museums to open Adult Galleries, where the proverbial fig leaf could be ripped off. Like the Guerilla Girls, they were angry about the disproportionate number of female nudes to male nudes in museums, appealing to the male gaze. Steckel writes in a statement for the FCG, “If the erect penis is not wholesome enough to go into museums—It should not be considered wholesome enough to go into women.” Not one to mince words, she wrote that artists must operate in absolute freedom from censorship, to protect the right to produce works like “the open-legged whores of Toulouse-Lautrec.” She writes of the “white-gloved hypocrisy—which pretends we [women] don’t even know what is meant by a ‘dirty joke.’ Don’t know—hell—we’re the entire subject matter of all those ‘jokes’ we’re not supposed to know the meaning of.”

Her 2006 journal indicates that her dedication to the cause never wavered. She wrote, “Don’t turn lemonade into a lemon” and, “Risk Everything/ Be a Warrior.” Although she did not receive critical acclaim in her formative years as an artist, in 2006 she was mentioned in the catalogue for the high-profile exhibition, WACK! Art and the Feminist Revolution, even though she wasn’t included in the show itself. The NWMA wall text notes that this catalogue essay revived interest in her work. Indeed, in 2007, the New York Times described her as having been overlooked for too long (1). The wall text also credits the Fight Censorship Group with having created a more accepting atmosphere for women artists’ provocative works.” To Steckel et al., I say thank-you.