“There’s something about small towns in the north…”

Unpresupposing in light of winning the prestigious Sobey Award last month, Duane Linklater thanked the audience at his artist talk yesterday for coming out to campus first thing in the morning and said he hoped they wouldn’t mind if he shared some slides. He also expressed interest in “taking the air out” of the art historical trope of artist-as-hero. “I find it problematic, the idea of an artist having a special gift.” 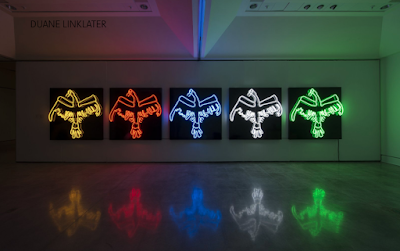 The importance of the $50,000 prize was underscored when the North Bay artist revealed that he initially wanted to expand a work he showed at nearby White Water Gallery in 2011 to include four more components, but because he was working with pricey neon signs, its realization was delayed until this year. Tautology features five differently coloured birds, each appropriated from a painting by Anishnabe artist Norval Morrisseau (called Copper Thunderbird, 1932-2007) selected by former Governor General Michaelle Jean for display in Rideau Hall, “where the Governor General does Governor General types of things.” By shifting the context, Linklater observed that “something funny and slippery happens.” Unconventional collaborations (with, for example, a deceased artist) and new contexts in the exploration of Aboriginality characterize his multi-media work.

An Omaskêko Cree, Linklater says, “The moment that politicized me, as a teenager” was the Oka crisis of 1990. On his bedroom wall, he hung a picture of masked warrior, Richard Nicholas, standing on top of a squad car during the standoff over contested land. From that point on, he began independent research and took a Bachelor of Arts in Native studies. He also holds a Bachelor of Fine Arts and a Master of Fine Arts. Linklater says, “Art can…help you…it can…offer a reckoning or a process through tragedies [like Oka].” So often, tragedy offers up stories of hope and this one is particularly gripping: Linklater played a wax cylinder recording for the audience of Santu Toney, a half-Beothuck woman in her mid-seventies from Newfoundland who met an anthropologist in New England, rousing disbelief in the link to the extinct Beothuck tribe. Linklater provided cellist Peggy Lee with sheet music of Toney’s song transcribed by an ethnomusicologist, to be perfomed at his exhibition at Or Gallery (Vancouver). The show also included email correspondence with Joanna Malinowska, a Polish artist whose representations of Aboriginal concerns and Aboriginal artwork in the Whitney Biennial and in her practice in general were politically suspect, in Linklater’s view (the two artists had agreed that any of the text was fair game for future exhibition). “Collaboration brings so many things….It’s always going to change….You don’t know what…the outcomes will be [which is what’s]…super-exciting about art.” When he approaches collaborations, whether moose hunting with artist Brian Jungen, or working with a Bard College groundskeeper to plant 12 blueberry gardens for his MFA thesis, “It (the treaty concept)’s always floating around me.”

Linklater commented that it felt different presenting on his work in the city where he lives. Besides getting ready in the comfort of his own home, he alluded to the resonance of an image of his installation of raspberry bushes in a Chelsea, NY gallery when discussed in North Bay, where wild raspberries grow on his property. He also recounted walking into Ontario Northland and asking for information about the history of their logo, which he ultimately painted on the wall of Susan Hobbs Gallery in Toronto as a tribute to the now-cancelled train that acted as a vital connection between northern communities and southern Ontario. Without an appointment, he was able to meet for 45 minutes with a marketing representative, get a binder of photocopies the following day, and receive a “really friendly” letter. He noted that if he had walked into a train station in a larger city in Canada, he would probably have waited six months for that kind of progress. “There’s something about small towns in the north that allows you to do things like that,” he said. (This anecdote really captures the essence of North Bay; the day I moved back to the city, I ran four errands and every sales clerk or service person I encountered smiled and initiated a conversation with me. It’s a city where I’ve been offered a ride from a stranger when carrying too many groceries and had a homeless person hold an umbrella over my head while I’ve rummaged for change for them.)

He ended with refreshing advice to the many young artists in the crowd. At the risk of misrepresentation through paraphrasing, his advice is:
*There is no set plan to become an artist, and everything you do—even the unenjoyable things—helps you develop as an artist.
*Don’t get caught up in the pressure to make work or feel like you have to have a studio. Do what you really want to do, and envision your practice in a more holistic way. (For instance, Linklater sees discussions as a major part of his work).
*Don’t get caught up in definitions. Is a film about collaborative moose hunting really art? Is working with a groundskeeper really collaboration? Does it matter?
*Be flexible when dealing with authority figures.
*Be true to your principles. If you’re offered a show and there’s something unethical about it, it’s not worth pursuing.
*Opportunity is always there. It’s just a matter of finding it.