Coincidentally, I was reviewing notes from the conference in tandem with preparing a lecture on conceptual art for a class I’m teaching this semester. The parallels between contemporary site-specific work discussed in the symposium and conceptual art a half-century earlier leapt off the page: the secondary status of the object, the active role of the spectator, the interest in semiotics, and the subversive tendency that is sometimes playful and other times utopian—all leading to questions about the relevance of the gallery system and the art market.

Site-specific art retains an element of dematerialization, often in spite of itself. For example, Sarah Cook recounted a work by Edouardo Kac she curated into a festival in Mexico City, consisting of a transgenic plant whose growth in a greenhouse was jeopardized by an earthquake. In a recent installation co-curated by Susan Cahill and Laura Peturson in North Bay, Jamie Latham’s water-filled jars featuring self-portraits were confiscated by police for chemical testing before anyone else saw them. One of Gil McElroy’s memory tables—angled picnic tables partially charred and inscribed with poetry—was only installed for an afternoon before it was stolen. Perhaps providing karmic balance is a visitor’s note scrawled on an LCBO bag pleading with passersby to not destroy a Toronto fort built over and over again with materials like rebar by Gram Schmalz and Laura Smith, dubbed the “end of the world crew” by locals (and known officially as the Physical Futures Initiative). Of course, some installations, like Ice Follies, are designed to be temporary. One morning, Dermot Wilson awoke with the vision that Lake Nipissing was like a blank canvas. Nine years later, the biennial on the frozen lake remains in full swing. Lieann Koivukoski called it “North Bay’s best kept secret,” and visiting the installations between sessions made for the best conference break I’ve ever had, personally. 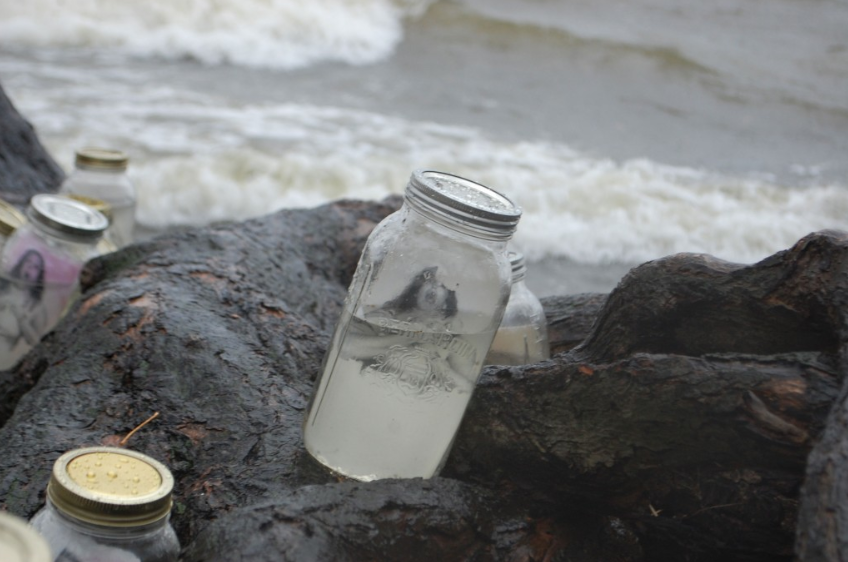 Image: Drowning and Drowned Out in situ, by Jaymie Lathem. Courtesy of Near North Arts

A question that resurfaced throughout the day was whom art is intended to affect. The democractic answer need not be stated, but it was interesting to see the nature of that democracy teased out. Site-specific art maximizes audience, connecting artists and curators to a public largely unexposed to art historical rhetoric, or as McElroy put it, people who haven’t lost their sense of adventure or been trained to avoid excitement. It’s a place to move beyond what performance artist Laurie Anderson calls ingrown situations, to stop preaching to the converted. Cahill envisions a shared communal space where spectators don’t feel like they have to know the answer, but they can have their perception change as they enter the site. The word ‘can’ is important: spectatorial agency means that individual response is unpredictable. Site-specific art tends to have unstructured moments, as Schmalz noted, and there’s a range of potential aesthetic-affective responses. There were many stories of children being delighted, but in an era where Pussy Riot members could be jailed for performing in a church, I, for one, appreciate that the conversation wasn’t restricted to affects of pleasure. Serena Kataoka, for example, recalled visiting a men’s shelter with musical performers called the Subatomic Monks and experiencing sexual harassment that morphed into a positive jamming experience. She also described a peaceful protest on Queen Street in Toronto called Free Parking Space, during which she wore a cardboard car while cycling; it lead to criminal charges, which were ultimately dropped. It’s no wonder she eschews documentation of collaborative interventions. Similarly, when the Near North Media Lab took its trailer to Huntsville during the G8 summit to make work, Koivukoski said the group was under constant surveillance and that she’d never been carded so much in her life. Wilson suggested that art’s purpose is to improve the health of society, but these examples demonstrate that there’s no way to know whether it will take or not.

An example of a site-specific festival that the community really took to is Nuit Blanche, Toronto’s all-night art extravaganza. Steve Loft commented that every city seems to want their own version, which reinforces Cook’s observation that there is a “privilege of play.” So what’s a small city to do? In Sudbury, La Galerie du Nouvel-Ontario hosts an alternative art fair every other year. Some 30,000 people have taken in their installations, many from the driver’s seat of a car. Danielle Tremblay recalled that when she co-founded GNO and became its general director, they didn’t have walls for work so they went out into the community and co-opted spaces like billboards. “We were like dogs marking our territory,” she said, laughing. David LaRiviere is also a proponent of billboards in his role as director at PAVED Arts, featuring such gems as Karen Elaine Spencer’s postcards to Stephen Harper in a collaborative project with AKA. He has also pushed against the “flat affect” of advertising by putting his own work in public in the form of movie posters installed at theatres. Smith pointed out that there is a place for intimate festivals even in a large city like Toronto. The Queen West Art Crawl and Art on the Danforth can be refreshing because they don’t tend to be congested or to be associated with partying. The trick with small festivals, Koivukoski said, is that they may have a huge impact on a small community but the figures can appear inconsequential to funders who are comparing the population to larger centres. Furthermore, Tremblay noted that it’s challenging to demonstrate quality over quantity in these situations. Fortunately, from the organizer’s perspective, as David LaRiviere said, “Affect is undeniable.”

On top of the seemingly endless cycle of applying for and reporting on project grants, curators must act as cultural ambassadors to convince governing bodies that it’s a good idea to put art where the masses can see it. Also on the topic of negotiations, audience member Duane Linklater stressed that there should be consideration of the use of Indigenous land for site-specific work. Thus, cultural producers would do well to follow Gil McElroy’s lead in remembering the Hippocratic Oath (first, do no harm, etc.) when approaching site-specific work. Sensitivity to the history of places is complicated by the fact that, as Cook noted, there are “cartels of curators” traveling the globe, without a connection to specific locations. They may not, in fact, be associated with a particular gallery at all, demonstrating a shift from the traditional definition of curator as custodian of a collection. This may be for the best, as Cahill suggested that galleries aren’t necessarily the most accessible space. Yet, as Tremblay said, they’re unlikely to disappear, so curators may as well be imaginative in their use of the white cube. Even the educational responsibilities of curators are shifting, evident in the comments of the Physical Futures Initiative: Schmalz enjoys having spectators teach each other and Smith says that she and Schmalz have “learned so much from the non-artists.” Perhaps, then, curators have become more facilitators of artistic exploration.

Posted by Heather Saunders at 5:35 PM