Tuesday’s Goldfarb Lecture in Visual Arts at York University by Shary Boyle was standing room only, further to “tweets in the thousands,” as Professor Barbara McGill Balfour noted in her introduction.

Refreshingly down-to-earth, the featured Canadian artist in the most recent Venice Biennale closed the door herself when noise filtered in from the hallway, paused when latecomers arrived so they wouldn’t feel awkward, and—revealing what Murray Write called her “goofy repartee” in Canadian Art magazine (1)—asked at one point, “How ‘bout that cave art?” 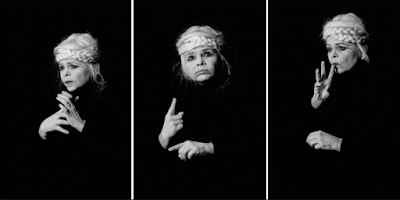 Boyle’s presentation was structured around her multi-media installation at the Biennale, providing a stylistic roadmap of sorts of how she got there. She began by sharing a film from the installation called Silent Dedication, in which an American Sign Language (ASL) interpreter signs a poetic tribute to “heroes of silence.” She cites Charlie Chaplin as an influence, calling his silent films “heartening and inspiring for keeping spirits up about humanity.” Characteristics of silent film and sign language dovetail with her art because she’s “always straining to tell a story…through gesture.” In fact, she revealed that if she weren’t an artist, she would like to be an interpreter (she has several years of training in ASL to boot).

She maximized the opportunity of exhibiting in Venice, using it as a platform to give voice to the silenced, from missing women to Pakistani activist, Malala Yousafzai. Author Sheila Heti, in describing an earlier work by Boyle, captured its essence: “…we are not merely looking at the woman here—we are the woman.” (2) Boyle explained, “I can’t speak on behalf of anybody but I can share.”

Her approach in the Biennale installation, Music for Silence, can be traced to her tendency as a child of “finding solace in drawing” and recognizing loneliness as “exquisitely beautiful.” From a young age, she never wanted to be an artist for the sake of being an artist. She simply wants to make life more meaningful through communication. “Language is so fraught,” she observed. “Isn’t art a language?”

How does an artist transition from working out of her living room without assistants to being courted by Louis Vuitton and jet-setting to Venice to prepare an installation seen by 250,000 people? There are several answers. First, inertia. Boyle spoke of constantly pushing beyond her comfort zone and habits to “places that are mysterious.” As a primarily self-taught ceramicist, she finds enjoyment in “testing the limits of yourself and materials.” She collaborates in unconventional ways, like visiting the homes of grey-haired hobbyists to learn more about ceramics. “There’s no scene; it’s not cool,” she admits. Second, an openness to exploding the categories of art. She’s known for live drawing performances with projections of fantastical images and vivid colours complementing music of the likes of Feist and Peaches. These undertakings are driven by her admiration for the immediate impact music has on general audiences and from an “urge to connect” with practitioners of a form of expression sharing much in common with visual art. “There’s something about cross-disciplinary practice that is super-enlivening,” she says. Third, love your work, but not in an egotistical way. It would be fair to say that Boyle bonds with her work. When working with life-size sculpture, for example, she says, “You’re making a relationship,” akin to interacting with an actual person. She works from memory rather than photographs, with an appreciation for the “tenderness” that results from imperfections. She also aims to “belligerently ignore” the bias against craft because she “enjoys making things with my [her] hands.” Ultimately, in the face of trends and expectations, she says you have to think about how you want to spend your time as an artist.

As a feminist, she has made bold moves. For example, she has used unambiguous titles, like Intersex. She shared that gender has always been of interest to her. Rather than buy into the binary perspective of male-female, she asks, “Aren’t we all a combination?” Also, she “brought the taboo subject of rape into the museum” through a series of ceramics featuring mythological figures like Persephone, commissioned by the Art Gallery of Ontario.” Her work, while progressive and transgressive, is never too hard-hitting. “You don’t want to re-traumatize people,” she cautions.

This post is dedicated to Paul Kipps (1948-2014), an unforgettable professor. To borrow Boyle’s characterization of Chaplin, he was heartening and inspiring for keeping spirits up about humanity.