Suzy Lake: Playing with Time at the Art Gallery of Ontario 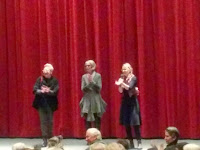 On November 21, the Art Gallery of Ontario was the venue for the debut screening of Suzy Lake: Playing with Time by independent filmmaker, Annette Mangaard.
The feature-length documentary opens with Toronto-based artist, Suzy Lake, developing film. In this immediate reference to the theme of time, she shakes a developing tank back and forth, back and forth, highlighting the mundane nature of this particular part of her otherwise captivating practice. It counteracts any presumptions of glamour, as do later scenes like a pigeon crossing Lake’s path while she adjusts a tripod. The arguable irony, of course, is that the act of making such a film is glamorous. It’s been a while since I watched films about grande dames like Marina Abramović or Vanessa Beecroft, but it strikes me that they stand in contrast to Mangaard’s almost four years of coverage of Lake, who comes across as a grounded artist.
Mangaard purposefully avoided pandering to the feminist adage, ‘the personal is political.’ The audience does learn that Lake was born and raised in Detroit, where she began making art as a child, and that she relocated to Montreal in 1968 at age 21 with her husband, a draft dodger. She recounts him being asked at the border if he was bringing in a car, a wife, or cattle, which underscored the perspective that “a wife was property.” The focus, however, is on Lake the artist. She states that she is more interested in the audience knowing what she is than who she is.
As to what Lake is, gender invariably informs the answer. Her Choreographed Puppet Series, which she began in 1976, communicates the concept of women as property without relying on personal anecdotes: she created a harness with straps that allowed her to be moved like a marionette by friends stationed on the top of a box, resulting in photographs of the jarring movements. Through such performative photographic self-portraits, she subverts the male gaze. Like her contemporary, Mary Beth Edelson, she takes the approach of, “I’m not trying to flirt with you” (Edelson). Lucy Lippard, who defended Lake’s early work when it was seen as radical, observes that Lake made “people see that a body was just a body.” She has continued in this vein, making works like large (read: imposing) portraits showing off her post-menopausal chin hair. “Ageing is just a different beauty,” she says matter-of-factly of the series.
In terms of appreciating the performative nature of her work, it’s terrific to see footage of images unfold rather than just seeing the finished products of still photographs. Personally, I was able to see Extended Breathing in Public Places (2008-2014), in which the artist attempts to stand motionless in loaded settings like the Detroit Institute of Art and the World Trade Centre construction site for an hour-long exposure, as evocative of an early daguerreotype in which the sole human activity in focus is at a shoe-shining station, with the rush of modernity reduced to a blur.
Interview clips with Sarah Angelucci, Barbara Astman, Connie Butler, Mary Beth Edelson, Lucy Lippard, Lisa Steele, Françoise Sullivan, Dot Tuer and Martha Wilson are included. Only one man, gallerist Donald Browne, speaks about Lake in the film (and ever so briefly), which has the effect of both celebrating women as authority figures and reinforcing the prominence of female voices in feminist art history. The multiplicity of voices is a strong contribution, but the occasional soundtrack of a voice without confirmation of the speaker’s identity is disorienting; I found myself trying to anticipate who the initial narrator was and once the interviewees had been shown on screen, trying to recall whose voice sounded like a match.
Numerous connections could be drawn between Lake’s work and the works of other feminist artists. Her Transformation (click Next for Gary William Smith) series, begun in 1973, comes to mind for its coincidence with Ana Mendieta’s gender-bending bearded self-portraits. Mangaard considers the complementary practices of Lake and Wilson, adding to the Canadian flavor of the film, since Wilson worked at the Nova Scotia College of Art and Design during the period where she and Lake discovered one another’s work through personal recommendations and snail mail. "We're the same person!" Wilson exclaimed in the Q&A that followed, noting that they were born in the same year and they address similar subject matter.
Following the screening, a discussion ensued stemming from Lisa Steele’s question in the film about how far society has come. Wilson commented that she wants to punch someone in the nose when they say we’re in a post-feminist era. Mangaard noted that the film was intended to be a “history of feminism as seen through her [Lake’s] work.” Its archival footage and stories like Jared Sable telling Barbara Astman, “I’m taking on a new gal,” referring to Lake, indicate that we are by no stretch of the imagination in a post-feminist era.
Suzy Lake: Playing with Time is also featured in the AGO retrospective exhibition, Introducing Suzy Lake (November 5, 2014 – March 22, 2015) co-curated by Georgiana Uhlyarik, associate curator of Canadian art and Sophie Hackett, associate curator of photography.
Image, l. to r.: Martha Wilson, Suzy Lake and Annette Mangaard.
Posted by Heather Saunders at 7:16 PM