Reimagining Africanity at the Mary and Leigh Block Museum


“Mutu is not usually seen through the lenses of Afrosurrealism and Afrofuturism.” 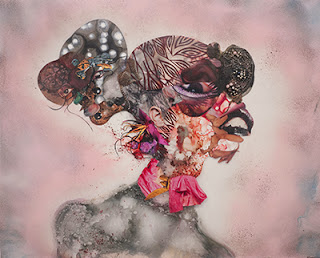 “There’s room for us all on the spaceship,”* was one of the comments on a panel at the Mary and Leigh Block Museum at Northwestern University (Evanston, IL) on November 1, underscoring its suitability as a follow-up to my interview with Sarah Beck about artists and outer space.
The panel, “Voyaging the Fantastic: Afrosurrealism and Afrofuturism in Wangechi Mutu and Contemporary Black Art,” featured artists based in nearby Chicago: D. Denenge Akpem, Krista Franklin, and Ayanah Moor. Akpem is a self-described “space sculptor” who works in installation as well as interior design, focusing on its facilitation of empowerment; Franklin, a poet, is drawn to collage because it “can displace race;” and Moor, a recent Chicago transplant, uses black hair—which she describes as amazingly transformative—as her “original material” in art. All three artists have worked together before, reinforcing Franklin’s later description of Chicago as a “community of makers.” The windy city is also, I learned, home to many black female astronauts.
Franklin stressed the value in recovering works of “black spacey culture” that preceded the terms, ‘Afrosurrealism’ and ‘Afrofuturism.’ The first such example raised was Nichelle Nichols, who played Lieutenant Uhura on Star Trek. Moor commended her for “positioning blackness beyond earth.”
Reflecting on the origins of terminology is also informative. Panel moderator, Alexander Weheliye, professor of African American Studies at Northwestern University, recalled that the term ‘Afrofuturism’ emerged on a listserv whose members hailed from inside and outside academia. As a librarian, I was curious to see if this combination is still apparent in current use. Indeed, the first page of Google results for ‘Afrosurrealism’ links to academic databases, a newspaper article, a film festival website, a blog, Tumblr, and Instagram. For ‘Afrofuturism’? Amazon, a newspaper article, a magazine article, Wikipedia, Tumblr, Facebook, a website showcasing art, and a website highlighting Afrofuturism’s relevance to cultural production beyond visual art. Still, my standby resource for preliminary research, Oxford Reference Online, yields zero results for both terms. Clearly, there is work to be done.
The terms themselves warrant reflection. Franklin cautioned that ‘Afrosurrealism’ and ‘Afrofuturism’ could become like brands and restrict the discussion. And they’re already restrictive. Moor observed that there’s a tendency to use the “same five ways to define some brown person’s work.” Recently, Franklin was on the receiving end of a presumptive and isolating comment that her work was “the Afrofuturist piece” in an exhibition, and Akpem made an artwork during her MFA studies about her mother having breast cancer, which people fixated on as a racialized portrait, rather than a portrait of a woman who happened to be black. Akpem characterized this tendency as surface level treatment and Franklin referred to it as the “pigeon-holing…of black productivity.” Moor said we need to keep expanding the vocabulary beyond terms like ‘identity politics.’ She noted that we should welcome people with different approaches. “This is just one model for this conversation," she stressed. "Other formats are possible.” Franklin encourages constant reimagining, and Akpem recommends “moving out of linear ideas of space and time” because Afrofuturism is “about the here and now” as well as the future. The latter idea might sound nebulous out of context, but not when an earlier comment by Akpem about Mutu’s work is considered: “Take your creation myth and rework it in a future state.” Moor situated her work similarly, noting that Mutu conveys alternate realities and that her work contains a “beautiful fantasy element.”
Weheliye noted that Mutu is not usually seen through the lenses of Afrosurrealism and Afrofuturism. Even so, “she [Mutu] adds complexity to the way that blackness and Africanity have been imagined.” Pointing to this complexity was the frequent identification of polarities in Mutu’s work. Moor identified a sense of ‘womanness’ in figures being submerged or rising up, with striking fluidity. Moor also commented on the pairing of vulnerability and violence, and of construction and deconstruction. Akpem alluded to the push and pull of Mutu’s work by describing it as fetishistic art talismans with a trickster aesthetic. She noted, for example, that Mutu’s figures can be both grotesque and sexy. Franklin likewise described the shape-shifting “formidable creatures” of women hybridized with elements of animals, plants, and machines as both protective and threatening.
After two hours of engaging discussion (I hadn’t even realized the panel had gone half an hour over and that my husband was waiting in the lobby), the audience filtered into the museum’s stellar mixed media exhibition, Wangechi Mutu: A Fantastic Journey (Sept. 19-Dec. 7, 2014; organized by Trevor Schoonmaker, Chief Curator and Patsy R. and Raymond D. Nasher Curator of Contemporary Art, Duke University), which is the first US survey of her work. Walking through the show, I was reminded of Franklin’s enthusiasm for Mutu’s work. When encountering work, she said, “I should be like, ‘Oh, sh*#!’”
*D. Denenge Akpem
Image: Pretty Double-Headed; 2010; mixed media, ink, collage, and spray paint on mylar; courtesy of the Mary and Leigh Block Museum
Posted by Heather Saunders at 8:01 PM