"We need to remind ourselves of history." ~ Shelley Niro

My wish list for the art section of our library has a new addition: Blue Medium Press is publishing a series of monographs about Canadian artists, because as co-publisher Julian Jason Haladyn explained, "We don't see enough of what they're producing." The first volume, Shelley Niro: Seeing through Memory (2014) by Madeline Lennon, was launched last night at OCAD University, in concert with an artist talk by Niro.

Lennon noted that when she received her PhD in art history in 1980 from the University of Toronto, she had not been exposed to even one female artist in her classes. She acknowledged that times have changed but that the need for further recognition is unabated. (That point was underscored before Lennon was invited up to the front, when Niro was introduced without the usual mention of accolades and when her graduation from OCADU was later misremembered). 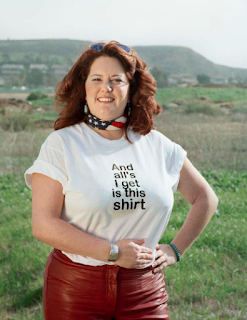 Niro began by highlighting the connection between the ongoing disregard for missing and murdered native women and problematic visual culture, such as the book cover of a provocative-looking Pocahontas, which she described as disturbing. In a gently sarcastic tone, she imagined Pocahontas saying to the explorer John Smith, "You're free to help yourself to whatever" (even though she would have been a child when they met and she saved his life). Her snappy use of language translates seamlessly into artwork. Take the film, The Shirt (2003). In it, which she summarizes in text on t-shirts worn by a friend the atrocities committed against the native community, culminating in, "and all's I get is this shirt."
"We need to remind ourselves of history," she said, and be aware of biased versions of history. She cites Queenston Heights, in which native warriors helped defend the Americans in the War of 1812, as an example. In response, at Rodman Hall Art Centre in St. Catharines in Resting with Warriors (2001)*, she installed sculptures of female warriors outside because she thought, "Where are they [in common accounts]?"
She often blends the personal with the political. For example, the first work she shared with the audience, Waitress (1986), is set in a Chinese restaurant in Brantford, where she is based. In this self-portrait, she serves a customer, who looks characteristically uncomfortable upon realizing that she does not speak Chinese and is Mohawk. Brian and Mila Mulroney dance merrily in the background of the painting, surrounded by burning False Faces Masks, with beadwork patterns underfoot. It was made around the time that the Prime Minister met with First Nations leaders and behaved in a dismissive manner.
Some works like Waitress are darkly humorous and others are celebratory. Some are a combination, like the film, Mars Thunderchild Gets a Calling (2005), in which the optimistic and exuberant main character, Mars Thunderbird, speculates, "Maybe there's still racism." Niro shared that humour and celebration are critical strategies for "self-preservation...[otherwise these situations] can hurt you. In my mind, I try to switch it around....once that mind shift happens, it's so much easier for me [to continue working]. When something is so heavy, you can only understand it to a certain degree."
Ease of comprehension is key to her practice; in reference to several works, she emphasized the importance of not needing to translate the work conceptually. Based on the Q& A that followed, the audience clearly connected with her work, demonstrating its universality.
Niro observed, "Without spirit, nothing would be made." Her prolific career is evidence of abundant spirit. Niro has exhibited at the Venice Biennale; her work is in the permanent collection of the National Gallery of Canada; she was the first recipient of the Ontario Arts Council's Arts Award; and she holds a Master of Fine Arts from the University of Western Ontario.
*This image is a woodcut print made from sculptural installation of the same name at Rodman Hall Photo: Detail of film still, The Shirt(2003), reproduced in 2019 via fair use/dealing. Source: http://shelleyniro.ca/works/
Posted by Heather Saunders at 8:12 PM