On Kawara at the Guggenheim

I must admit that I was so excited to see On Kawara – Silence (February 6 – May 3) at the Guggenheim in New York that leading up to visiting, I was singing ‘On Kawara’ in my head to the tune of My Sharona’s chorus.

Curator Jeffrey Weiss has capitalized on Frank Lloyd Wright's architecture for this posthumous retrospective of the Japanese artist’s work. The spiral formation of the rotunda is complementary to the artist’s endurance and his tendency towards repetition because the wall space keeps going and going, with minimal interruption.

Kawara is renowned for his ‘date paintings,’ which are officially called Today (1966-2013). Spending that long on a series and attempting to contribute to it every day is phenomenal. Daily, he set out to make a painting (or possibly two) with a solid ground of blue, red, grey, or black. He mixed the acrylic paint by hand and kept swatches, resulting in canvases that are unified but not assembly-line-like. After experimenting with Letraset in earlier work, in Today, he painted the date of the day he made the painting in equally precise white block letters. He used the language of the country from which he was working, and if the country did not use the Western convention for writing dates, he used the universal alternative of Esperanto. The paintings are typically small enough to hold with hands shoulder-width apart, but on days that commanded more attention, like the day Neil Armstrong stepped onto the moon, he sometimes increased the scale. If he didn’t manage to finish a painting by midnight, he would destroy it, tying him to the trend of dematerialization that Lucy Lippard identified in conceptual art. Whereas artists like John Baldessari relished destruction (in Baldessari’s case, cremating paintings and baking the ashes into cookies), Kawara seems to have been more about the act of creation, as noted by Ben Kinmont (1).

The tension between creation and destruction always brings me back to the cubists, and this association is helpful for contextualizing Kawara’s work. Georges Braque introduced stenciled letters and numbers to the paintings and papier collés he and Pablo Picasso made in lockstep, to jolt the viewer. His rationale was that type was flat and couldn’t exist in space in the same way that an object would, so it could help the viewer to parse out the image spatially. With Kawara’s work, there are no objects projecting into illusionistic space; the painting becomes an art-object, modern in its flatness. Picasso and Braque referred to these additions as ‘certainties (2),’ which links nicely to Kawara's work. We don’t know what tomorrow will bring, but we can be almost certain that there will be a tomorrow. Braque, along with Picasso, also elevated the status of newspaper to be an appropriate material for art, which I mention because newspapers were a mainstay for Kawara. Many of his date paintings were stored in, and are displayed at the Guggenheim with, a cardboard box constructed by the artist and often lined with a newspaper clipping from that day. As an information professional, I was pleased as punch to see that he recorded the date and publication on most of the clippings, minimizing the kind of extensive research to track newspaper sources for the likes of photomontage artist, Hannah Höch. 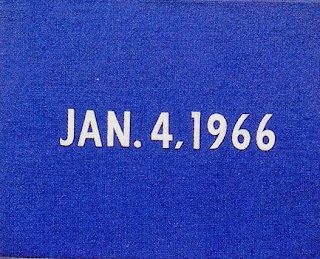 The very first painting from Today, shown above, is sheltered by a vitrine on the main floor. Throughout the rotunda, others from the series are grouped. For example, there is a wall of paintings featuring Sundays. Today inspired other series like I Went (1968-79), a volume of artist books containing maps showing where the artist traveled that day, and I Got Up (1968-79), a series of postcards, which he rubber stamped to announce the time he awoke that day to recipients like Lippard. Inconsistent wake-up times, like 3:59 am and 5:06 pm, suggest that Kawara was not a creature of habit. Paradoxically, the ritual of making this series indicates that he was indeed a creature of habit.

Rather than showcasing his entire output, Silence features selections from series and integrates series. As a result, Weiss highlights the web of connections in his oeuvre and prevents the viewer’s energy from fading. It worked: the only person I saw who wanted to opt out was a cranky toddler. Overall, visitors seemed to pay careful attention and take their time. Surprisingly, for art that might seem impersonal in its objectivity, visitors evidently connected with the work. For example, I overheard a visitor excitedly discovering the language she spoke used in one of his date paintings, and another keeping track of which of her family members’ birthdays she had observed in the series. I found myself most invested in the series, I Am Still Alive in which he sent telegrams starting in 1970, confirming for recipients that he was still alive. I took note of a pen stroke that an anonymous clerk had made under the ‘ill’ of ‘Still,’ compared ‘i am still alive’ to ‘I AM STILL ALIVE,’ and wondered about the emoticon potential of symbols that surrounded this text. The title and concept are heavy with meaning less than a year after the artist’s death and that was something I felt like pushing out of my mind just then, preferring distraction in the details.

Silence emphasizes that our experience of information has changed dramatically. A demonstrative example is one of the artist’s clippings from a Today box, which contains an advertisement about fighting polio encouraging readers to “write for our pamphlet.” The cubists used newspapers in cafe scenes as potent political symbols; it’s how people who couldn't afford newspapers could catch up on global events. When Kawara began his date paintings, the print medium continued to be essential and just as relevant politically. Rubén Gallo observes that Kawara’s clippings from Mexico City outlining the deteriorating relations between the government and students leading up to the Tlateloco Massacre on October 2, 1968 were censored from libraries and archives (3), making his inclusions vital sources for historical research in addition to representing the dissemination of information at the time of publication. 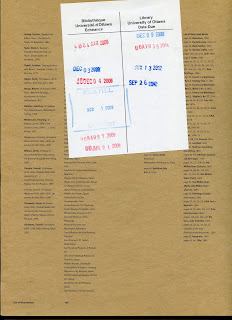 I often fight an uphill battle trying to convince students of the merits of research using books. On the car ride home, I felt I was rewarded for going old school with my background reading about Kawara. I glimpsed the date slip in the back of a catalogue of his work, shown here, and noticed that while my own borrowing of it via interlibrary loan is traceless (read: silent) in the book itself, at least for now, there is a link to the past. This slip of paper shares the following features with Kawara’s work: dates in various but similar sizes, rubber stamping in a limited number of colours, and more than one language. Modest and outdated, it struck me as the perfect tribute to this enigmatic artist, even better than the selfies gallery visitors tried desperately to take before security guards intervened.

(2) The Metropolitan Museum of Art, Cubism: The Leonard A. Lauder Collection. Accessed February 17, 2015, at http://www.metmuseum.org/about-the-museum/press-room/exhibitions/2014/cubism-the-leonard-lauder-collection

Images, in order of appearance: