“…you can have it all with painting.” ~ Alex Landon Richardson


The newest member of our faculty, Alex Landon Richardson, gave an artist talk on March 6 at Nipissing University. 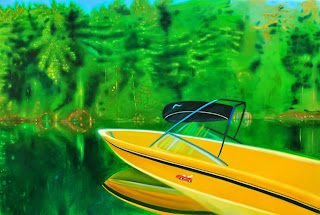 The Vancouver-born, Toronto-based artist observed that the art world has become increasingly global. Richardson is a case in point: she holds a BFA from London, Ontario (from the University of Western Ontario, now Western University) and an MFA from London, UK (from Goldsmiths, University of London). And she just returned from a residency in South Africa. Generous with the extent of advice and encouragement she offered to the many students in the crowd, Richardson described the path from undergraduate studies to working as a professional artist as being “gnarly and curvy…very DIY.” For her, the path pointed west (she worked at vineyards across western Canada while painting) and then it pointed back east (where she joined an open studio in Caledon, Ontario).

Visitors’ feedback at the open studio allowed her working process to encompass impromptu collaboration. She recalled, for instance, a visitor sharing a John Updike poem that contextualized the series she was making at the time for her first solo show at The Rivoli in Toronto. The show featured photo-based works such as Beth & Marj and Cadmium Blossoms (2010)*, a portrait of her mother’s friends who were among the first women working in the financial district of Toronto. Here, they are shown relaxing at the cottage. The figures are sketched in paint, revealing the underlying primed wood surface, while the cottage surroundings are rendered in detail and in colour. The right-hand figure’s strapless jumpsuit dates the source image (my mother used to wear strapless jumpsuits and she just turned 70). Through this body of work, she developed an interest in middle class leisure as subject matter.

Eventually, the challenge and security of commissions she gained in the open studio setting lost their sheen and she decided to relocate to Britain for graduate studies. Although she described London as a difficult city to live in, she acknowledged its incredible history and networking potential. Goldsmiths’ regular visiting artists as well as large enrolment and faculty fostered a culture of frequent feedback, and rarely from the same person twice. Thus, there was no risk of altering one’s style in anticipation. What did affect her style was the city itself. She explained that it no longer made sense to paint with vibrant colour and plasticity as she had in Canada, once she had settled into a city with grit and darkened pub interiors. She became enthralled by the latter for their contrived aesthetic. Thrift store finds were cobbled together into a pastiche that was passed off as if it had accumulated over time. Paintings in pubs struck her as “alive [with] illusion and trickery,” which is curious because as she noted, painting and illusion were comfortable bedfellows for much of art history.

When she began her MFA, “[i]t was not popular to paint at Goldsmiths.” That’s unsurprising, given that the institution is known for alumni like Damien Hirst and Sarah Lucas, who work in mixed media. People questioned why she didn’t simply make a film or take a photograph of a pub, rather than toiling over a huge canvas of the same subject matter. She commented that photography and film have barriers such as contending with light, but that “you can have it all with painting.” Cognizant that trends like anti-painting can be “fashionable,” “flawed,” and “superficial,” she remained committed to painting. She did, however, take measures for her large painting of a pub to not “feel static” on the wall and to “be aware of its environment;” she coated the floor with beer and put French fries in the room in advance to create a pub-like odour that would have made Italian futurist Filippo Tommaso Marinetti proud for making art a multisensory experience that could border on irritating. Exasperatingly, in her second year, painting made a comeback and her classmates took up the medium with great fanfare.

Richardson’s work is often compared to that of Peter Doig, which is fitting because he also spent time in the UK and that experience impacted his landscapes of Canada (where he spent much of his youth). A summer visit back home between Richardson’s two years of study caused her to reflect on her Canadian identity, especially in the context of outdoor leisure. Landscape has shifted from something to conquer for survival to something to conquer for fun. She pointed out that it has also become a backdrop to leisure, as if a theatre set. She had long been interested in the Canadian habit of staying at a cottage, but her “whole world changed” when she took a spontaneous floatplane ride above a lake in the Kawarthas. She realized that “the machine you are in mediates your experience.” Upon returning to Goldsmiths, she painted objects like powerboats, chairlifts, and helicopters, all in majestic settings that feel somewhat magical with intense colours and twinkling lights. She identifies a gaze unique to the modern/postmodern/post-post-modern era: “The machine is made to be looked at” and “it’s aware of its being-looked-at-ness.” On the surface of these works, she has affixed decals to assert the “unique identity” of the machines. They double as reminders of the flatness of the canvas, emphasizing the materiality of the work. To return to the concept of the gaze, these decals remind me of accessories like necklaces or headscarves in 19th Century Orientalist images that reinforce the romanticism of the setting and draw attention to the figures’ nudity or partial nudity. She coated the edges of each work with fluorescent paint and tilted them on gallery walls to catch the overhead lighting and appear electronically lit. If there’s an afterlife, Piet Mondrian—who was obsessed with electric lighting and mimicking it with paint—must be smiling in response. As was the audience.