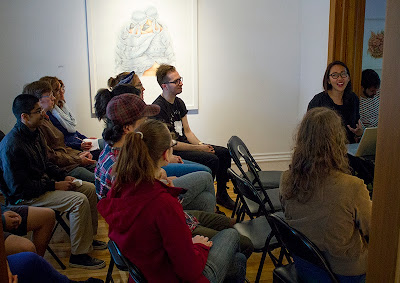 At the end of Winnie Truong’s artist talk at Line Gallery (North Bay, ON) on May 16, I asked how far back her interest in hair—her dominant subject—went. She shared that as a child, she drew princesses and girls playing tennis, and they invariably had long, flowing hair. Somehow, she got sidetracked from drawing, even though she filled many a sketchbook and “grew up on Edward Gorey.”

At OCADU, where Truong earned her BFA in 2010, she majored in drawing and painting, with her thesis in painting. She felt “forced into…the tradition of oil painting,” which may account for her assessment of her thesis as being “really contrived.” When professor Luke Painter challenged her to transform a black and white sketchbook drawing into colour and on a grand scale, she bristled. Ultimately, though, she felt liberated and “completely abandoned painting.” Today, she works in pencil crayon, “a juvenile tool we’ve all used. It’s not [used to create] painting or sculpture, which were historically revered.” She gets a kick out of contributing to drawing’s status as an “elevated medium,” whether through the international exhibition of her drawings, or through high-profile commissions for publications like The New York Times, both of which have allowed her to work full-time in her Toronto studio.

When her work is installed, she imagines the figures as representing a “tête à tête à tête” through imagined dialogue with one other. “The figure is almost secondary,” she says. Hair has been a constant focus, as her traditional portraits with a twist (like bearded ladies) morphed into dual-face portraits and recently, skulls. She sees hair as personal expression and also as a universal concern. She favours a palette of cotton-candy-like pinks and blues, and notes that these colours used to seem fantastical but are now commonplace; in fact, after the talk, I walked along the boardwalk and spotted a young woman whose hair transitioned from purple to pink. The unnatural quality of these colours prevents her from referencing a particular race or culture, Truong explains. Consequently, they have an “alien” quality and present “as their own species or genus.” Generally speaking, she likes her drawings to reveal “biological possibilities.” Their ambiguity stems from her self-conscience as much as it does from hair and fashion magazines, giving her work a purposefully surreal quality. Situated in a “vacuum of white space,” the figures appear “excised from reality.” 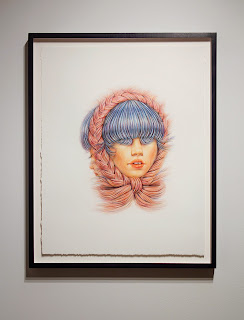 Her tendency to use the colours associated with boys and girls is of particular interest to me because of my own practice. Even though she acknowledged that her work touches on gender, I can’t help but indulge a more involved gendered reading. To me, these luscious images evoke the sexual power of hair that goes back to Biblical times and the female tradition of brushing one’s hair 100 times a day from the pre-Victorian era. She reveals that the figures are meant to be ambivalent—they are simultaneously beautiful and ugly. When hair is coiffed, Truong says, it is attractive, but a wig in the gutter in the club district is “menacing” and “disgusting.” She activates this tension in her work. By way of example, she describes a drawing in which a “woman [is] completely wrapped in this duvet of hair,” giving the effect of comfort and constraint in equal measure.

She describes her “crazy line work” as “really obsessive.” She says, “It’s such a labour of love…I still find it very exciting.” The process of making pastel colour studies; determining optical mixing with her old iPhone; applying hair after hair as marks on the page; and using an electric eraser to create highlights has become more repetitive over time and also more meditative. Drawing is “an exercise in relaxation.” At the same time, Truong revels in its tension, recalling her embrace of ambivalent subject matter. For instance, she notes that drawing is vulnerable to damage with something as simple as a kink, reminding me of artist Dana Schutz describing drawing in Roger White’s The Contemporaries (Bloomsbury, 2015) as, “You’re going along, and then you make a move and the whole thing is destroyed” (p. 122).

Truong’s exhibition, Comfort Objects and Other Attractions, was on show at Line Gallery from April 11 to May 15.