Since the massacre at Charleston’s Emanuel African Methodist Episcopal Church, I have been finding it difficult to feel optimistic about social justice, in both a general sense and in terms of racism in particular. It is perhaps fortuitous that I am behind schedule in writing about the keynote speakers for the Dream Big conference (May 27-30) in North Bay, because much of the discussion focused on advocacy for marginalized groups.

Yesterday in Detroit, I spotted the following mural with a helpful message by Father Greg Boyle: “At some point, we forgot that we all belong to each other.” 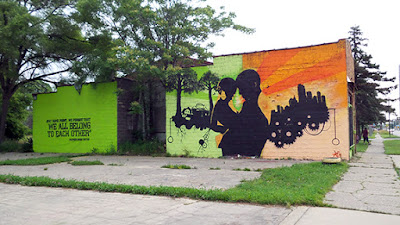 The text and mother-child image caused me to think back to the keynotes and how they all addressed their youth. charles c. smith, a “poet, organizer, change agent,…iconoclast” who teaches at the University of Toronto, recalled being “very aware” that he was the only black kid in his class. Lee Maracle of the Sto:Loh nation, who is an instructor at the University of Toronto and a recent recipient of the Ontario Premier’s Award for Excellence in the Arts, did not learn to read until age 9 and as a result of the residential school system, she visited the hospital often for malnutrition. Kent Monkman, an internationally exhibiting queer artist who is also known as Miss Chief (his “very glamorous” alter ego), recounted what it was like to grow up in Winnipeg, where “the harsher reality of First Nations people coming out of the colonialism process” was apparent. Multidisciplinary artist Paul Walty was a child of the postwar boom and as a result, grew up an “optimist of sorts.” He didn’t grow up marginalized, but he embraced diversity as an adult by learning French and immersing himself in the Francophone community, including a current term as president of the arts organization BRAVO. He feels that monolingualism limits tolerance.

The location of the conference in a city of 53,651 that I’m proud to call home, gave a geographic focus to the theme of dreaming big. Walty addressed this most directly, stressing that artists should not see cities as the only sites for creativity; he sees cities as lodestones and is nourished by the hinterlands, he said. Maracle emphasized that the arts are a source of economic vitality for cultural centres, with an excellent return on investments. Value can’t be assessed in economic terms alone, though, evident in her example of the healing value of art for social change, with singing in canoes reducing alcoholism. She explained that in “difficult circumstances…you come to love it [art] more than the world the way it is.” She added that the job market is in flux, making creativity vital. Monkman spoke similarly about the need for adaptability. He said that First Nations culture was “never static” and dreaming big was how it survived. smith spoke of the importance of redressing “historically entrenched inequities,” broadening the “narrow Eurocentric view,” and seeking reparations for injustice.

The need to dream big is easy to see, but it’s less easy to implement.

smith shared that jazz and science fiction opened doorways into a “very hostile white world,” but helped him understand himself. In black aesthetics, he explained, a “radically different view of ourselves” is postulated. The disparity between the view from within and without is underscored in an example he gave of a recent study by Wolf Brown, which revealed that the funding black people receive is out of proportion with their active involvement in the arts.

Walty realized that he wasn’t suited to his vocation of archaeology, so he turned to drawing, finding a way to retain elements of his background such as the grid. He was told by gallerists that drawings lack presence, so he made his black and white figurative drawings large enough to fill galleries floor to ceiling so their presence could not be denied. He didn’t depend solely on galleries; he had shows in people’s apartments and houses and hired buses to transport guests there.

Monkman wanted to make “the language of painting something that belongs to a Cree person.” Ultimately, he phased out the Cree text from his work and expanded his goal to empower two-spirited people. He created large paintings of romantic landscapes, subverting tradition by including Miss Chief in them. They function as an alternative to Eurocentric art with its “very one-sided point of view of the history of North America.” His work became censored at the Royal Ontario--in the First People’s Gallery of all places--where it was intended to be in dialogue with Paul Kane’s work. It was “too hot a topic, too hot a button,” he said. 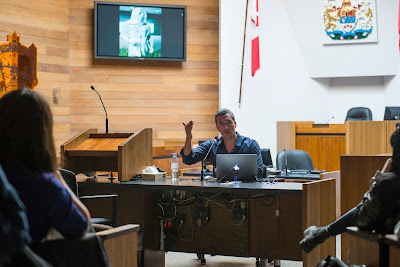 Maracle wrote her autobiography and was told by a publisher, “Indians can’t read.” She took to the streets to ask Aboriginal people if they would read the book if she taught them to read. After gathering signatures from 3,500 people—which would constitute a best-seller—she approached Frontier College to provide literacy tutoring and got a book deal for Bobbie Lee, Indian Rebel from Women’s Press in Toronto.

So, how should we dream? Maracle said that when people ask her, she says, “Just dream!” She notes that dreaming big costs money but many artists are impoverished. It doesn’t take a lot to encourage creativity and care for burgeoning artists. She recalled visiting a bindery in Vancouver regularly with her children to gather discarded paper for projects; a Portuguese baker on the same block would offer them doughnuts. There’s a misconception, she says, that starving artists spurs their creativity, so we need to urge “Canada to dream big with us and put some money where our mouths are.”

smith called for a more united front, with more gatherings like Dream Big. That requires access to resources, he pointed out, which is something to be conscious of as the Canada Council for the Arts restructures its funding model. We need to support artist-run centres, like White Water Gallery, which organized Dream Big. Monkman stated that artist-run centres were where his work gained traction, and this support was “very important” to him. Walty spoke of the creative spark he has experienced in group residencies organized by Galerie du Nouvel Ontario, an artist-run centre in Sudbury, including Art en movement, which I blogged about in 2012. He considers ARCs to be “the research and development arm of art.” If these types of institutions lose funding, he commented, “we are [effectively] saying the past isn’t worth anything.” Defunding them would be unwise and destroy the community, he said.

As I was wrapping up this post, CBC Radio was on, with Carol Off quoting Senator John Matthew's tweet, “Removing #ConfederateFlag w/out changing hearts and minds will not get rid of racism” (1). It made me think back to something Maracle said: “We make very quiet revolutions, artists, revolutions of the heart.” She elaborated that she has seen revolutions turn violent, and what we need is to change hearts. The Dream Big conference reminded me that art has the power to do just that.