Laurie Simmons at the Jewish Museum


Sarah Thornton, “Canada’s hippest academic” (1) stated in her talk at the Royal Ontario Museum (Toronto) last fall that artists’ freedoms intensified with Duchamp’s urinal sculpture, Fountain (1917). In its wake, “contemporary art made belief a central concern”—belief that an object is art because the artist says so, and that the artist has the authority to say so. Thornton elaborated that maintaining that authority is not easy, and branding is key.

Laurie Simmons, about whom Thornton writes in the book, 33 Artists in 3 Acts (Norton & Company, 2014), has always addressed belief in one way or another. She has been photographing constructed realities, such as dollhouse interiors, throughout her career. Recently, her attention has turned to life-size Japanese sex dolls, cosplay, and Doll Girls. In the latter subculture, which is the focus of How We See, her current exhibition at the Jewish Museum in Manhattan, young women assume dolls’ attributes in social media selfies and vie for celebrity status.

The way I see it is that belief in the artist’s skill is paramount. The viewer must believe that what is presented in the gallery has greater cultural worth than image search results on the Internet for ‘Doll Girls.’ Otherwise, why pay admission? Pristinely printed 70 x 48” images that tower over the viewer and command attention in an ornate room certainly fit the bill. 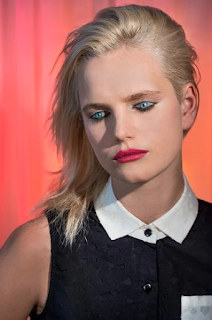 Simmons’ head and shoulder portraits feature models with eyes drawn on their lids. Eyelashes are drawn above, and in one work, they are even affixed. With the lids closed, the upper lashes thicken and accentuate the lower lashes. As a security guard mentioned when I struck up a brief conversation, many people do not immediately notice this trickery. In fact, when I was there, one visitor was most concerned with comparing a model to Miley Cyrus. Only in person is it evident that the texture of the eyelids mimics canvas as much as it looks like skin. On occasion, there is evidence of the artist’s hand (2) on the lid, such as a slight angle interrupting the smooth curve of the iris, acting as a clue to this intervention. I like that she has also lined the models’ lips, which I have always found to be a bizarre strategy. In a way, it calls the larger world of cosmetics into question, rather than just the Doll Girls subculture.

Simmons’ interest in beautification is longstanding. Thornton writes that as a child, Simmons had memorized the names of lipstick and nail polish colours. Perhaps it’s because I have Thornton on my mind, but Simmons’ work strikes me as something of a sociological survey, in that judgment seems to be withheld in the depiction of the Doll Girls. This may be because Simmons doesn’t consider herself to be an ardent feminist (for more on this, see my post on this blog from October 2010 about her artist talk at the International Center of Photography). I’m aware that I’m projecting my own feminist values when I see elements of the women’s white clothing (3), such as the word ‘no’ on the collar, as signs of protest.

In the arc of art history, rationally, the portraits shouldn’t feel disturbing. A connection could be made to ancient white marble statues that appeared to have blank eyes, but which we now know were painted in polychrome. In Western painting, there is a long tradition of women not meeting the viewer’s objectifying gaze. Early daguerreotypes featured subjects with their eyes closed because of the dreadfully long exposure time needed. And then came the surrealists, who were fascinated by the act of sleeping and capturing it in images. All the same, Simmons’ six portraits read as disturbing. Maybe it’s that their vacant stares make them feel like robots. Maybe it’s that they have warm backgrounds in colours reminiscent of lava lamps, underscoring a sense of artificiality. Maybe it’s that Simmons, who I think of as giving life to the inanimate, has stolen some of the figures’ humanity and their dignity seems not to have suffered.

How We See made headlines when fellow Pictures Generation colleague Richard Prince nabbed one of Simmons’ images from her popular Instagram account, printed it and exhibited it as his own (as is his way). This brings us back to Duchamp’s urinal. Given that the original was lost, is Alfred Stieglitz’s documentation or the replica any less believable as Fountain than the original?

The exhibition end date has been extended to August 16.