The final presentation by the final speaker in the forensics-themed Canadian Art Encounters: International Artists Series took place on December 11 at Innis College, University of Toronto. Initially—as my campus’ post-strike return-to-class schedule was being negotiated—it looked like catching Taryn Simon’s sold out talk would mean taking an overnight bus from my alma mater to my current institution to get back in time to deliver an art history lecture. Even though that didn’t transpire, the effort would have been worthwhile and apropos, to hear from an artist whose work resists simplicity. Each series typically takes Simon four years to prepare and produce, resulting in piles and filing cabinets of paperwork, such as records of correspondence stemming from extensive negotiations with stakeholders. “It’s not fun,” she said flat out, when asked a leading question about enjoying the archiving impulse.

Though thought of as a photographer, Simon sees her work as anchored in photography, text, design, video and most recently, performance. The range of the New York-based artist’s collaborators/subjects are as impressive as the international scope of her exhibition record at age 40: she partnered with the late programmer Aaron Schwartz in creating imageatlas.org to explore the “idea of a universal visual language” that reveals how concepts present in different countries; she has photographed Pussy Riot members, Masha Alekhina and Nadya Tolokonnikova, for Vogue; she has taken portraits of Indian men who are very much alive but who have been declared dead to change the outcome of land inheritance; she has photographed Americans who were wrongfully convicted, usually by misidentification, in poignant settings like the place of arrest or the alibi location; and she has documented art and confiscated goods at the CIA and US Customs at JFK Airport, respectively. It’s no wonder Jill Birch, CEO and publisher of Canadian Art introduced Simon as “the ultimate disruptor.” As Salman Rushdie writes in relation to Simon, “one of the arts of great photography is to get yourself into the place” where “dangers—physical, intellectual, even moral—may await.”(1) The occasional impenetrable barrier underscores how amazing it is to have broken through so many other barriers. Simon shared that she was unable to convince Disney to allow her to photograph “all the ugly innards of the city” like holding cells and garbage being transported through tunnels. She admits that the rejection letter from them is better that any photo she could have taken, since it became fodder for her art.

Simon gave an overview of work featured in the new survey text, Rear Views, A Star-forming Nebula, and the Office of Foreign Propaganda: The Works of Taryn Simon (2015, Tate Publishing). She also spoke about an additional series, Paperwork, and the Will of Capital: An Account of Flora as Witness, which was shown in the 2015 Venice Biennale. The series is an example of her research process embracing tangents and her semiotics background coming to bear. Her starting point was researching George Sinclair, a horticulturalist interested in the survival of grasses. Then she ruminated on Egyptian burial practices; the present day flower industry of the Netherlands—the “Amazon of flowers,” where any flower is available anytime; and Dutch ‘impossible bouquets’ painted in the 17th Century over several months as each flower came into season. From there, she began looking at flower arrangements in the foreground of “nationalistic bombastic” photographs documenting the signing of contracts by the likes of President Ronald Reagan. She had the arrangements analyzed by professionals and recreated them, shooting them against the same background colour(s) as in the original scene. Simon describes the arrangements in her images as castrated, as “silent observers.” Also included are reproduced texts from the agreements as well as botanical pressings in a “race against time” to see if they will outlive the photographs. She observes that by revisiting contracts from the past, it’s possible to see initiatives that didn’t take hold, and conversely, to see roots of trends that remain strong today. 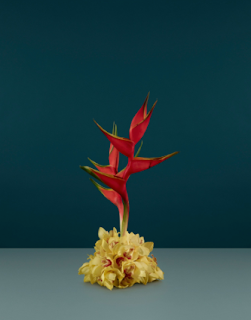 Simon observes that she is drawn to problems that don’t have a solution or an answer, to “something that keeps circling on itself” where there’s an “inarticulated noise…that moves in many directions.” While reflecting on all that she has exposed, from racial profiling to the smuggling of the date rape drug GBL to the dangers of nuclear waste to the cultural pressure for hymenoplasty to the inbreeding of animals to the systematic poisoning of animals to gallery censorship, I began feeling bewildered by society, and John Lennon’s “Happy Christmas” started going through my head. Here’s to attempting to “impose order on the bloody chaos of history,” as Rachel Donadio wrote of Simon earlier this year in the New York Times (2), to being a “valuable counterforce” as articulated by Birch, and to striving for a better world next year—if we want it.

If you missed Simon’s presentation, check out her TED Talk at https://www.ted.com/talks/taryn_simon_photographs_secret_sites?language=en.