Encouraging Literacy at the Museum of Contemporary Art Detroit

“Books belong to everyone.” ~ Debora Grace 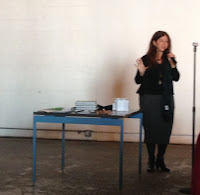 On January 23, MOCAD hosted its latest Art as Social Force panel. The moderator, Detroit-based Kim Kozlowski, provided an overview of her goal to make the city the global capital of Little Free Libraries (LFLs). She was joined by five area artists whose LFLs are on display in the MOCAD’s Mike Kelley Mobile Homestead in Little Library Originals: A Collision of Art, Literacy and Community from January 15 to April 24. The panelists were Barbara Barefield, Kelly O’Hara, Ndubisi Okoye, Eno Laget, and Debora Grace. Also included in the exhibition are Loretta Bradfield, Mary Fortuna, Jesse Kassel, Rashaun Rucker, John Sauve, Mitchell Schorr, Pam Shapiro, and Fatima Sow. Each artist’s contribution is unique, but the freestanding micro libraries tend to be painted in cheerful colours that invite readers to take a book/leave a book.

After installing an LFL in front of her own home, Kozlowski found that it sparked conversations among passersby—not just about reading, but about their lives. Inspired by the degree of interaction, she established Detroit Little Libraries, sought crowdfunding on her birthday, enlisted the help of local artists, and arranged for stewards to oversee basic maintenance. 150 LFLs were placed in various locations around the city—outside faith-based organizations, health care centres, and schools (ranging from elementary to college), to name a few. Areas with limited access to reading materials continue to be a high priority as more LFLs are installed. Ideally, the current amount will double before long.

Impressively, the city’s first LFL was made using reclaimed materials from local abandoned houses. Detroit is now experiencing “a lot of hope,” in Kozlowski’s opinion, making this a suitable time for the project. “It’s a very joyful thing to be involved in,” Kozlowski says.

There are challenges, like volunteers bowing out, exposure to the elements, vandalism, and book supplies becoming depleted because people encounter LFLs spontaneously or they lack the means to leave a book. At the same time, the success stories clearly outweigh the challenges. The mayor, the city, and countless citizens are supporters of the project.

Barbara Barefield is no stranger to the rejuvenating potential of the arts, having brought a musical series to Palmer Woods with her partner. Although she hadn’t painted in quite a while, she applied her graphic design skills in promoting musical performances to her LFL. Her intention was to capture the magic of reading that she experienced as a child. She believes reading is how we foster language, creativity, and thinking. 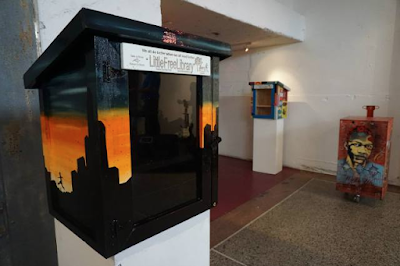 Kelly O’Hara is working on a graphic novel, so the integration of image and text has been on her mind for some time. In keeping with her style, she painted a silhouetted cityscape against a golden sky on her LFL (pictured in the foreground of the image above), with uplifting images like a child seemingly leaping over rooftops with superhero-like power. She noted that the project was a great way to give back to the community. "I said yes in a heartbeat," she said. 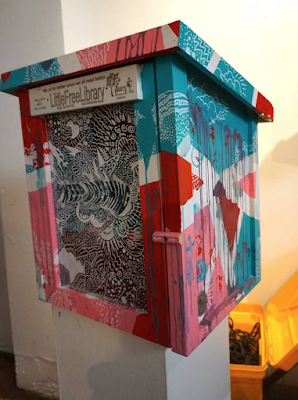 Art director Ndubisi Okoye is similarly excited to be involved. “I was all for it," he said, particularly in light of the city’s low literacy rate. “As a society, we need to be supportive of literacy,” he advised. His early work in graffiti laid the foundation for his amazing energetic lines on the glass door of his LFL (shown above), which brings Keith Haring to mind. In the centre of the dizzying patterning is the grounded message, “keep dreaming,” a mantra from his personal life.

Eno Laget, referring to the city’s challenges, said, “We all know something’s wrong.” He shared that 47% of adults are functionally illiterate*. He hopes that LFLs can represent the “beginning of conversations to break down barriers.” When asked to participate, the street artist said, “I was all about it.” He pointed out that there is an extensive history of Detroit artists using found objects, which lends itself to the LFL project. In his case, he painted on a donated newspaper box, making for a coincidental tie-in to his background in the publishing industry.

Debora Grace said she “couldn't think of a better way to...build Detroit back up” than creating a LFL. She read frequently to her children, and when she was a child, her mother joked that she ate books because she read voraciously. Reading is “like swallowing universes,” she says. People need to “learn to get cozy with books,” she believes, because they carve out a path for the future. To reinforce this connection, on her LFL, she depicted W.E.B. Dubois, the first African American PhD graduate from Harvard (incidentally, I love that Harvard College Library highlights facts like this). Grace believes that reading is a “major game-changer,” demonstrated by the fact that sources of inspiration like songs, films and religious texts all start with the written word. “Books belong to everyone,” she insists. Given her pursuit of education as a vocation, she is bound to inspire many a reader.

If you can’t make it to the exhibition, check out Kozlowski’s tour on YouTube.

To learn more about Little Free Libraries, please see my Artist in Transit post from November, 2012 (http://artistintransit.blogspot.ca/2011/12/big-thumbs-up-for-little-free-library.html) or the Little Free Library website.

Images of O’Hara and Okoye’s LFLs are from http://detroitlittlelibraries.org/art-literacy-community/
Posted by Heather Saunders at 10:51 AM