“Navel-gazing is absent from this heartfelt memoir.” 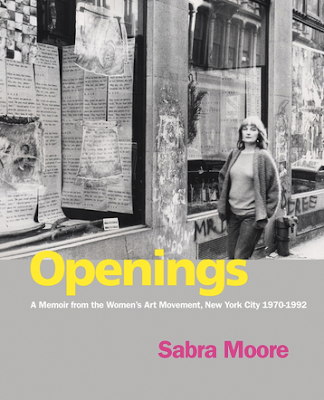 Sabra Moore’s Openings: A Memoir from the Women’s Art Movement, New York City 1970-1992 (New Village Press, 2016) describes the Texas-born artist’s experiences in Manhattan and Brooklyn back when moving there didn’t break the bank—back when artists could rent a huge loft and make a living by cobbling together small contracts with plenty of time remaining for art-making and activism to boot.

Naysayers may doubt that activism was necessary beyond the surge of Second Wave feminism in the 1960s and 1970s. Drawing on journals written since 1964, Moore provides ample evidence of lasting sexism. For example, in the 1980s, Moore visited Frida Kahlo’s house in Mexico City and noticed that the only postcards for sale featured the works of Kalho’s husband, Diego Rivera. That same decade—in the wake of Ana Mendieta’s suspicious death after falling from the 34th window of the apartment she shared with her partner, Carl Andre—a male architect “jokingly offered to push me [Moore] out of a window when we disagreed.” (1) And, in the 1990s, a friend of Moore’s, Ora Lerman, was on an art-related academic panel in which the male panelists were paid honoraria but the female panelists weren’t compensated.

Navel-gazing is absent from this heartfelt memoir. Moore, an accomplished artist, discusses her own mixed media work throughout, but with seeming sincerity, by showing how it dovetailed with her personal life, from travel to family relations. For example, in a fabric calendar, Moore recounts her abortion while volunteering for the Peace Corps, using materials and techniques familiar to her because both of her grandmothers had been quiltmakers. Impressively, Moore includes people’s reactions to her work—both compliments and criticisms—and she reveals rejections as well as acceptances for exhibition submissions and grant proposals. This dose of realism is important for art students and emerging artists because it underscores the need to be steadfast. Signs of her success are tempered; for example, in a single paragraph, Moore recalls the good news that a curator offers unlimited funds for one of her artist books, but also the less-than-good news that the Social Science Research Council wants a book from the same edition at no cost. As the late Carrie Fisher remarked, “There is no point at which you can say, ‘Well, I’m successful now. I might as well take a nap.’” (2)

Moore’s inclusiveness of other Second Wave feminist artists is exemplary. She aims to expand the canon beyond a smattering of well-known female artists like Judy Chicago. As early as the 1970s, Moore realized, “If you are not named, you do not exist” (3). She doesn’t just mention her myriad colleagues by name; she describes their work, at minimum with a single sentence, but often with more. For example, she writes poetically of Hannah Wilke’s Brushstrokes No. 6 that preceded her death from cancer: “Rows of her shorn lockets [of hair] were framed like calligraphy, creating a text we could not decipher except for its bravery.” (4) The reader need not visualize the majority of the works referenced: a colour banner of images spans the bottom quarter of the page for the entire book, except when full-page images are included.

One perspective in the contemporary art world is that it is questionable for a curator to organize an exhibition that includes his or her own work, but Moore offers a compelling argument for organizers to double as participants. Basically, joining forces was the best strategy for making headway. She identifies as an activist artist, as a practitioner “who felt a call to action for our beliefs.” (5) That call manifested in various ways for feminists: organizing shows around themes like peace, founding artist-run galleries like Atlantic Gallery, and establishing artist-run periodicals like Heresies. Moore’s work was featured in all of these initiatives.

Moore does not gloss over the trials and tribulations of collective organizing. She cites challenges such as the horizontal structure of grassroots organizing delaying decision making; a revolving door of members hindering the ability to move beyond surface level concerns; poor institutional memory; lack of credit for behind-the-scenes work; a heavy reliance on unpaid labour; in-fighting; and financial mismanagement that could cripple a fledgling organization. Yet, in the end, collective action seems to have been worthwhile. Moore portrays it as an almost transcendental experience that fostered her creative practice, broke down institutional barriers, and facilitated lasting friendships with the likes of art critic Lucy Lippard (who has written an introduction for Openings along with poet Margaret Randall).

There is a wealth of valuable information within for researchers. Unfortunately, the presentation of information demands deduction. Artists are often referred to by their first name only; for example, in the second paragraph of the preface, Moore introduces three artists by first name only and by the end of the preface, just one of those three has had their last name specified. Especially for readers who don’t read cover to cover, a subject index would clarify an individual’s last name, plus it would enhance access overall. Also, the content is presented somewhat chronologically, but the sequence of events is often jumbled. For example, the first chapter is called, “Where I/We Came In (Starting in 1970),” but she actually begins in the 1960s (in order, 1966, 1969, 1963, 1970, 1982, 1972, 1973, 1984, 1983, and 1965). Jumping around from year to year is preferable to not knowing what year Moore is referencing. For instance, early in the book, Moore says she was married in the late 1980s. Much later, she notes the month and day of her wedding but not the year, and on the next page, an approximate date of 1989 is indicated by her reproduction of an exhibition card. However, in a later chapter, she reveals her wedding was 32 years after her sister’s in 1958, which would be 1990 and not the late 1980s. Another way the reader gets lost is through the absence (or rather, delay) of segues; for example, she mentions that a colleague of hers, Linda Peer, got married while placing her and her husband-to-be‘s hands on a book about the artist Giotto. Then she describes how she met Peer and she describes her personality. The next paragraph is about Moore’s trip to Europe, but only in the final sentence does she mention Giotto as the link to the previous paragraph. Also disorienting is the inclusion of dialogue without the identification of all speakers. For instance, Moore recounts her introduction of the artist Vivian Browne to the anthropologist Jonetta Cole. The three stand looking at Browne’s work. She then writes, “‘Does it make a difference that it’s women? It makes a difference!’” (6) The first question is assumed to have been asked by Cole, but is the response from Browne or from Moore, or is Cole answering her own question? Lastly, as a Canadian I would like to see more specificity with her reference to Reconstruction Project, an exhibition that traveled from Powerhouse Gallery (now La Centrale Galerie Powerhouse) in Montreal to Eye Level Gallery in Halifax in 1987. The caption for an installation view says merely, “Canadian installations” (the clarification of the gallery is only to be found in the illustration notes in the back of the book), and one quotation about artist-run centres is attributed generically to “the Canadians.” (7) Incidentally, no, I don’t know Bob from Calgary. (8)

No editor is listed in the book’s bibliographic information. Surely enlisting the help of one would have addressed the above issues. Marilyn Lanfear’s comment is pertinent, even though it is about Moore’s text-based art and not her writing: “You don’t make it easy to read your stories.” Moore’s retort was, “People have to want to read them.” (9) Personally, I enjoyed the memoir most when I read it quickly instead of searching for connections or clarity.

Reading the epilogue was like pulling a thread even though it’s obviously intended to tie up loose ends. In Moore’s updates about her colleagues’ current activities, I was surprised to see that Howardena Pindell is teaching art at SUNY Purchase, whose faculty I follow closely because it’s my former workplace. I am quite certain that it’s the Stony Brook campus she works at instead. A factual error like this casts doubt on the accuracy of all preceding content, so I recommend that researchers who consult Openings as a primary source document corroborate details with an additional source.