“...Ukeles prompts us to critique ourselves...”

For quite some time, I’ve been meaning to write about Mierle Laderman Ukeles: Maintenance Art at the Queens Museum (Sept. 18 2016 to Feb. 19 2017). However, with being appointed Director of the Ingalls Library at the Cleveland Museum of Art, I’ve been sidetracked by the visa process, packing, seeking accommodations, etc. (the mundanity of which makes me think of Ukeles, who highlights labor and everyday concerns in her work). One of many appealing aspects of the CMA for me personally is its founding mission to serve all people, demonstrated by temporary initiatives like partnering with public transit during last year’s centennial celebrations as well as the ongoing policy of free admission. Thus, I was duly impressed that the Queens Museum offered free admission to current and past employees of the New York Department of Sanitation and their families for the duration of Ukeles’ retrospective. 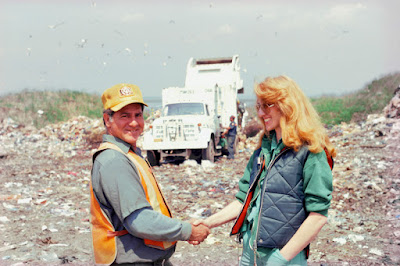 The connection to the Department of Sanitation is that Ukeles has been artist in residence there for almost 40 years. She is perhaps best known for a performance coordinated with them, involving all the “sanmen” in New York City. A dot matrix printout at the Queens Museum conveys her intent with this pivotal work, Touch Sanitation (1979-80): “For eleven months, I circled the city to face and shake hands with, and thank every sanitation worker, hoping to create a vision of the[ir] endless work energy...” Works like this or her ‘ballets’—which feature heavy machinery moving like synchronized swimmers (diggers bow to the audience!)—might seem merely celebratory in isolation. However, Ukeles has also exposed society’s dismissive attitude towards sanitation workers, making her exploration more nuanced. Initially on a gallery window and later at the Queens Museum via archival material, she shared a selection of derogatory comments sanitation workers had been on the receiving end of, including racial slurs, curse words, class-based slights, and comparisons of sanitation workers to refuse. She looks at the labor of not just sanitation workers, but also of other undervalued laborers like museum security guards and mothers. Ultimately, Ukeles prompts us to critique ourselves, and since society is slow to move beyond stereotypes, it gives her work a timeless quality (especially now, with frequent discussions about classism in the US). From a contemporary perspective, this evaluation of the self and of society is more unsettling than reconsidering what constitutes art. As context, in her 1969 manifesto, she committed to highlighting unglorified activities—many of them household chores—and “flush[ing] them up to consciousness, [by] exhibit[ing] them, as Art.” (1) Perhaps unsurprisingly, she thought of Marcel Duchamp as a grandfather. (2)

The exhibition, curated by Larissa Harris and Patricia C. Phillips, features works from 1962 to 2016 and is the first show of its size at the museum. Much has been written about this riveting exhibition, so I’ll focus on her early feminist work. 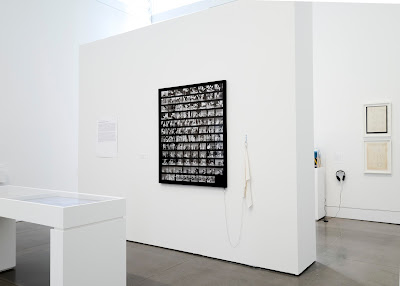 In the spirit of social realist photography, Ukeles used the camera to underscore the challenges of being a mother and an artist. And, as many feminist artists did, she turned the lens on herself to embrace the personal as political. Another contemporary spin on social realism was adding a performative element that evolved into participatory art. The series entitled matter-of-factly, Dressing to Go Out/Undressing to Go In (1973), documents the artist assisting her children; significantly, Ukeles is cropped partly or completely out of many of the images, referencing the invisible nature of much of mothering labor. Maintenance Art: Personal Time Studies (1973), meanwhile, shows how integrated mothering is with art-making: in this textual record of Ukeles’ daily activities, like a pendulum swinging, she describes her child’s bowel movement, then turns her attention to a woodcut, then nurses her child, then chooses an image for an exhibition catalogue, and then visits the playground. The boundary between her art about domestic labor and her art about sanitation is sometimes blurred. For instance, in Maintenance Art Event XI: “Washing” (1974), the act of her cleaning the sidewalk outside of the feminist gallery, A.I.R., then based in Manhattan, alludes to the tendency for women to do the lion’s share of housework in that era as much as it references the act of keeping public spaces clean. In all of the documentation images of this performance, her poses are utilitarian instead of distorted for male pleasure, and in shots containing male onlookers, they appear to be transfixed by her labor rather than her body. These images contrast how women had been objectified traditionally in art, yet an element of inequality lurks because of her laboring amidst those who are at rest. Similarly, in one of the images from Washing/ Tracks/ Maintenance: Inside (1973), she scrubs the floors of the Wadsworth Atheneum in Hartford, Connecticut on all fours, at the base of an ancient marble statue of a female nude (Venus with Nymph and Satyr by Pietro Francavilla, 1600), juxtaposing realism and idealism; the nude Venus figure clutches fabric to create a pleasant effect of drapery pulled across her figure, while Ukeles, dressed in a simple t-shirt and pants, clutches a cloth to clean the floor. Ukeles is not fetishizing labor, Helen Molesworth clarifies (3), similar to her avoidance of mere celebration in her ballets and Touch Sanitation. 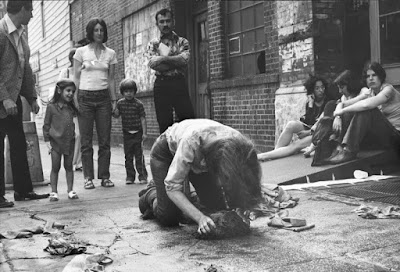 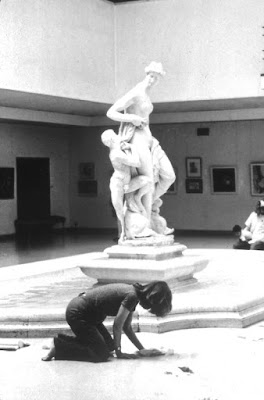 The catalogue, published by DelMonico Books·Prestel, contains an introduction by Laura Raicovich (President and Executive Director, Queens Museum) as well as essays by both of the curators and Lucy R. Lippard (who curated Ukeles into an important conceptual art exhibition in 1973, c. 7, 500), plus interviews by Tom Finkenpearl (past President and Executive Director, Queens Museum) with the Department of Sanitation commissioners. Also included are writings by Ukeles, a selected work history, selected bibliography, and a wide assortment of high quality images.