“...we are powerful together.” ~ Navid Tavoli 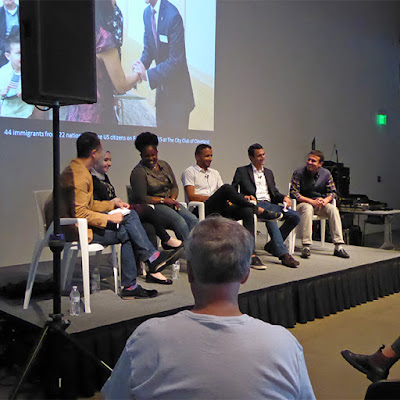 On Sunday September 17, the Museum of Contemporary Art Cleveland hosted the first in a four-part series of For Freedoms town halls. Each of the town halls will focus on one of President Roosevelt’s inalienable rights* and this particular one explored freedom from fear through the lens of immigrants’ experiences. Panelists onstage included Leen Midani, who is originally from Syria; Glory Bisett, who is originally from the Congo; Hany ElHibir, who was born in Kuwait and who lived in multiple countries before the US; Navid Tavoli, who is originally from Iran; and Murat Gurer, who is originally from Turkey. Panelist Abraham Cruzvillegas, who hails from Mexico, was seated front row center in the audience. Jorge Sanchez, who immigrated from Colombia, was the moderator.

For Freedoms bills itself as the “first ever artist-run Super PAC.” It is the brainchild of artists, Hank Willis Thomas (who introduced Sunday’s town hall along with Dan Moulthrop of the City Club, a partner for the event) and Eric Gottesman. The approach, called the Question Bridge—which Thomas introduced at a discussion involving African American men at the Cleveland Museum of Art (shout out to my new workplace!)—involves only taking questions from audience members who identify directly with the main speakers. At the MOCA, those who didn’t self-identify as immigrants were asked to refrain from asking questions. When trying to decide whether to attend the event, I mulled over the approach. I will admit to having felt a slight pang. I thought, “But I’ve volunteered with immigrants. What if I had something to contribute?”. However, reflecting on the television show, Dear White People, whose main character is a captivating radio host, I could see that having the mic completely out of the hands of those in power can be eye-opening, and that the Question Bridge was a reasonable way to subvert marginalization.

There was a time lag before I realized that I am more immigrant than non-immigrant, because I live in the US on a non-immigrant visa that can entail the intent to immigrate. That I didn’t realize my own arguable eligibility to participate in the discussion reveals my privilege (as a Caucasian person from Canada). I pass for an American and home is a day’s drive away. What do I know of being restricted by the Muslim ban, having a bystander not help during a medical crisis because of racism, or being a victim of war and trying to find forgiveness for sexual assault and murder—heartbreaking stories about which the panelists shared? Nothing. To say that I am immune to fear, though, would be inaccurate. Earlier this week, I had a dream that I was shot deliberately for my political beliefs. But dreams and waking life are apples and oranges; actually, an entirely new metaphor is needed because they are so disparate. Sanchez notes that that “picking one’s battles is a luxury.”

Thomas aims to “bring people together through what divides us.” It’s a noble goal, and the personal accounts shared by the panelists could melt the iciest of hearts, but only if they are heard. Midani says, “...we can’t run away from these topics,” but it seems that many people do just that, refusing to see that as Bisett says, “The US is for everybody.” Moulthrop recognized the value in having immigrants remind non-immigrants of fundamental rights. ElHibir shared an anecdote about not knowing which box to check on an immigration form to indicate his ethnicity, because he didn’t feel that any of them were the right fit; these are the types of details that someone who has lived here for a long time might not twig to without hearing it from a newcomer. Still, if the audience was filled with immigrants and pro-immigrant citizens, as I imagine was the case, does an event like this effectively preach to the converted? Gurer advised against “stay[ing] in your own corner and complain[ing].” Does an event like this perpetuate the corner or does it expand its reach by virtue of the institutional connection? MOCA Deputy Director, Megan Lykins Reich, spoke of providing a “safe space” for these discussions, to bring the community together. As Tavoli said, “...we are powerful together.” The content was raw, and I imagine there weren’t a lot of dry eyes in the audience, but there was certainly laughter, affirmative snapping, and applause in response to the panelists’ spirited determination.

Because For Freedoms has also conducted activities that dovetail more with the traditional programming of galleries, such as participating in exhibitions and performances, I found myself wondering if the role of art would surface in the discussion. Although it did not, I understand that this was addressed in a For Freedoms town hall that took place last November, three days before the federal election. At any rate, it got me thinking about the radical Marxist perspective that making art about social justice is too removed and that it’s preferable (probably too gentle of a term) to be an activist rather than an artist-activist. Degrees of removal have been on my mind since I wrote a catalog essay about the fable-inspired drawings of animals by Canadian artist, Amanda Burk, for her solo show at the Thunder Bay Art Gallery. The artist identified concerns with American politics as a motivating factor in her work, and I explored the connection head-on. Fables have been palatable historically because of their distance from the issue at hand, and there’s something to be said for using whatever tools will elicit a response. On the other hand, there’s also merit to dealing as directly as possible with a subject, even if the connection to an institution’s mandate might seem tenuous. Just as Sanchez emphasized that there is no right way to be an immigrant, there is no right way to be an artist.

*in addition to freedom from fear, these include freedom from want, freedom of speech and freedom of thought, conscience and religion
Posted by Heather Saunders at 8:56 PM