“Don’t leap to simple answers. Stick with it!” ~ Nell Painter

On January 20—the day following the crowded opening of Dana Schutz’s Eating Atom Bombs exhibition at the Transformation Station in Ohio City—the Cleveland Museum of Art hosted a discussion between the artist and Nell Painter. Schutz has ties to Cleveland as an alumna of the Cleveland Institute of Art. She is perhaps best known as the creator of the controversial work, Open Casket (2016), which is a posthumous portrait of 14-year-old, African American Emmett Till, whose 1955 murder inspired Rosa Parks’ civil rights activism shortly thereafter. A resident of Chicago, Till was abducted and lynched by white supremacists while visiting family in Mississippi because of his perceived flirtation with a white woman. Till’s mother wanted the world to see his battered body; JET magazine published images from the funeral home and temple and authorized reproduction in several publications that--like JET were geared to black readers. Schutz, who is white, based the portrait on JET’s documentation. 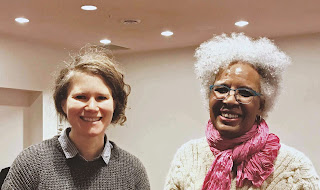 When Schutz was lambasted for the painting, she was defended by Painter, who is an artist, the author of The History of White People (W. W. Norton & Co., 2010), and the former director of Princeton University’s African American Studies program. Public protest began at the opening of the Whitney Biennial curated by Christopher Lew and Mia Locks when African American artist, Parker Bright, stood in front of Open Casket to prevent others from viewing it while wearing a t-shirt that said, “Black Death Spectacle.” Self-described mixed black artist Hannah Black then wrote an open letter signed by multiple artists, calling for the painting’s removal and destruction so that it would not enter the art market. (Schutz has clarified that this work from her personal collection is not for sale). Tension escalated on both sides, especially online, with Schutz’s email account being hacked and a falsified apology published online, and the hashtag #FreeDanaSchutz emerging.

The CMA event was Schutz’s first public appearance since the aftermath. CMA Director of Education and Academic Affairs, Cyra Levenson introduced the “historic conversation,” highlighting the museum’s commitment to providing a “safe and brave space” to engage with art and artists. Reto Thüring, co-curator of Eating Atom Bombs with Beau Rutland, emphasized the museum’s responsibility to present a forum to create dialogue, even if revisiting this “impassioned debate” is painful.

My motivation in summarizing this conversation is to provide a written record for research purposes, to contribute to our understanding of socialcultural evolution.

Painter and Schutz discussed another work in the biennial briefly, THE TIMES THAY AINT A CHANGING, FAST ENOUGH! (2017) by black artist, Henry Taylor, which depicts Philando Castile after being shot fatally by a Minnesota police officer at a traffic stop while reaching for his identification. Just as Painter pointed out that Taylor’s work is art and commentary, Schutz’s work falls into both categories. It follows that the controversy was two-fold: the fact that Schutz made the painting in the first place, and the manner in which she depicted Till’s visage.

Painter and Schutz debated the familiarity of the photographic image to the general public. Schutz commented that it has a large presence but Painter countered that the source photo “is not a huge document in the world,” though ironically, Schutz has given it a larger presence. Painter opined that in 1955, “what happened to black people wasn’t considered the news.”

Some criticism of Open Casket has been tied to assumptions about the truthfulness of photography. Painter, who has incorporated photos in her mixed media work about race and gender, questioned this association. She stated that photographs capture a moment or part of a moment, or a particular vantage point, but they aren’t the whole truth. Therefore, she is troubled by the charge that Schutz’s representation of Till is “somehow not true” because of its departure from the source through gestural abstraction. Schutz shared that she doesn’t look to paintings for historic truth. She mentioned Jacques Louis David as an example of artists deviating from reality. Although she didn’t have an opportunity to expand, David made numerous adjustments for his patron, Napoleon Bonaparte, like who was present for which historic events. This thread of the conversation led Schutz to assert that perhaps history painting is really about the present, which informs our understanding of the resonance of Open Casket.

Schutz shared that she almost didn’t make or exhibit the work in question. The artist, who often makes political paintings, explained that she painted Open Casket in the summer of 2016, when “you couldn’t believe the rhetoric” of federal politics. She elaborated that it was as if someone had turned over a rock, revealing disturbing power dynamics. “As a white person in America, you feel implicated,” she says, and this rawness made her feel connected to Till as a subject. Like CMA Assistant Director of Academic Outreach, Key Jo Lee, commented to me afterwards, “…whiteness as a category can never be invisible again” for as Painter noted, “In the US, everything happens in a racialized context.” Schutz did ask herself, “Who am I as an artist,” referring to her whiteness, but she felt that audiences “had to see that [image]” in the interest of justice and accountability. Whether the initial publication of the photographs functioned as acceptance of its future recirculation was considered in the conversation. Schutz felt spurred on by the fact that Till’s mother said that she wanted “‘all the world’ to witness the atrocity” (emphasis Schutz’s). (2) She also felt that the tragedy of “what was done to an innocent child in America” warranted that it “be...art.” However, Schutz felt that Till was an impossible subject. Because of the photographic documentation, in making what she considered a “double image,” she wondered, “Where do I begin?” Schutz is drawn to the seemingly impossible, though. She described the process of abstract painting as finding a subject through a haze. Because the reaction to Open Casket was extreme, Schutz mused, “Maybe no one should have made work in 2016.” Her impression was that in the US, the painting was shocking to white audiences and relatable to black audiences, but Painter cautioned against generalizing. Similarly, Painter advised the audience when interpreting Schutz’s work, “Don’t leap to simple answers. Stick with it!”

Painter stated, “We need more...knowledge” about African-descended artists, urging audience members to look at the catalog for the Tate Modern’s Soul of a Nation: Art in the Age of Black Power (available, incidentally, at the CMA’s Ingalls Library), reinforcing Schutz’s observation about the power of survey shows.

In an institution whose mission statement embraces all people, making space—literally—for critical conversations like this one that drew over 500 people will hopefully contribute to shifting the impression Painter had growing up of art museums: she recalls encountering one parasol painting after the next and seeing only “rich white people.”

Painter’s memoir, Old in Art School: A Memoir of Starting Over, is forthcoming from Counterpoint Press. Schutz’s exhibition at the Transformer Station continues until April 15, 2018.

(2) Ibid.: Mutilated face of victim was left un-retouched by mortician at mother's request. She said she wanted 'all the world' to witness the atrocity." 9. Photo: Schutz (l.) and Painter (r.). Courtesy of Key Jo Lee.
Posted by Heather Saunders at 3:21 PM