Our Anthropocene: Eco Crises at the Center for Book Arts


“...collect data ‘to demonstrate that you can.’” ~ Heidi Neilson 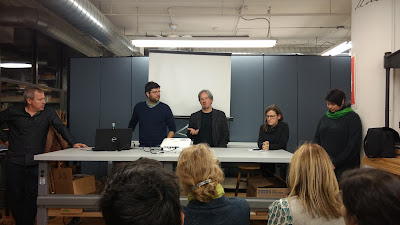 Nor’easter be damned, the roundtable discussion on March 2 at the Center for Book Arts in New York with artists Nuno Henrique, Heidi Neilson, Tara O’Brien, and Ian van Coller went on as planned. My windswept hair and soaked jeans proclaimed the power of the natural world—a fitting complement to the current exhibition and theme of the evening, Our Anthropocene: Eco Crises.

In the Latin-derived word, ‘anthropocene,’ the root meaning ‘human’ has elbowed its way to the front of ‘cene,’ which conveys geological time. Indeed, the current geological age known as the anthropocene is defined by humans, for better or for worse. The show’s curator, Gary van Wyk, commented, “There comes a point where it’s our presence that affects things,” citing as an example plastic on beaches that has become embedded in rock formations and created an unnatural hybrid. My mind flashed back to stones from an Italian beach that I pocketed in my twenties. I continue to be transfixed by the shards of rooftops from the cliffside wedged within, their rough edges smoothed over time to appear completely normal. When van Wyck shared his example, my souvenirs that travelled full-circle by being displayed back in my house struck me not as free but as representing a hidden cost.

Van Wyk cautioned the audience, “We’ve created an era that threatens our existence on planet Earth.” He identified a host of environmental issues that warrant our attention, from disappearing species to the contamination of the food supply. He observed that the poignancy of the works in the exhibition encourages the contemplation of environmental concerns. Executive director and Center for Book Arts curator Alexander Campos echoed this sentiment, stating that the works in the show have captivating power and tackle important issues, not to mention being “aesthetically wonderful.” Van Wyk added that given some politicians’ dismissive attitude about science, artists’ roles are especially important. Artists can interface with scientists to connect audiences to otherwise inaccessible concepts. Whether employing strategies like beauty or propaganda, van Wyk asserts that artists “can...have quite a substantial impact.”

When Philadelphia-based Tara O’Brien was asked if she felt hopeful about the environment, she replied that she tries to live responsibly, minimize her ecological footprint, and not think about it too much. In terms of the latter comment, she is actually incredibly thoughtful, having created powerful conceptual bookworks, which she shared with the audience. The exhibition features Documentation (2 Volumes) (2005), a book-like structure consisting of rectangular Plexiglas enclosures, intended for the planting of grass seeds. She mused that it would be terrible if the only way to experience grass were through a book. She elaborated that people should experience grass in various ways, like whistling with a blade between one’s thumbs. In Natural Elements, also from 2005, she exhibited an ice sculpture in the shape of a book. Once it melted, viewers could only take in the work as a pool of water. In making the work, she pondered how glaciers—for which the work is a metaphor—would be explained after they disappear entirely. As a book conservator, she witnesses decay and the power of intervention on a regular basis. She is particularly taken by old atlases, expressing fascination with the way people use to think and how they managed overall. “Today, we have science and still can’t figure out [so much],” she lamented. She wants viewers to reflect on “how much we need to work and take care of it [the natural world].” This impulse relates to her former vocation as an educator. Her experience teaching informed the creation of a book made from soap that was inscribed the words, “Knowledge is Power, Knowledge is Dangerous.” Chillingly (I say as a librarian), she offered viewers the opportunity to wash the words away. 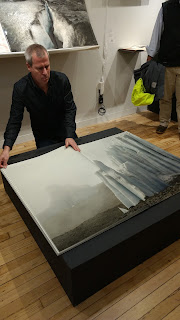 Ian van Coller has been “obsessed with books” since college, so it is not surprising that he became a book artist. The biggest book he has made, Kilimanjaro: The Last Glacier (Doring Press, 2017) which is 50 inches wide, is on display in the exhibition and is pictured here. With this folio size, he wanted to mimic the effect of visiting a glacier since many people will never witness one firsthand. Providing a version of that experience encourages people to care about the vulnerability of glaciers. The degree of melting “is truly astonishing,” van Coller says, “right before our eyes.” At Kilimanjaro, he predicts glaciers will be present for only another 30 years. When they are gone, “it will be such a loss.” He describes glaciers as “the ultimate archive” because they reveal change over time, much like trees and coral. Van Coller began his photography career working in portraiture and he brings that earlier focus to bear in Kilimanjaro: The Last Glacier. Interspersed with gorgeous photographs of glaciers are portraits of the native Tanzanian porters who carried travel gear—including a toilet—for himself and his scientist-collaborator, Douglas Hardy, up Mt. Kilimanjaro. Although based in Bozeman, Montana, van Coller was raised in South Africa, and his upbringing affected his experience of the racial dynamic. He felt uncomfortable because of the “very colonial” sensation of having people of color serving van Coller and Hardy, and he included their portraits to honor their work. Van Coller commented that art and science used to be strongly connected but now, science has become “very narrow.” He wants to help scientists—whom he sees as natural artists—become artists again. If the two groups seem distinct, consider that he sees them both as problem solvers.

New York-based Heidi Neilson stated that she wants to “connect planets and people.” Although it sounds like a lofty goal, she described exactly how she has delivered. For example, in 2007, she co-founded SP Weather Station with Natalie Campbell. From the rooftop of Flux Factory in Long Island City, this interdisciplinary project enabled visitors to collect weather data to supplement the institutional gathering of data. They offer related programming, like a fundraiser for an air quality monitor, with cheekily named items like Ozone Holes: Donuts for the Future. The project is an example of “citizen science,” which Neilson described as the prerogative of lay people to participate in research that becomes part of the scientific record. She wants to collect data “to demonstrate that you can.” Referring to Neilson’s work, van Wyck observed that there can be a performative component of activism. The work exhibited at the Center for Book Arts, Beachball Antennas (2016), is an example: Neilson “hit the beach” to interact with passersby, but not with typical beachballs. She “performed beach ball surgery” by adding antennae to receive weather data through HAM radio signals. Using weather-to-image software, she displayed the results on a laptop for visitors in what she described as pop-up installations. Her work demonstrates van Wyk’s stretching of the concept of artist books for the exhibition, which he mentioned in the introduction to the roundtable. Overall, though, her oeuvre relates to the print tradition. For instance, she commented that our storage of data has changed, as it used to be contained in books and is now primarily digital. This is a concept she has explored in works like Outernet Library Branch Wave Farm (2016), which included a single print book (about libraries), with the rest of the featured content being exclusively digital and decidedly outside of the Internet. The artist's website explains that https://outernet.is is "an expanding library collection of data broadcast from a network of satellites in space...[that] allows its users to participate in the selection of what it contains. An outernet library receiving station collects transmissions and stores files locally...[to be] accessed by witeless devices within range of the station." This intriguing work is relevant to the current threat to net neutrality.

Nuno Henrique, also a New York-based mixed media artist, has three works in Our Anthropocene. His work is rooted in his birthplace and previous home, Madeira Island in Portugal. He is fascinated by its history, such as the fact that the ancient forests managed to survive the ice age, but almost became extinct under colonial Spanish control in the 15th Century. Today, only a sliver exists. Henrique’s work is a retrospective archive of sorts, as he has made botanical drawings of numerous species from the forest, such as flowers and fruits, in addition to depicting subjects from the animal kingdom like snails. He emphasized that it “is important to create this memory” as a record of what is lost. He is especially interested in the island’s dragon trees (Dracaena draco), which became extinct after its sap was relied on for dye and medicine. Because his work is about obsolescence, he said, the tone is more elegiac than scientific, even though it is based on research. To reference the past, he has studied manuscripts and maps from atlases from the period of colonial control, and he uses older techniques like calligraphy. The harshness of the history of the forest contrasts the intricacy of his work, whether in calligraphy or in subtle contours delicately carved out of paper that underscores why he considers his artist books to be sculptural. Although he said, “our time will come” because scientists have warned it’s already too late, paradoxically, he remains hopeful that “there are solutions in science.” Since he calls the forest a “space for meditation,” it seems the answers may be contained there as well.