“...the poignant and the penultimate...” 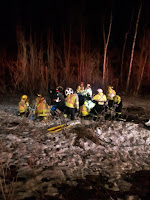 Before my near-fatal accident in the spring (shown here), the second last thing I did was attend Yayoi Kusama: Infinity Mirrors at the Art Gallery of Ontario with my sister (the last thing I did was have pizza with my husband and artist friends). And so it was that Kusama’s work became a visual marker for the last day my life felt normal.

Because humor is my default response to tragedy, in the hospital, I mused that I looked primed for a Kusama performance, with round electrodes dotting my torso. Of course, humor only takes one so far in recovery. My sister and I both wrote therapeutically about my brush with death and referenced the exhibition symbolically, though in different ways. What struck me as poignant was the sensation upon exiting each mirrored room, of infinity being curtailed against will. Simply put, I felt disappointed (distressed, even) to have to leave so soon. 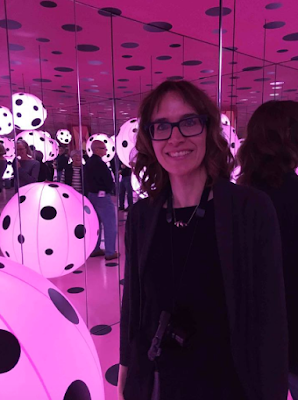 When I returned to work, the installation of Kusama’s touring show began the following day. I must be the only person who flinched habitually when walking past the artist’s large pink polka dot-covered balls, as they are completely charming. In fact the title (Dots Obsession--Love Transformed into Dots, 2007) indicates that they stem from a positive emotion. The reason I bristled is that I kept recalling a photograph from the AGO by the same installation (shown above) where I'm wearing clothing fated to be cut off of me by emergency room staff only a few hours later. Realizing that the show was a trigger, I declined shifts in the very Kusama Lounge that I helped plan, instead becoming oriented in reference so I could provide backup upstairs in the library while my staff engaged lounge visitors. 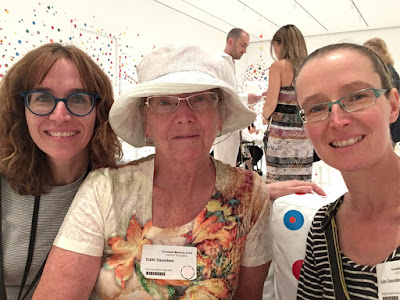 Over the course of the show, unexpectedly, traumatic associations began to be weaken as new memories formed. For weeks on end, my proudest moment every weekday was remaining steady while using the curb at the north entrance of the museum as a balance beam, cheered on by Kusama’s whimsical polka dots covering the tree trunks nearby. My mother and sister (pictured here) brought my nephew to see the show with me, and my husband joined me later, sparking no negative responses. So fine were these experiences that my husband and I returned to the Mattress Factory in Pittsburgh to see my favorite Kusama installation. Back in Cleveland, I offered to write an institutional blog post about the Kusama Lounge; helped coordinate a book display outside of one of the screenings of Kusama - Infinity, the documentary about the artist; and watched said film not once but twice. Now that the show is in its final week, I am starting to put the poignant and the penultimate behind me and facing a future of infinite possibilities. To borrow translated wording from a poem by Kusama--who (as the film shows) experienced childhood trauma, sexism, the stealing of her art ideas and a related suicide attempt, plus public shaming for her use of nudity in art happenings--“I collected my thoughts and got up again.” 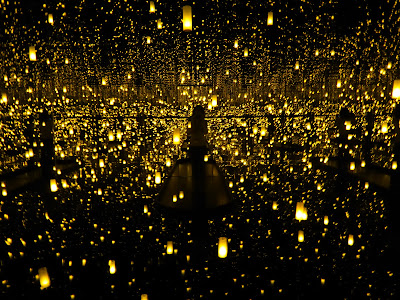 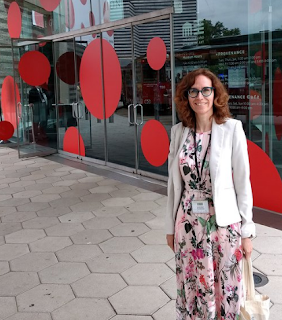 To acknowledge that the meaning of the show has evolved for me personally is timely because this week, the Cleveland Museum of Art hosts the inaugural Keithley Symposium with Case Western Reserve University’s Department of Art History and Art and the Baker-Nord Center for the Humanities. In this symposium--for which I am conducting a workshop about the serendipitous discovery of social context in artists’ clipping files--the theme is the life of art objects and how their meaning shifts as time passes.

Infinity director and Ohio native Heather Lenz attended screenings of her film on September 22 and 23 at the CMA. At the screening on the 23rd, a theme of resilience ran through Lenz’s Q&A that resonated with me. She described Kusama as “really ahead of her time,” yet lacking recognition for a long time, which was a situation compounded by sexism. Lenz shared, “The thing that propelled me...[was that in] undergraduate...art history...I probably learned an average of 1,000 male artists for [every] five female artists.” She set about “[r]ighting this wrong in history.” Lenz observes that Kusama’s story has a happy ending, for she has achieved immense success; while there are many ways to define success, but one example is the fact that she’s the top selling female artist alive today. Lenz said with satisfaction, “Her time has arrived!”

Lenz reflected on the fact that it took 17 years to create the film, because of massive challenges like securing funding and convincing people that a “foreign female” subject was worthwhile. She said that ultimately, the process was, “[h]arder than I [she] thought.” She noted that in the film industry, one makes sacrifices that may or may not be practical with no guarantee that things will work out. In the end, though, her “passion project” premiered at the Sundance Film Festival, and based on the applause at the CMA, it’s winning over audiences.

Posted by Heather Saunders at 4:02 PM