Reading as Recovery: Black Out

“Martha Ann Honeywell...was born without hands, yet she worked for 50 years sewing and producing silhouettes with an arm stump, her feet (with only three toes on one foot), and her mouth. Talk about a role model for me as I convalesce.”

A full season has passed since my last blog post, but my excuse is much better than lying on the beach: I have been busy narrowly avoiding paralysis and death as a passenger in a harrowing roll-over automobile crash, to say nothing of learning to walk again.

Early in my hospital stay, I was shown a photograph of my face. Two bloodshot eyes stared blankly back at me. No, not bloodshot—blood-filled; the whites had been eclipsed by a brilliant shade of cranberry. Surrounding my eyes were two purple shiners, aptly called Battle signs. The cranberry-purple combination caused children and adults alike to recoil. Eventually, the bruises migrated down my face, drooping into concentric oblongs suggestive of skin melting. It was an illusion exacerbated, at least in my mind, by skin hanging off of my bones as my weight plummeted to double digits. My unintentional gauntness caused the adult diapers I was given—designed for someone twice my size—to feel further undignified. In the intensive care unit, I made the physiotherapist chuckle by saying I wanted to make t-shirts that said, 'dignity is overrated.' It was a perspective I developed while prioritizing (read: trying to survive).

Once I was well enough to reach the restroom, I looked in the mirror but didn’t recognize myself. Then again, I couldn’t see anything clearly, since airbags had snapped my glasses in half. Curiously, I hadn’t noticed I was without glasses when I regained consciousness in the car, but I was in shock and fixated on the heinousness of dirt in my mouth. When I finally selected a replacement pair, I still didn’t look right. Even now, when someone compliments my frames, irrationally, I feel wounded. Adding to my probable dysmorphia is the fact that I couldn’t twist my torso after surgery to style my naturally wavy hair, so I got a perm. The curls look uncharacteristically tight and no amount of conditioning makes me feel like my former self. I keep having my hair cut shorter and shorter to get rid of it, and in turn, I dissociate from my appearance. At one hair appointment, I finally felt--with relief--an affinity with my appearance when I was seated in a different area and my reflection was spread across multiple tiny mirrors and fractured, like me.

I decided to buy a few accessories and items of clothing to perk myself up. But then I kept spending. I bought an Alexander Wang top with a partially open back revealing almost the whole spine, forgetting the six inch incision a surgeon made to stabilize my severe lumbar brake. (One broken bone per person is to be expected from crashing with the same force as driving off a 12-story building). By the time I remembered my scar, the garment was no longer returnable. I purchased, and kept, a BCBGMAXAZRIA dress in two sizes because who knew what size I was, really? These garments were second-hand, but still... On week-ends, I awoke at 6 am, eager to discover what online deals I might score. I withdrew from friends and allowed myself to see a collection of amiable hand-written notes from online sellers as evidence of a social network. Because I had survived against all odds, I imagined that it must have been for a reason, and the related pressure to do something meaningful (or more meaningful?) with my life was crushing. So, by shopping, I embraced the most superficial aspect of myself--although I do consider fashion/style an art form. How could I not, as a former textiles student? The truly embarrassing thing is that I embarked on this slippery slope after reading the tell-all post by stylist Stacy London about almost going broke further to having the exact same surgery. I read it and actually thought, "Shopping sounds like a good idea." That I nearly succumbed to the endorphins and dopamine associated with shopping while changing up nearly half of my wardrobe is ironic because I was ultra-responsible about withdrawing from opiates to avoid a well-known addiction risk.

When I spotted Black Out: Silhouettes Then and Now (Princeton University Press, 2018) in our new books display, my eyes welled up. Not only had I gotten black eyes when I blacked out, but pitch-blackness prompted a flashback the first night I was home from the (always bright) hospital. Awakening in the night unable to see anything, I thought I was trapped in the car again; when I realized I was safe, I was a split second away from emitting a series of five screams that had queued up in my throat. Moreover, when I encountered this book, it was as if I sensed the inclusion of relatable passages like “...vanished into the vacuum of her silhouette” (p. 57)--relatable because in addition to the details I have shared thus far, I had lost track of the number of times my personhood was flattened and reduced to black and white as I was shunted painfully onto a wooden board for an x-ray or MRI. Thank goodness this catalogue began to shift me from a vortex of interchanging self-images into the more intellectual and frugal past-time of reading.

I brought the catalogue home, but I felt unable to even peek at the introduction for two weeks, as getting back to enjoyable activities like blogging would signify moving forward. All along, though, I have told myself that I cannot get stuck for long. Another two weeks passed before I read the essays within, finishing them in an afternoon because they were so compelling. The next day (today), before I read the final section of didactic texts for works in the associated exhibition, I was reminded that it’s the one-year anniversary of the white nationalist rally that turned deadly in Charlottesville. (Activist Heather Heyer died after being hit by a car, and shortly thereafter, Lieutenant H. Jay Cullen and Trooper-Pilot Berke M.M. Bates died while monitoring the scene from a helicopter). Because race is a recurring theme in Black Out, today feels like the perfect time to come out of the shadows and resume my role as one of many bloggers seeking social justice. So, more on this fantastic catalogue... 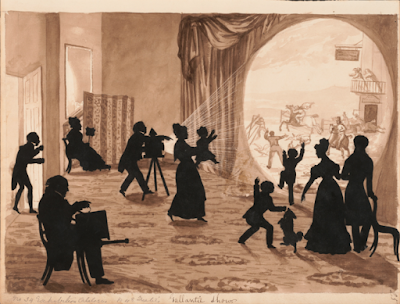 Before the advent of photography in 1839, silhouettes were a widely and wildly popular memento in the United States. In the late 18th Century, varied subjects, such as European settlers, Native Americans, and enslaved or formerly enslaved people, began to have their contours traced onto paper and cut out. The small portraits existed at the liminal divide between art and craft because they could be produced for only a few pennies and in a range of settings, from taverns to art galleries, by both artisans and artists. Techniques also varied: some silhouettes were produced by candlelight, and others had greater precision thanks to a machine called the physiognotrace.

As a democratic art form, silhouettes could even be generated by the subject. However, to have one’s silhouette made by another hand introduced a performative element, functioning as a means to construct self-identity, which was important in an era of asserting political independence, as argued by Asma Naeem, Associate Curator of Prints, Drawings, and Media Arts at the Smithsonian National Portrait Gallery, who organized the Black Out exhibition. My phrasing of ‘another hand’ isn’t entirely accurate, incidentally. One of the better known silhouettists, Martha Ann Honeywell, was born without hands, yet she worked for 50 years sewing and producing silhouettes with an arm stump, her feet (with only three toes on one foot), and her mouth. Talk about a role model for me as I convalesce.

As Naeem points out, at a time when slavery was contested, oddly, an aesthetic flourished that rendered everyone black. That’s not to say there weren’t racialized differences in representation. For example, superfluous details were added by the best known silhouettist, Auguste Edouart, to depictions of white people, like props of sophistication (tea cups, sheet music, etc.). In contrast, depictions of enslaved people, which were made for reasons like aiding recovery if they escaped, featured minimal physical attributes. Also, the identities of enslaved people were often obliterated in silhouettes, as demonstrated by the scrawling of “Mr. Shaw’s Blackman” above a portrait. Abolitionists tended to promote their cause by referencing silhouettes of enslaved people with details added using chalk or colored pencil, representing some recovery of identity. There were also occasional celebratory silhouettes of African Americans, such as Rev. Abssalom directly, the first African American Episcopal priest. Another example of limited celebration is the art historical oversight of contributions by silhouettist Moses Williams, a former enslaved person. Although he produced tens of thousands of silhouettes with the physiognotrace, attributions to him have been lacking.

The catalogue’s design, by Ray Brooks (Fold Four, Inc.) is noteworthy. Black matte paper, similar to what would be used for silhouettes, is included in the front and back matter (before the half/Bastard title and after the colophon). The catalogue title is cleverly written in a font without negative space (there is no triangular space for a capital ‘A,’ for example), as is the title of each essay. Although silhouettes would translate well into black and white, they are included in full color. The images are of a generous size, often bleeding to the edges or occupying a portion of the accompanying page. There are some gems, like a lesbian double portrait in which two life partners face one another, and Edouart’s complex work, The Magic Lantern (1826-61), containing 10 silhouetted figures, which is featured on the inside front and back cover and opposing pages.

Thank-you for reading. It’s good to be back.

Top image: Gearing up for an 8-hour ambulance ride. Outside for the first time in over a week, I am trying to take in the sights through my sister's old pair of glasses, and delighting in the fresh air.
Posted by Heather Saunders at 5:05 PM